The Friendliest Element on The Periodic Table

It binds readily to other elements and its uses vary from nuclear weapons to tooth care and from skillet coating to climate change. Everything about fluorine

Somewhere, at the top of the halogen family in the periodic table one finds the element fluorine (F), the lightest member of the halogen group. This placement is important, as it implies that fluorine very readily accepts an additional electron from other elements. This property, termed electronegativity, common to all members of the halogen group, is especially strong in fluorine. In fact, being the most electronegative element, fluorine is the atom with the greatest tendency to attract electrons from other elements towards itself.

Despite being a light element, merely the ninth on the periodic table, fluorine is relatively rare, especially compared to its much more commonly found neighbors carbon, nitrogen and oxygen. The reason for this is that the nuclear fusion reactions that occur within stars and create heavy elements from light elements produce relatively small amounts of fluorine, compared to the slightly lighter or slightly heavier elements. In addition, unless ejected from the core of the star in which it formed, the fluorine that forms undergoes additional processes that convert it into other elements.

Fluorine is a non-metal, and under normal pressure and temperature conditions it exists as a yellowish gas of diatomic fluorine molecules (F2). However, it is hardly ever found in this form, as it is the most reactive element in the periodic table. It reacts with almost any other element - with most elements this occurs immediately at room temperature, while with some – such as gold and other noble metals – it reacts only at higher temperatures. It is therefore very difficult to store it in the form of pure gas, and it is found in nature only in the form of a compound with other elements. 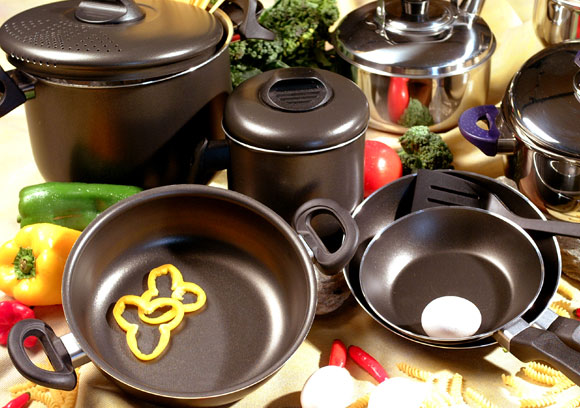 Fluorine creates a wide variety of compounds. Due to its chemical properties, it tends to create very strong bonds with other elements, and thus compounds containing fluorine tend to be quite stable. This has many advantages: for instance, if one takes hydrocarbons - chain molecules of carbon atoms to which only hydrogen atoms are attached - and replaces all hydrogen atoms with fluorine, this results in  water repellent materials that can be used for coating to create water-repellent surfaces.

An example of such a material is Teflon, a very stable substance in which all the hydrogen atoms have been replaced with fluorine. This exchange confers Teflon with its useful properties, such as low friction and water resistance – hydrophobicity, making it useful for coating for pots and pans. Teflon is also a very chemically inert substance, as very few substances interact with it, making it highly durable.

The disadvantage of such materials is that they pollute the environment and disintegrate very slowly in nature. The reason for this is that although energy can be produced from their breakdown, no known microorganisms can degrade them, since they are entirely synthetic and do not resemble any naturally occurring materials.

The fluorine is so reactive that it can even react with noble gases that do not tend to create compounds with any element under standard conditions. Compounds of fluorine and xenon, for instance, are stable molecules that do not break down on their own, even though they too are very reactive. They can also be obtained by a reaction between fluorine and xenon under the influence of sunlight or ultraviolet light.

What happens when fluorine reacts with another reactive substance? A video from the British Royal Institute:

Pure fluorine gas is of relatively little use. Since its reactions can emit a lot of energy, it could theoretically be used as rocket fuel. However, due to its very reactive and highly toxic nature, this would be too dangerous.

Gaseous fluorine was first used in World War II in the Manhattan Project – which led to the creation of the first atomic bombs. In order to enrich uranium it was necessary to produce the compound uranium hexafluoride (UF6), in a process that required a reaction with gaseous fluorine. This was also where Teflon was used for the first time, as it is one of the few materials that can withstand exposure to gaseous fluorine and not react with it. To date, the main industrial use of gaseous fluorine is for this purpose.

Most other uses of gaseous fluorine are in the production of compounds containing a large number of fluorine atoms, which are of importance in industrial processes. One such compound is sulphur hexafluoride (SF6), an important industrial gas.

Organic fluorine compounds, in which a fluorine atom is bound to a carbon atom, are also useful: besides Teflon, many medications contain fluorine as do many of the modern-day anaesthetics. One of the most important groups of fluorine compounds used in the past are the chlorofluorocarbons, the best known of which is Freon, which we will elaborate on later.

Another important compound of fluorine is hydrofluoric acid (HF), which is not organic. Although this is not a very strong acid, it is nonetheless very dangerous and corrosive and can easily cause burns to the skin. HF has many industrial uses. One of its unique properties is its ability to dissolve silicon dioxide (SiO2), which is a fundamental constituent of glass, quartz and sand. Therefore, among other things, it is being used for etching on glass as well as in the semiconductor industry.

What happens when an incandescent light bulb is dipped in hydrofluoric acid? A video by Periodic Videos:

People have used fluorine even before it was recognized as an element. It has been discovered as early as the 16th century that addition of calcium fluoride (CaF2), which occurs in nature in the form of the mineral fluorite, to metal ores, reduces their melting temperature, thus facilitating metal production. In fact, this process also coined the name of the element, which was derived from the Latin word ‘Fluere’, meaning “to flow”. To this day, this remains the main industrial use of fluorine compounds.

Hydrofluoric acid was first isolated in the second half of the 18th century, and its ability to melt glass was also discovered then. In 1810 it was first hypothesized that the acid contained a then unknown element, similar to the chlorine found in hydrochloric acid. Only 76 years later, in 1886, did the Jewish-French chemist Henri Moissan succeed to isolate fluorine gas from the acid, after much trial and error and exposure to dangerous levels of hydrofluoric acid. For this he was awarded the Nobel prize in chemistry in 1906.

Even before Moissan, many people tried to isolate the unknown element from hydrofluoric acid. However, due to the properties of the acid and of fluorine itself, even those who succeeded in producing small quantities of it were poisoned, with some even losing their lives in the attempt. Moissan’s method of production, based on electrolysis of the acid, is used for industrial purposes to this day for the production of gaseous fluorine. 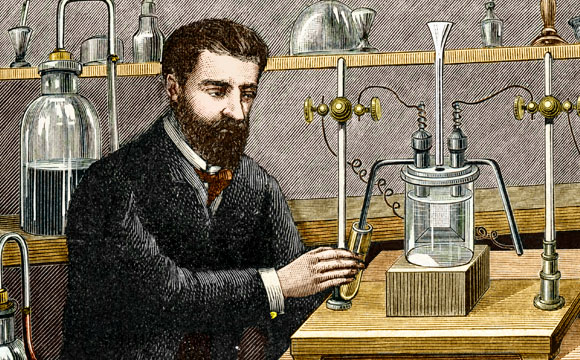 Succeeded where others failed and paid with their lives for the attempt. Moissan isolating fluorine | Source: Science Photo Library

The chlorine atom, which resides under fluorine in the periodic table and is quite similar to it, frequently forms salts, which are ionic compounds where chlorine is the negative ion. In contrast to chlorine, fluorine salts are not common in Earth’s oceans and are not extracted from them. Fluorine usually occurs in nature in water-insoluble minerals, such as fluorite – the above mentioned calcium fluoride - which is also the main source of fluorine production.

The mineral fluorapatite, which also contains calcium, phosphate and oxygen, is the main form in which fluorine occurs on Earth. However, it also tends to appear in very low concentrations of single percentages in minerals which are similar in chemical structure but do not contain fluorine. These minerals are the main source of phosphorus and phosphate fertilizer and fluorine is simultaneously extracted from them as a byproduct of phosphate fertilizer manufacturing.

Fluorite appears in different natural structures with varying degrees of contaminants and has therefore many colors in nature. A different type of apatite (hydroxyapatite) is the main mineral that makes up the enamel of our teeth, and due to the higher strength and resistance to decay of fluorapatite, fluoride is used to protect teeth against dental decay and is used as a component of most toothpastes. 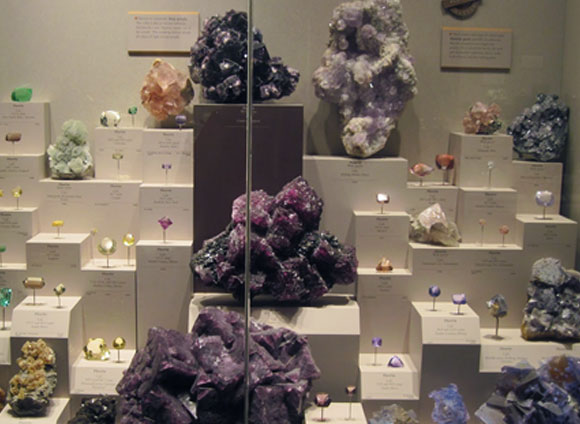 All the minerals in the picture are fluorite. An exhibit at the Smithsonian National Museum of Natural History, USA | Photo: Uri Teichman

Apart from its influence on teeth, fluorine does not have an important biological role, and it is virtually non-existent in animals’ bodies, including humans. It is not essential for plants either, but some plants are able to absorb it and use it to create toxic compounds as a defense mechanism against herbivores. One of these substances is sodium monofluoroacetate, which also has an industrial use as a pesticide.

Many fluorine compounds have a damaging effect on climate, mostly by degrading the ozone layer in the atmosphere. Many compounds of carbon, chlorine and fluorine (chlorofluorocarbons), such as Freon, were used in the past as gas coolants, until it was found out that they contribute to ozone depletion and constitute the main cause for the formation of the ozone hole. Following this revelation, the Montreal Protocol, signed in 1987, banned their use, an effort that was indeed very helpful in reducing the ozone hole. Despite this, they are still being used in developing countries, albeit on a limited scale.

These gases have now been replaced by chlorine-free hydrogen-containing compounds (hydrofluorocarbons) that hardly cause any damage to the ozone layer. However, they do tend to be very strong greenhouse gases that contribute to global warming, which further increases the incentive to avoid using them and to reduce their emission into the atmosphere. 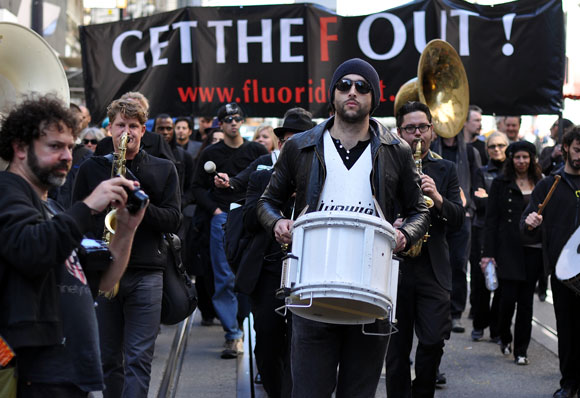 Not everyone is enthusiastic about the important achievement of public health. Protesters against water fluoridation | Photo: Shutterstock

It is impossible to wrap up without mentioning one of the most widely known uses of fluorine – water fluoridation. This is a process where miniscule amounts of less that one part per million – 1 milligram per liter of water – of the fluoride ion are added to drinking water. This is usually done by dissolving fluorosilicic acid in water, with fluoride being one of the breakdown products.

Even though fluorine and hydrofluoric acid are by themselves hazardous substances, the fluoride ion is not especially active and its toxicity level is low. The reason for this is that fluorine’s very strong tendency to accept an additional electron leads to a very low tendency of the fluoride ion to share its electrons, making it less likely to be chemically active. It can still be toxic at high concentrations, but these would be much higher than those occurring in water – one would have to drink tens or hundreds of liters of tap water a day, or swallow a few dozen tubes of fluoride containing toothpaste to reach poisoning levels.

The amounts added to water are too small to cause any damage, but high enough to substitute some of the mineral in teeth from hydroxyapatite to fluorapatite, which has similar properties but is stronger. This way, tooth enamel becomes more resistant to cavities.

Water fluoridation is carried out in places where the concentration of natural fluoride in water is not high enough, and as a result, hundreds of millions of people around the world drink fluoridated water. The World Health Organization ranked water fluoridation as one of the ten greatest achievements of public health in the twentieth century.