What Is the Origin of the Elements?

There are a little over one hundred elements in the universe. How were they created?

A relatively small number of elements make up our entire existence. Our body, Earth, the Sun, and everything we know in the Universe is composed of a pool of a little over one hundred different atoms. That is it. Most of us are familiar with Mendeleyev’s periodic table of elements, which ingeniously maps the elements by their properties. Many of us are also aware that the atoms of these elements make up all the material in the universe. But have you ever asked yourself where did these atoms come to Earth from, and what was their source?

Updated evaluations say that 73% of all the material in the Universe are hydrogen atoms and an additional 25% are helium atoms. Everything else makes up a meagre 2% of the remaining material in the universe. Moreover, delving deeper into the secrets of astronomy reveals that atoms account for only 12% of the Universe and that most of it, some 72%, is composed of something not altogether understood, called ‘dark matter.’

One of the reasons that this information is so surprising is that the situation on Earth is very different. The most abundant element on Earth is oxygen, followed by silicon, aluminum, and iron. Hydrogen comes in tenth. And yet, it must be remembered that our planet and everything on and in it are responsible for only a tiny fragment of all the material in the Universe.

Build yourself an atom

The process in which new atomic nuclei are made is called nucleosynthesis – the fusing of nuclei. The lightest elements were created right after the Big Bang, from the plasma of crystalizing sub-atomic particles. At that point, around three quarters of the material in the universe was hydrogen atoms and the remaining quarter was helium atoms. Aside from them there were tiny amounts of lithium and beryllium – and that’s it.

The heavier elements were created from hydrogen later, in a process known as stellar nucleosynthesis. This was an extended duration process, in which, during various stages in a star’s life, hydrogen and helium were fused together in nuclear fusion within the stars, which served as giant furnaces. This process led to the emergence of carbon and a significant proportion of the elements that follow it in the periodic table. The process’ products eventually dispersed from star into the interstellar gas and created nebulae.

Most of the even heavier atoms were formed in the nucleosynthesis of a supernova. This, too, is a process of nuclear fusion, but these reactions require enormous amounts of energy which is available only in the most massive stars when they are at the stage of a supernova. The stage when a giant star explodes is when the nuclear fusion occurring within it exhausts itself and is no longer able to prevent the star collapsing in on itself due to the force of its own gravity.

Elements lighter than carbon but larger than hydrogen and helium, were created by cosmic ray spallation. In this process, cosmic rays impact with the nuclei of larger heavier elements and shatter their nuclei so that lighter nuclei are created such as lithium, beryllium, and boron.

The heaviest elements, those at the bottom of the periodic table, are created by man. That is, they were artificially created by accelerating relatively heavy nuclei in particle accelerators and colliding with each other at immense speed and incredible force. The collision creates heavy nuclei, which usually are not stable and fall apart in a fraction of a second.

Some elements can be generated in different processes, as shown in the chart below, when recently it was found that lithium can also be created by nucleosynthesis of a supernova. 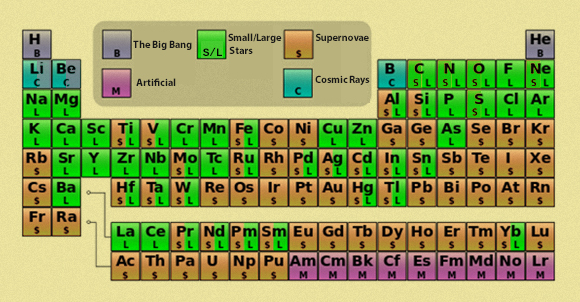 The periodic table. The color coding shows the source of each element. Source: Wikipedia.