Nursing and milk consumption are not exclusive to mammals. Birds, bugs, spiders, and even fish feed their offspring with milk-like liquids

Pentecost (Shavuot) has just passed and with it, the age-old custom – at least among Ashkenazi Jews – of eating dairy foods. Milk is the first food that we mammals consume. Produced in special glands in the female body, the mammary glands, females secrete it as food for their young. It is extremely nutritious and some mammals even consume it as adults, like wild cats seen stealing milk from northern elephant seals in Guadalupe. So basic is milk consumption to mammals, that they were named after the Latin word for breast (mamma).

Nevertheless, it turns out that additional parents in the animal kingdom secrete nutritious food to nourish their young, a food with a similar function to that of milk in mammals.

I give you bird milk

Bird milk is not only the name of an eastern European dessert. Pigeons and their relatives, flamingos, and even the male emperor penguins secrete “milk” as food for their hatchlings. This bird’s milk is mostly known by the name “pigeon milk,” because for many years, pigeons were the only bird known to produce milk. It is also known as “crop milk,” so named for the secreting organ – the crop, an expanded muscular pouch at the base of many birds’ esophagus that serves to temporarily store food.

Pigeons’ feeding crop milk to their chicks was reported as early as 1786. In other birds it was documented only in the mid-twentieth century.

A few days before the squabs (baby pigeons) hatch, the levels of a hormone called prolactin – the same hormone that is critical for milk secretion in mammals – rise in the parents. As in female mammals’ mammary glands, the crop of both male and female pigeons changes in response to the hormone and begins producing the milk: The cellular tissue comprising the crop’s inner lining (epithelial cells) grows, and the cells fill with fats and other nutrients; these cell then detach and constitute the crop milk. Unlike liquid milk in mammals, crop milk is a suspension of numerous cells in the liquid, with a texture reminiscent of cottage cheese.

To feed their young, the pigeons regurgitate the crop milk and the hatchlings eat it directly from their parents’ throat. For the first few days after they hatch, the squabs feed only on crop milk. They continue to consume crop milk for up to two weeks, until the prolactin levels decrease and milk production stops.

Pigeon milk is very nutritious, rich in fats and proteins, more so than human or cow milk, and low in carbohydrates. A 1950s study showed that chickens whose food was supplemented with pigeon’s milk weighed 38 percent more than chickens that didn’t consume the milk. Pigeon milk even affects the expression of genes associated with the immune system. It contains minerals, antibodies, hormones, and bacteria that are essential for chicks, and if the chicks don’t get it, but are fed other nutritious substitutes, are at a higher risk for developmental problems and even death. 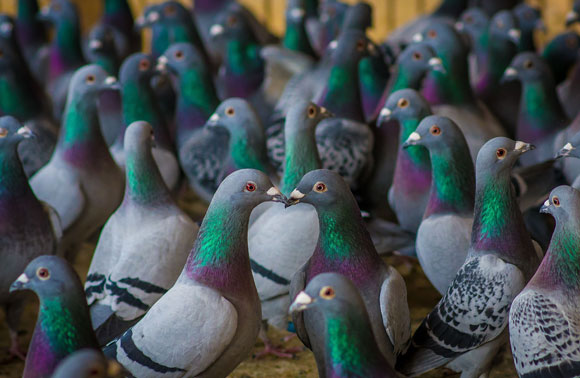 Pigeon milk is richer in proteins than human or cow milk, and contains other beneficial components. Photograph: Shutterstock

Flamingo chicks feed exclusively on crop milk for a while, a few months, until their beaks develop all the necessary special structures required for filtering their food from the water. The chicks’ cries encourage prolactin secretion and milk production, and sometimes even flamingos that aren’t the chick’s parents will submit to the cries and feed it.

Flamingo crop milk is produced by both the male and the female and not only in the crop, but throughout the entire upper esophagus. It is richer in fat than pigeon’s milk, but contains less proteins. It has a red color and contains red and white blood cells and carotenoids, the food-derived pigments that give flamingos their bright pink color.

Producing milk for months on end as the chick grows takes a toll on the parents: they lose weight and their color is depleted, and even the milk they secrete fades in color, to a light pink or even white. But once the chick matures and starts getting its own food, milk production in the parents stops and they regain their vigor.

In emperor penguins (Aptenodytes forsteri), it is the males who produce milk, and only occasionally. Once the female lays the egg, she hands it over to the male for the winter-long incubation, and leaves for several months of feeding and gaining fat. Throughout this period, the male incubates the egg without eating, losing most of his body weight. The females usually return just ahead of the hatching; but if the chick hatches before the female returns, the male feeds it with “crop” milk he produces in his esophagus, since penguins don’t have crops. The male produces milk for about a week; if the female fails to return by then, the chick will die. If the female returns on time, she and the male alternate in watching over and feeding the chick with regurgitated fish they caught. 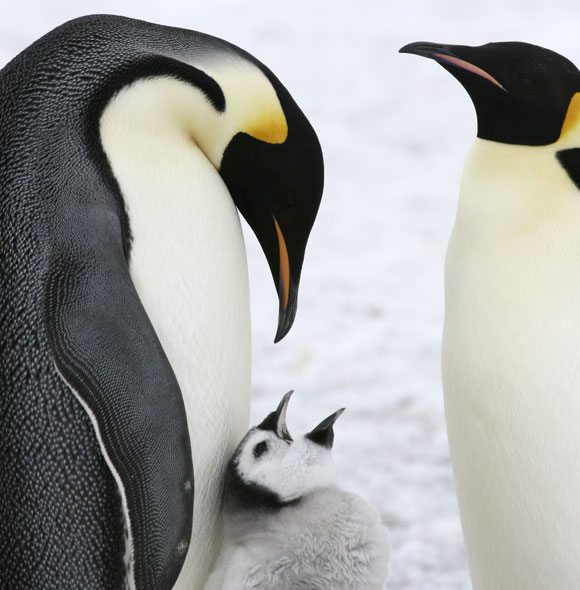 The male doesn’t only sit on the eggs, he also produces milk and feeds the chick. A family of emperor penguins. Photograph: Shutterstock

Most cockroach females lay their eggs in a durable egg case that they secrete, which protects the eggs. Despite this, the female Diploptera punctata cockroach doesn’t lay an egg case, but births live offspring. Around 12 nymphs develop inside her body and feed throughout their development on a “milk” rich in carbohydrates, fats and proteins. This cockroach milk contains 3.5 times more energy (calories) than the equivalent amount of cow’s milk, but don’t worry, it’s not suitable for human consumption.

The developing cockroaches aren’t connected to their mother by an umbilical cord, but swallow the milk with their mouths, like baby mammals. In the cockroaches’ gut the milk turns into solid crystals, that are digested slowly and serves as an available food source over a long time which helps them to develop faster and come out of their mother’s body big and strong.

The female tsetse fly (Glossina), a fly that feeds on blood and spreads the trypanosoma parasite which causes the sleeping sickness, also feeds its young while still in its body. Each time a single larva grows in the fly’s body for ten days, until the time when it is ready to pupate. At this point the mother spawns a fat larva, nearly the same size as the mother, and the larva quickly tunnels into the ground and pupates. After around a month an adult fly will emerge.

The spawned larva is especially chubby since its body is full of its mother’s milk, which will continue to nourish it through its pupal stage. The milk that the larva nurses on in the mother’s “womb” is secreted by milk glands that develop during the “pregnancy”. The milk secreted by the mother is initially composed primarily of fat, and as the larva develops, it will contain balanced amounts of fat and protein, just what the baby needs. Once the larva is spawned, the mother’s milk glands quickly atrophy, until the next time.

The quality and quantity of the milk depend on the mother’s diet. If she won’t consume enough blood, the milk she produces won’t be nourishing enough and the larva won’t develop or will not complete the pupation.

he spider that nurses until adulthood

Less than a year ago, researchers from China discovered that females of the jumping spider, Toxeus magnus, “nurse” their young.

While not considered to be social spiders, jumping spiders live in small colonies. It turns out that in many cases, these small groups consist of an adult female and several young individuals – a mother and her offspring.

In lab observations, the researchers noticed that after the spiderlings hatched in the nest, neither they, nor the mother, leave the nest for almost three weeks. During this time, the spiderlings feed exclusively on the milk-like fluid that the mother produces, which has a high protein content – four times higher than cow’s milk – and also contains some fat and carbohydrates.

Initially, the mother deposits milk droplets on the nest’s internal surface and the spiderlings suck them, but when they grow, they “nurse” directly from the mother, from an opening in her belly, which is also her egg-laying opening. As the spiders grow, they start to leave the nest to forage, but still return to their mother to nurse.

Even after they’ve been weaned off of the milk, at 40 days old, the almost-mature spiders return to the breeding nest for some maternal care – removal of parasites and old sloughs and nest maintenance. This nurturing behavior ends, at least towards the males, when they reach full maturity (at around 52 days of age). At this point, the mother still allows her daughters to visit, but prevents the males from visiting, perhaps in order to reduce inbreeding. 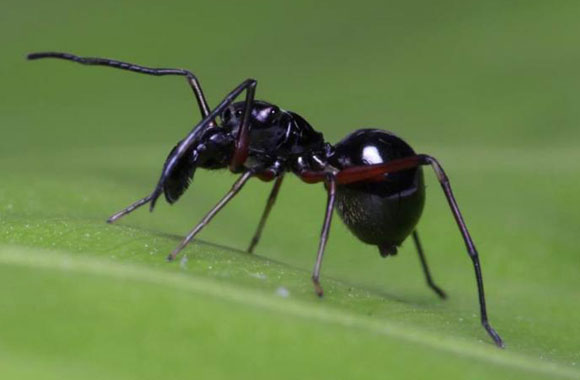 A shark in its mother’s milk

Sharks reproduce in various ways: some lay eggs, some spawn and the eggs develop inside the mother, and others reproduce just like mammals, with a placenta and an umbilical cord that nourishes the fetus. These sharks are even born with a navel, a belly button, which disappears after several weeks.

Nevertheless, despite the similarity, placenta-bearing sharks do not produce milk. It is actually the female great white shark (Carcharodon carcharias), which reproduces by spawning, that provides its five-to-ten gestating embryos with a fat-rich milk secreted in her womb. Great white shark embryos feed on milk only for parts of their development: on their very first days, they nourish from a yolk sac adjacent to their bodies; later, they feed on the viscous milk that is secreted in the womb; and near the end of the gestation period, they feed on unfertilized eggs produced in the womb. The womb also supplies them with oxygen.

Thanks to this diverse diet, the young sharks spawn, without having devoured one another in their mother’s womb, when they weigh more than thirty kilograms and are about a meter and a half long; quite safe from most ocean predators. Some stingray species, a relative of sharks, also nourish their embryos with milk in a similar fashion. 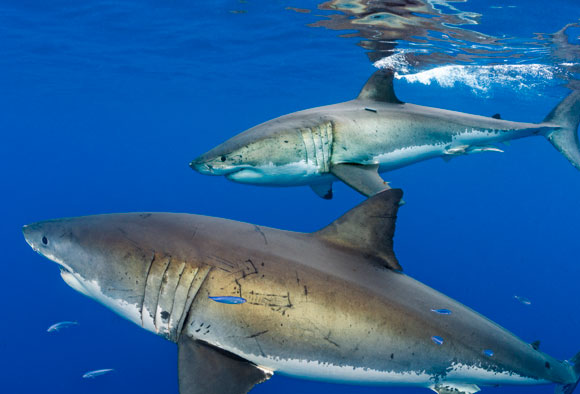 The young sharks are spawned at a length of a meter and a half after months of feeding on milk and eggs in their mother’s womb. A great white shark. Photograph: Science Photo Library

Even though we call ourselves “mammals”, this characteristic is not distinctive only to us. The animals mentioned here are examples of non-mammal organisms that nurture their young and feed them with a special food produced in their body, which is not only similar to milk in composition and function, but sometimes even more nourishing than mammalian milk. Indulging on cheese cakes and other dairy products (or their vegan substitutes) is a great opportunity to remember the huge variety of nourishing solutions that have developed over the course of evolution, and to note one more thing we share with birds, bugs, fish and many other animals.