A Storm In A Teacup

Aside form fresh water, coffee and tea are the most consumed beverages in the world. Their popularity has to do with the abundance of stimulanting and arousing substances found in them. For the respective plants, however, these substances constitute a chemical means of defense against pests and harsh weather conditions. Humans have learned over the years to dilute these substances and modify them, and have fallen in love with their flavor. Tea leaves and coffee beans share common defensive substances, such as caffeine, which is primarily associated with coffee, and polyphenols which we will focus on here.

Tea begins its journey as a leaf, rich in enzymes that determine the character of the resulting cup of hot beverage. Where does its unique flavor come from and what are the differences between different types of tea? In order to answer this, we offer a delicious recipe for making green tea cookies.

1. Mix all dry ingredients, except for the sugar, in a bowl to attain a uniform greenish mixture.

2. Whisk the butter and sugar in a food processor until an airy smooth mixture forms. Add the egg and vanilla while whisking. Continue to whisk and gradually add the mixtures of dry ingredients, in small portions, until the resulting dough separates from the bowl. Wrap the dough ball in plastic wrap and roll into a 5 cm diameter roll. Wrap the edges well too and refrigerate for at least half an hour.

3. Remove the dough from the refrigerator, remove the plastic wrap and slice into slices, about 1 cm thick. Arrange the slices on baking paper and bake in an oven, preheated to 180 degrees Celsius, for 12 minutes, until the cookies begin to brown. Cool and eat. 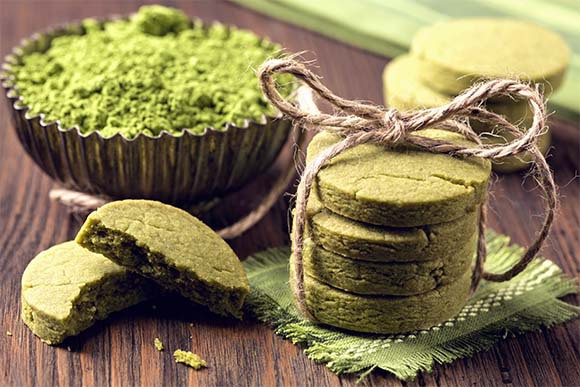 There’s nothing like green tea cookies to help understand the chemistry behind the processes that the beverage undergoes from the field to the piping hot cup. Photo: Elena Schweitzer Shutterstock

And Now To The Science

The tea plant originated in Southeast Asia and southern China. Its name traces back to the Chinese word Chá, which describes a beverage prepared from the green leaves of the Chinese tea plant (Camellia sinensis). This plant has hundreds of different varieties, and over the years humans have developed methods to cultivate varieties that bear leaves of desirable properties. For nearly two thousand years, it has been known in southwest China that techniques such as pressing the leaves and heating them for a certain amount of time, facilitate the making of different flavors and shades of tea.

Fine tea is produced from the youngest leaves of the tea plant and from unopened leaf buds, which are not only the most delicate and vulnerable, but also the richest in chemical defensive substances and inactive enzymes. Today, most commercial tea is harvested by motorized machines, with no precise selection of the leaves, and thus the mixtures also contain ripe leaves which are less flavorful. 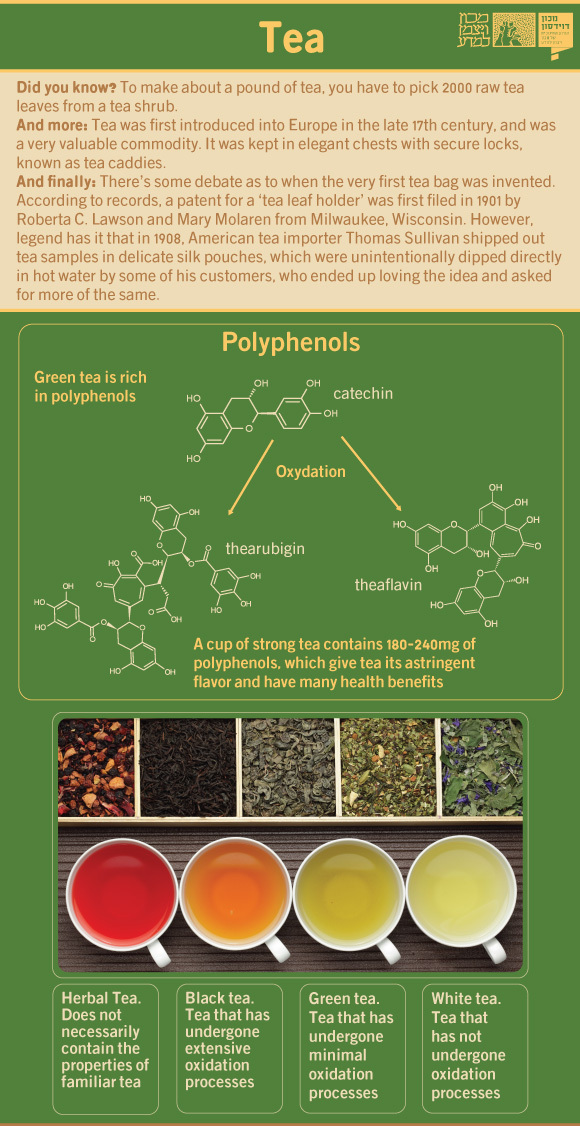 Soon after picking, tea leaves begin to wilt. The processing that the leaves undergo at this stage significantly extends their lifespan and both preserves and enhances their flavors. Wilting is a natural process that occurs in fruit and leaves after they have been detached from the plant, and for the process to take place under controlled conditions, the tea leaves are placed in well-heated and well-ventilated containers.

Wilting is a two-step process. The first step is the initial drying of the leaves, during which the water content of the leaf decreases by about 30 percent, which considerably changes its structure and adds flexibility that will later facilitate its shaping. The second step constitutes the many chemical changes that the leaves undergo during the wilting process.

Fresh tea leaves have a bitter and even a slightly pungent taste, due to their polyphenol content. Polyphenols are a variety of colorless compounds of the phenol family that protect the plant from pests. After picking, the leaves are crushed and left in the open air for a limited amount of time, to enable the activity of the enzymes (proteins that accelerate certain chemical processes) found inside, in the presence of oxygen from the air.

The enzymatic activity converts the phenolic compounds into differently tasting substances of darker shades. A short-term exposure to the enzymatic activity produces a very bitter and slightly pungent yellowish compound, called Theaflavin, while prolonged exposure produces, among other compounds, Thearubigin – a more complex compound that tastes a little less bitter. The longer the exposure, the darker and richer the taste of the tea. 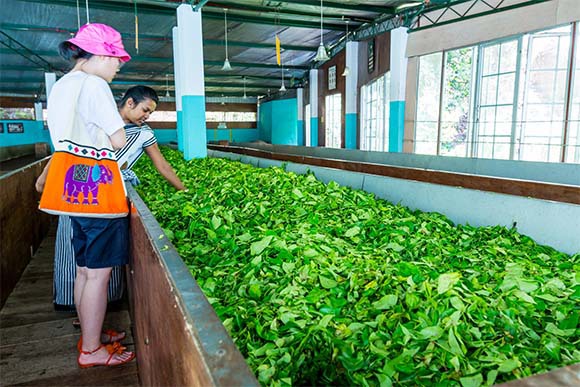 After the leaves are picked, they are crushed or otherwise injured to break down the cellular structure and release its contents. To control the flavor and intensity of the tea, the oxidation process of the leaves must be controlled, by strict regulation of the temperature and humidity under which they are kept. During oxidation, chlorophyll (the substance that endows leaves with their green color), is degraded by enzymatic activity, in a way that changes the color of the leaves as well as their fragrance and aroma. To slow the process of oxidation or to stop it completely, the leaves are transferred to a new storage place, where the temperature is higher. Heating damages or destroys the enzymes, and thus the duration and degree of oxidation can be controlled.

The oxidation process plays a key role in creating various flavor and aroma compounds that determine the type of tea eventually obtained. Unless carried out properly, undesirable flavors may be created.

After oxidation and processing, the leaves are dried one last time by streaming hot air along them. The final drying ensures cessation of the chemical reactions, and also impedes the development of bacteria and fungi. Tea leaves that are not completely dry could develop mold and their flavor would be ruined. 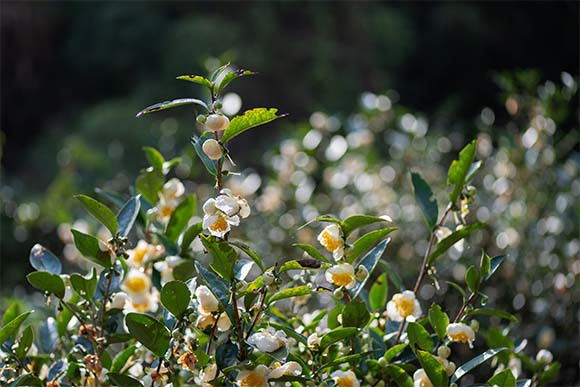 The origin of the tea plant is in Southeast Asia and southern China. It’s name originates from the Chinese word Chá, which describes a beverage prepared from the green leaves of the tea plant. Photo: ivebear chen Shutterstock

The final processing stages that follow the drying process, determine the type of tea that will be obtained. During this processing, whole tea leaves can be used, or they can be broken up by crushing, tearing or rolling, thereby aiding them in releasing their flavor and color substances into the water, while cooking or brewing. The downside is that the shelf life of broken tea leaves is shorter than that of whole tea leaves, as they lose their flavor and color faster.

The huge variety of tea types offered for sale in stores and markets stems not only from the variety of plants from which the leaves came from or from the processes of wilting and oxygenation, but also from additional processing stages. Some tea leaves are fermented using fungi or bacteria; others are aged, much like wine, in order to enrich their flavor; and some are wrapped in paper or cloth. The most common types of tea are white, green tea or black tea, and each one of these undergoes different treatments during wilting.

White tea: Immediately following picking, the leaves are steamed to inactivate the oxidation process at the very beginning. Thus, these tea leaves contain an amount of polyphenols similar to that of the original leaves.

Green tea: The leaves undergo only short-term oxidation, leaving the level of polyphenols in the tea similar to that of  fresh-leaf tea. During cooking or brewing, the water becomes light yellow or greenish-yellow and a delicately flavored tea is obtained.

Black tea: When the tea leaves are cut and wounded at an early stage, the enzymes in their cells are released, accelerating the oxidation processes. Therefore, black tea contains very small amounts of polyphenols – their molecules have been modified into new substances, which are responsible for its strong reddish-brown color and flavor.

A Cup of Tea For Your Health

Drinking tea has long been associated with health and wellbeing – and there may be some truth to it. Some studies indicate that black tea, and even more so green tea, may decrease blood pressure, cardiovascular disease, arthritis, diabetes and Alzheimer’s disease, and may even reduce the risk of certain types of cancer. However, other studies show contradicting results. Yet other studies have shown that compounds found in some types of tea may have a beneficial effect on immune system function and may harm bacteria and viruses.

However, most of the research studies on the health benefits of tea are observational, indicating only a circumstantial connection between tea drinking and various physical manifestations, and offering no causal explanation. Further research is required to reach clear cut conclusions regarding these effects, but it generally seems that daily consumption of tea is not harmful and could be beneficial for health. All that remains now is to prepare a hot cup of tea and enjoy its flavor.