Why Is Yellow Cheese Yellow?

The fat in milk, the grass eaten by the cows and even food coloring. Every yellow and its reasons

One of the dishes served very frequently at my parents’ table during my childhood was noodles with yellow cheese melted in the microwave, a dish known as “mac and cheese”, i.e. macaroni and cheese. Cheese is made from milk, which is white, how is it then that cheese becomes yellow? Is the color change a natural outcome of the cheese-making process?

How Is Cheese Made?

The answer to the question in the title depends very much on the type of yellow cheese in question. Yellow cheeses are usually hard or semi-hard, and it takes several weeks to a few months to produce them. The first thing that needs to be done when making cheese is to separate the milk protein, casein, from the other milk components, which include water (ca. 90%), sugars (ca. 5%) and fats (ca. 4%). The separation process is accelerated by the use of an enzyme, a protein that specializes in accelerating chemical processes, and the end result is protein-rich curd. To produce hard cheeses, a relatively large amount of enzyme is added, leading to the production of a hard curd. The curd can be compressed, formed into different shapes, coated in substances such as wax, and allowed to age. The amount of enzyme, level of compression, aging period and substances added to the cheese curd all affect the taste, texture and smell of the resulting cheese.

One of the oldest yellow cheeses is cheddar, usually characterized by its bright orange color. Production of this cheese, named after the English town, Cheddar, probably began as early as the beginning of the previous millennium. The accounts of King Henry II of England, show that in 1170 the royal palace purchased about four tons of cheddar cheese.  For hundreds of years the cheese was produced from the milk of Jersey or Guernsey cows that ate fresh grass. The grass they ate was rich in the pigment beta-carotene, which is responsible, among other things, for the orange color of carrots, pumpkin and sweet potato. Therefore, the milk of these cows is relatively rich in beta-carotene, which is why the cheese tends to be orange.

According to Paul Kindstedt, from the Department of Nutrition and Food Sciences at the University of Vermont, English cheese producers in the 17th century realized that they could earn much more money by skimming the layer of fat off the milk, producing butter from it and selling it separately. Removal of the fatty layer also removed the beta carotene, which dissolves well in fat; thus, in the cheese produced from the low-fat milk most of the color was lost. To make customers believe that they are still purchasing high-fat cheese, the creative manufacturers added orange food coloring to the cheese. They may also have wanted the color of the cheese to remain uniform throughout the year, and not to depend on the cows’ diet. 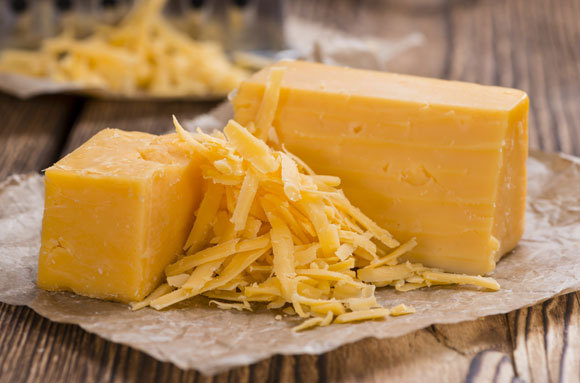 Another popular yellow cheese is Gouda (pronounced goo-duh), named after the Dutch city near which the cheese was originally produced. Similar to cheddar cheese, the color of Gouda cheese is also due to the addition of food coloring, usually annatto, which is extracted from a tropical tree called achiote. 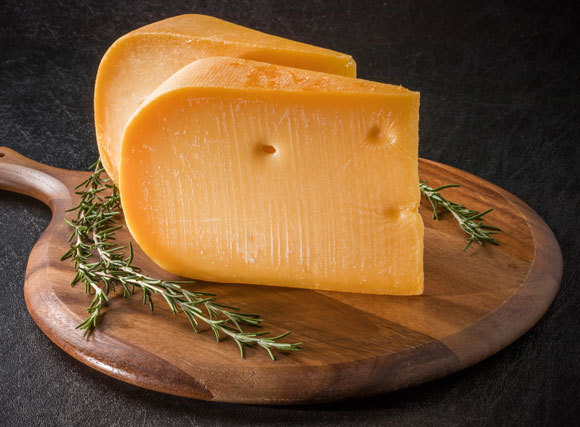 However, although the yellow color of many cheeses today results from the addition of food coloring, there are some exceptions to the rule. One of them is the original Parmesan cheese, also known as “Parmigiano-Reggiano”, after the name of the region in Italy where it is produced. In order for this cheese to be called Parmigiano-Reggiano, there are, by law, several statutory guidelines for the production process.

Among other things, the law states that the cheese can contain only three ingredients: milk, salt and a specific enzyme that is added to the milk, thus it is forbidden to add food coloring to Parmesan cheese. The aging process must last at least 12 months, after which qualified quality assessors examine the color, taste and smell of the cheese. Parmigiano-Reggiano cheese must be straw yellow in color; unless it has the right color it cannot be thus named. It is yellow despite the lack of food coloring, due to the beta carotene that reaches the local cows’ milk through the grass they eat. In contrast to the English cheddar producers, Parmesan producers do not remove the fatty layer off the cows’ milk, thus it remains yellow even without the addition of food coloring. 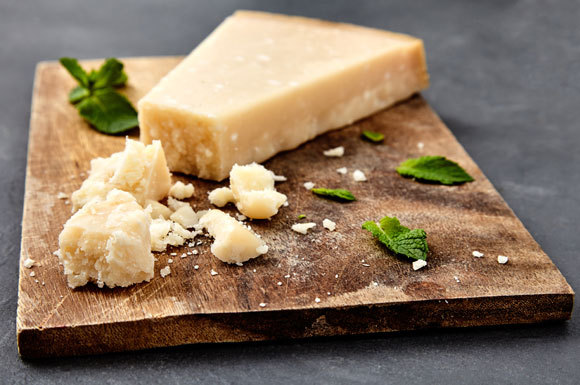 Naturally yellow, according to the law and the experts’ assessment. Parmesan cheese or Parmigiano-Reggiano | Photo: Olexiy Bayev, Shutterstock

Have you ever seen yellow goat’s cheese? Contrary to cows, whose milk is rich in beta-carotene, when goats graze grass the beta-carotene is broken down in their bodies into vitamin A. As  a result, goat’s milk contains no beta-carotene at all, and is white in color. Thus, all types of goat’s milk cheese are always white, even when the equivalent cheese produced from cow’s milk may display yellow shades originating from the cows’ diet.

In stark contrast to the white color of goat cheese, there are also some blue cheeses, such as Roquefort. The source of the blue-green color in this type of cheese is a certain mold that is added to the cheeses. The mold doesn’t just change the color of the cheese, but also breaks down the fats in the cheese to their building blocks - fatty acids - some of which have the unique flavors characteristic of blue cheeses, such as a flavor that imparts a sensation of spiciness. 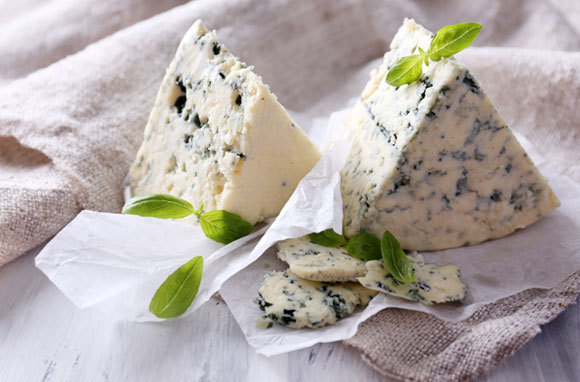 Colors originating not in the cheese, but in the mold added to it. Blue cheese | Photo: Africa Studio, Shutterstock

The Relationship between Color and Taste

As we learned at the beginning of this article, many yellow cheeses obtain their color from the addition of food coloring, which is meant to make people like the cheese more. Researchers from the Department of Nutrition, Dietetics, and Food Sciences at Utah State University, examined how the color of yellow cheeses affects clients’ perception of flavor. To this end, the researchers produced nine cheddar cheeses, with different amounts of annatto, a condiment which imparts an orange color, and titanium dioxide (E171), which imparts a white color.  A test they conducted with 120 participants, revealed that most cheese consumers were somewhere in the middle: an excessively strong color caused the experiment’s participants to like the cheese less, but an excessively pale color was not to their taste either. It seems that we like to - or at least are used to - eating our yellow cheese when it displays its familiar yellowish hue.