Making Food Out
Of Thin Air

Bacteria, lab cultures and solar energy utilization. In order to feed the ever-growing human population we must find new and more efficient food sources. Where should we look for them?

Nearly eight billion people live on Earth today, and this number is expected to reach ten billion by the year 2057. On the occasion of World Food Day, it is noteworthy to consider the sources of food available to our planet's ever-growing population. According to commonly accepted estimates, a little more than one half of the world's population are omnivorous (consume both plant-based and animal-based food), nearly forty percent eat mostly plant-based food but consume meat occasionally (what has become known as flexitarianism), while the remaining ten percent are strictly vegetarian or vegan. It is very difficult to estimate the exact numbers, and studies rely mainly on surveys and self-reports of participants. Either way, a large majority of the inhabitants of our planet consume meat, while raising livestock for meat comes at a price - four fifths of the world’s agricultural land today is being used for grazing and for growing food for the animals that we raise for meat. Additionally, the meat market is responsible for about one quarter of the annual greenhouse gas emissions and thus contributes greatly to the climate crisis.

Hence the question of how to feed so many people inevitably arises. Nearly half of the habitable land on Earth, that is, fertile soil that is not covered by glaciers or found in a desert area, is already being used today for food production. An additional one percent of the habitable area is being used for residential purposes. 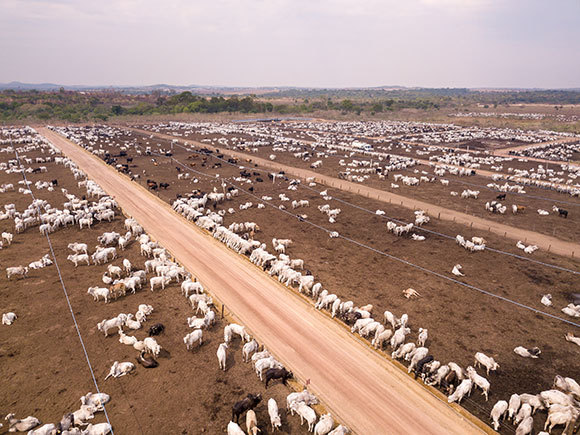 Humans domesticated wheat - the wild variety of the common modern grain, as early as 12 thousand years ago. This marked the beginning of the Neolithic Revolution (also known as the First Agricultural Revolution) in the Middle East, which constituted the critical transition of human cultures from a nomadic hunter-gatherer lifestyle to agricultural societies living in permanent settlements. Over the years we have domesticated many food crops, improved different strains and even genetically engineered plants to make them more palatable, to improve their domestication traits, as well as to make them more suitable for modern farming methods. Even today, new studies that are underway, are aimed at domesticating additional wild strains that will be suitable for our diet and needs.

The problem is that we do not have a limitless supply of land that could be use for food cultivation, not to mention that taking over new land for agricultural purposes involves the destruction of existing ecosystems. In order to continue to feed the world’s population, what we have done thus far is not enough. Hence, in recent years, efforts have been made to produce new types of food, using newer and more efficient methods. An example of such an attempt is the production of plant based meat substitutes that will allow to reduce the amount of livestock grown for food and the emission of greenhouse gases that accompanies their breeding. 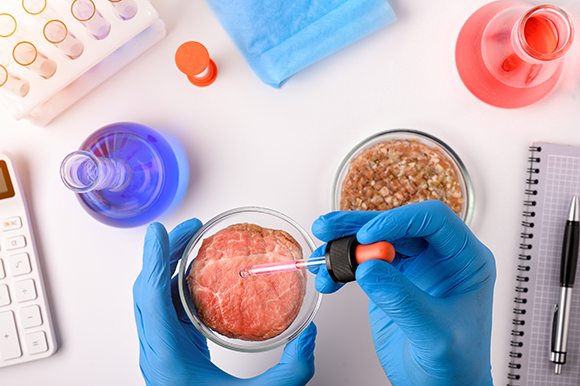 Use of cultures or of 3D tissue printing: laboratory-produced meat | Image: Axtem, SHutterstock

Another way to streamline food production is to grow meat artificially in cell cultures in a laboratory - a challenging task, undertaken currently by several companies around the world. In order to achieve this, a sample of cells taken from a live cow is grown in culture under controlled conditions and driven to produce new edible tissue - a kind of an artificial steak. In order to obtain the desired texture and flavor, some companies growing cultured meat use supplements, such as hemoglobin, which endows red blood cells with their color and enables them to transport oxygen. Other companies utilize 3D printers that use fat and muscle cells as raw material to build tissues with structure and texture that resemble a steak or a hamburger. 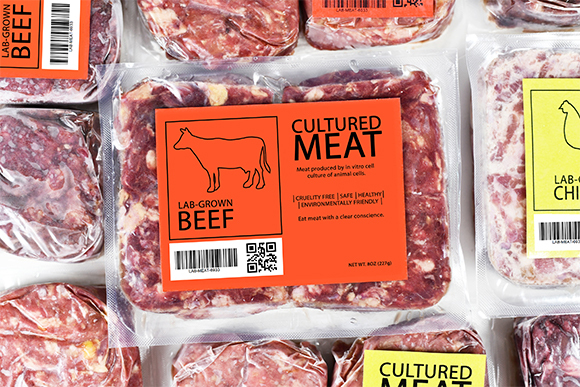 The day is near when this is what the meat department in the supermarket will look like: packages of laboratory grown cultured-meat | Image: Firn, Shutterstock

Another alternative to produce substitute food is based on bacteria and yeast. The concept itself is not new, as we have been using microorganisms for thousands of years to drive the fermentation processes necessary for the production of beer, bread, pickled vegetables, wine, yogurt and cheese. The current innovation is to grow bacteria and yeast in large fermentation tanks and to use their products as feed for livestock or as protein-rich food supplements for humans.

The source of this protein is called Single-Cell Protein (SCP). Its cultivation requires less water than agricultural plant crops, takes up less space and an additional advantage is that microorganisms utilize nitrogen more efficiently than plants do. Currently some companies already produce single-cell protein in fungi, bacteria and algae, as food for livestock or for human consumption. However, the current methods still use plant-based ingredients. New studies are aimed at removing even this small amount of raw material, and finding a way to feed bacteria “from thin air”, without spending valuable land space in order to grow a vegetative mass for the production of single-cell proteins.

Sun and solar panels can be used to generate the electricity required to run the devices and to power the chemical processes that enable production of simple carbon compounds, such as methanol - a type of alcohol - out of the carbon dioxide found in the air and water. These compounds nourish the unicellular organisms and allow them to reproduce. Finally the bacteria are dried and used as feed for livestock or processed to preserve the dry protein only, to be used as a food supplement for humans.

This process requires the filtering out of nucleic acids, fats and sugars from the final product. It is highly important to remove the nucleic acids, since one of their degradation products in the body is Uric Acid, a difficult-to -break-down substance that can cause Gout - a form of inflammatory arthritis - when present at high concentrations. The cellular protein itself constitutes 55-75 percent of the total dry mass. In addition to protein, the biomass is also rich in minerals, such as iron, zinc, calcium, phosphorus, sodium and magnesium.

The Finnish company Solar Foods is already producing “food out of thin air” using this method. Their single-cell protein is called Solein. The company's representatives claim that the protein powder is tasteless and therefore can be added to different foods and enrich them without affecting their flavor. It contains 65 percent protein, 20-25 percent sugars and 5-10 percent fatty acids. 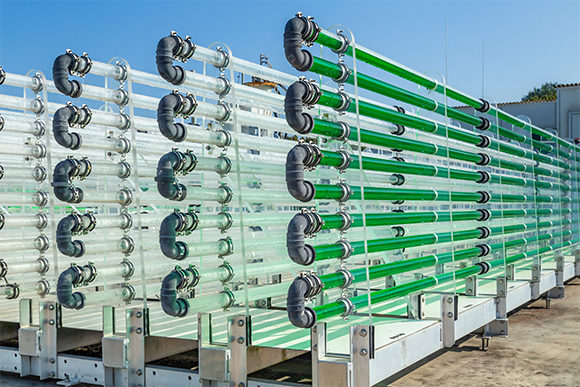 Using solar energy and saving space and water. An algae cultivation facility in the Netherlands, used for the extraction of protein, fat and fuel | Image: INTREEGUE Photography, Shutterstock

In spite of the many efforts invested in developing new food sources, no quantitative comparison has been made so far between traditional agriculture and the systems that aspire to overtake its place, or at least to complement it. Recently, a group of researchers from the Max Planck Institute, the University of Naples and the Weizmann Institute of Science, calculated the profitability of the production process of single-cell protein compared to conventional agriculture, in terms of energy consumption, financial cost and nutritional gain.

Their calculations addressed single-cell protein from a bacterial source, since bacteria are capable of consuming a wide variety of carbonaceous molecules, such as methanol or formic acid, and use them to divide and reproduce. Additionally, bacteria are capable of producing larger amounts of proteins relative to their mass compared to algae and yeast.

The researchers calculated the energetic efficiency of each stage in the process, starting with the generation of electricity out of solar energy, alongside capturing carbon monoxide from the atmosphere and fixing it by chemical processes, through the production of additional nutrients required for the bacteria, the cooling and stirring of the growth tanks, to the stage of  processing the bacteria into feed for livestock or into protein for human consumption. Finally, they calculated the efficiency of the entire process. To achieve this they used real-life data - for example, the theoretical efficiency of solar panels is about twenty percent, but in practice it is merely 4.1-5.6 percent.

It was found that under ideal conditions, production of SCP using solar energy yields four times more calories than sugar beet, when producing feed for livestock, and twice as much as sugar beet, following the additional processing necessary for making it suitable for human consumption. The protein yield is even greater: cultivating bacteria for the production of SCP can yield ten times more protein per square meter per year than soybeans. 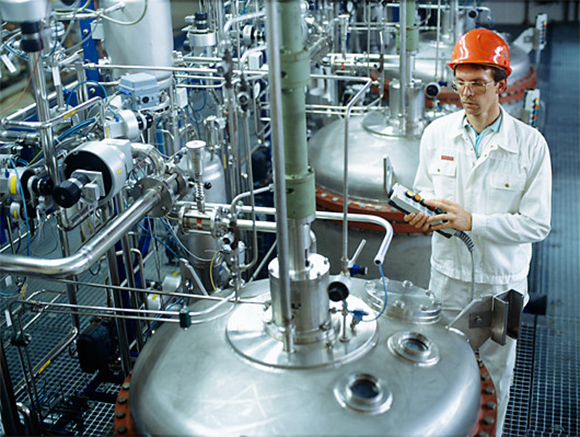 Higher efficiency. Containers used for the cultivation of microorganisms for the production of proteins and other substances in a factory in Germany | Image: MAXIMILIAN STOCK LTD / SCIENCE PHOTO LIBRARY

Where does this difference stem from? First, protein constitutes a larger fraction of the bacterial biomass than that of soybeans. Second, a larger fraction of it is edible - 55-75 percent of the biomass is protein, while edible soybeans are just over a third of the mass of the whole plant.

Moreover, when calculated annually, the combination of solar panels and electrochemical processes converts solar energy to chemical energy more efficiently than the process of photosynthesis in plants. Additionally, many of the agricultural crops are seasonal, while bacterial biomass can be cultivated all year round. Finally, microorganisms utilize water and nitrogen sources more efficiently than agricultural crops do. For example, water consumption of plants per unit weight is one hundred times grater than that of bacteria that produce single-cell protein. In animals the consumption is much higher - ten thousand times that of bacteria.

When these differences are translated into numbers we find that while a 2.5 acre soybean field can feed forty people for a year, we could feed 520 people for a year - 13 times as much - if that same space is used to place solar panels and cultivate bacteria for SCP.

Thus, the cultivation of bacterial biomass rich in proteins and additional nutrients has the potential to bring about the next leap in the ability to produce the food needed for humanity. It can be an efficient method with a better ecological footprint than conventional agriculture. In addition, for these purposes it is possible to use land areas that are not suitable for ordinary agriculture, such as deserts to rooftops. 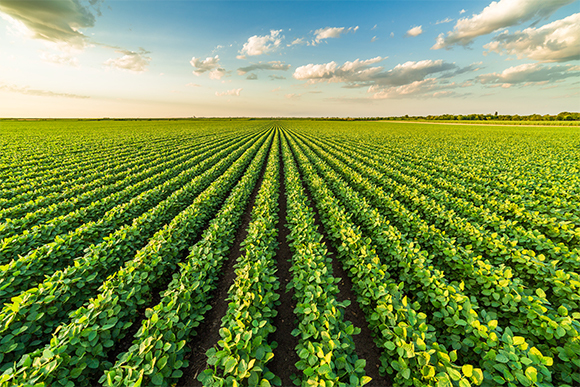 Cultivation of bacteria enables usage of the same area for the production of at least 13 times as much protein. A large soybean field | Image: oticki, Shutterstock

Alternative foods will gain momentum in upcoming years and will find their way to restaurants as well as to our refrigerators. Researchers constantly search for new ways to improve their production, for example by the search for or the development of bacteria capable of producing exceptionally large amounts of protein, by the improvement of the production and extraction processes of single-cell proteins, and even by incorporating such proteins into the production of laboratory-cultivated meat.

On other fronts, researchers are constantly looking for improvements in artificial photosynthesis technologies. Among other things, researchers are testing ways to directly convert solar energy into chemical energy, in contrast to the two-step process in use today. Such improvements, alongside rising prices of animal-based and even plant-based foods, may turn alternative foods into a more significant component of our diet in the foreseeable future.