Bad news for the fight against global warming: The quantity of methane produced by human activity has reached record highs

Human-caused methane emissions worldwide have hit an all-time peak. This conclusion emerges from a study examining greenhouse gas sources and sinks. The study found that in 2017, 596,000 tons of methane were emitted into the atmosphere—50,000 tons more than the average annual emissions in 2000–2006. The findings attributed the surge to human activities, primarily agriculture, waste, and the use of fossil fuels, while methane emission from natural sources remained unchanged. Methane concentrations in the atmosphere today are two-and-a-half times the pre-industrial levels, according to the measurements taken in glacial gas bubbles.

Even though methane’s atmospheric concentration is 200 times lower than that of carbon dioxide, its effect as a greenhouse gas is no less significant, because of its high radiation absorption. As a greenhouse gas, one ton of methane is equivalent to 86 tons of carbon dioxide, when their effects are examined over a 20-year period. In the past decades, a continuous increase has been measured in methane emissions and in its atmospheric concentration, and in terms of its contribution to global warming , today methane is second only to carbon dioxide.

To develop an effective plan of action to address climate change, we must understand and quantify the global methane budget. And that is no simple task; it is very difficult to calculate the rise in methane concentrations in the atmosphere because of the wide variety of emission sources and their geographic overlap. Another difficulty stems from the considerable variability in the natural processes which remove methane from the atmosphere, such as its reaction with free radicals in the air. 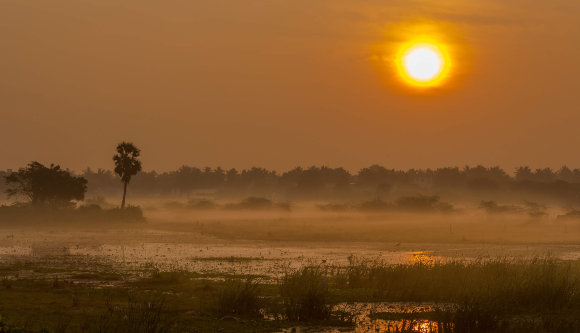 Swamp areas are the principal source for methane emissions, but no change has been recorded in natural emissions. Sunrise over a swamp | Photograph: Srinivasan.Clicks, Shutterstock

A Detailed Picture of Methane Emissions

To deal with those challenges, 90 scientists from a variety of research fields collaborate under the umbrella of the Global Carbon Project. By developing new computation models, collecting atmospheric measurements, and calculating the scope of inland methane reservoirs, they have succeeded to produce a detailed picture of the natural and anthropogenic contributions of different emission sources, and of the changes in emission levels of both during the 2008–2017 decade.

The research shows that factors linked to human activities are fully responsible for the increase in methane emissions in 2017, as compared with annual emissions during the previous decade, specifically cattle farming, waste accumulation, and natural gas production. There are currently 3.5 billion cattle and other livestock in the world, all emitting methane as part of the fermentation processes in their enteric systems. They are responsible for about one-fifth of today’s level of methane emissions globally. The bulk of cattle methane emissions occurs in southern Asia, South America, and Africa. Europe is the single continent in which a drop in the emissions has been recorded, due probably to the lower numbers of cattle raised by farmers there, as well as the implementation of advanced waste management policies.

Even though human activity is the main source of emissions, most of the global methane emissions originate in the natural environment. The chief sources are swamp areas, where oxygen-poor soils serve as the breeding grounds for microorganisms feeding on organic matter and employing a fermentation process that emits methane in a manner similar to the process in bovine stomachs. Apart from the swamps, large amounts of methane are emitted by geological activities, such as mud volcanoes, in which water at very high temperatures burst out of the subterranean depths. However, in contrast with sources of emissions linked to human activities, the scale of methane emissions from natural sources has not changed over recent decades.

The rate of methane emissions into the atmosphere, from both natural and anthropogenic sources, is approaching the values at the basis of the most extreme global warming scenario, according to the Intergovernmental Panel on Climate Change (IPCC). This scenario refers to a possible “business as usual” outcome, whereby humanity introduces no measures to curb greenhouse gas emissions, which will continue to accumulate in the atmosphere during the 21st century. According to that scenario, average global temperatures will rise by 4.3 degrees Celsius by 2100.

According to UN estimates, by 2050, the world’s population will grow by another two billion people, who are expected to further increase global meat consumption and the amount of buried waste each year. To some extent, the intense focus on carbon dioxide over the past few years has pushed aside the discussion of methane as a greenhouse gas. But without steps to limit methane emissions as well, the benefit from a reduction in burning fossil fuels in order to reduce carbon dioxide emissions will only be partial.