Marking World MS day this week, what do we know about the terrible disease? How can it be managed and is there a possibility of developing a vaccine against it?

Each day, our immune system successfully fends off infections that threaten our body and deals with cells whose activity has become abnormal. The immune system’s activity is usually very beneficial, but for some people, it sometimes mistakenly identifies healthy normal cells as foreign bodies.

In such cases, the mechanisms normally employed to fight off harmful elements are turned against the person’s own body and cause a lot of damage. Such a condition is termed an “autoimmune disease”.

Myelin enables fast relay of electrical signals in and between nerve cells, including instructions for muscle contraction or relaxation transmitted from the brain. Therefore, when the myelin layer is damaged, significant disruptions occur in the transmission of signals between the brain and the body. Multiple sclerosis patients may therefore experience difficulties in moving their body muscles, their cognitive abilities, and their sensory functions. In locations  where the myelin is damaged a stiff scar tissue is formed, in a process called sclerosis. 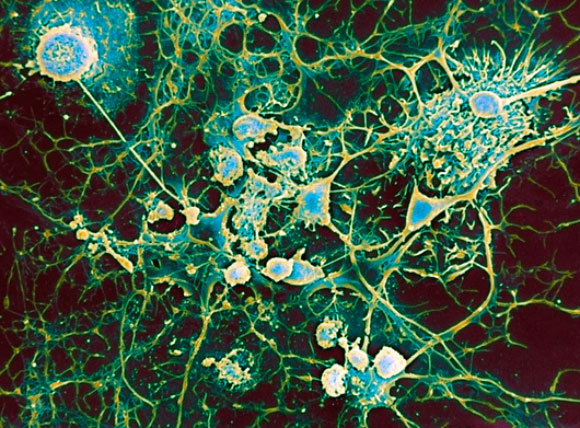 Despite its name, Multiple Sclerosis is not a particularly common disease. Its global incidence rate is about 36 cases per one hundred thousand people (about 0.04 percent). The word “multiple” does not refer to its prevalence, but rather to the multiple sclerotic white matter scars that develop throughout the central nervous system in the brain and spinal cord.

The age at onset of disease is mostly in the 20–40 years-old age group, and it occurs in women twice as much as it does in men. In addition, the existence of a relative diagnosed with MS increases the probability of developing MS. Apart from the genetic predisposition, environmental factors may also encourage disease outbreak, the main factor being infection with the Epstein-Barr Virus (EBV).

The disease has various symptoms, including difficulty controlling limbs, weakness and changes in sensation such as tingling or numbness, difficulty of speech and occasionally even eyesight impairment. The severity and type of symptoms vary from person to person and depend on the extent of nerve damage inflicted to the nervous system. In some cases, patients’ condition deteriorates to the point of disability and difficulties in carrying out daily tasks.

Today, four main types of MS have been classified. Eighty-five percent (85%) of patients suffer from relapsing-remitting MS (RRMS). This is the most common type, and it is characterized by attacks in which one or more of the symptoms intensify for a while, and then subside or disappear. Some of the patients with this type of MS will go on to develop secondary progressive MS (SPMS) – a disease characterized by a constant worsening of symptoms from one attack episode to the next. In some cases, medications can stop the deterioration from the relapsing-remitting disease to a progressive disease.

About ten percent of patients suffer from primary progressive MS (PPMS). The condition of patients with this type of MS gradually deteriorates beginning at the moment of onset, with no periods of remission following attacks. And finally, less than five percent of patients suffer from the rarest and most severe form of the disease: progressive-relapsing MS (PRMS). Patients with this type of MS experience continual worsening of their symptoms, in addition to repeated attacks. 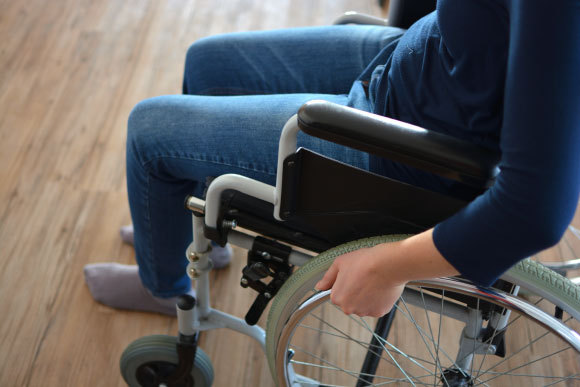 The disease onset age is usually in the 20-40 year old group, women are twice as likely to have it compared to men. A woman in a wheelchair | Illustration photo: tobe24, Shutterstock

Multiple sclerosis has been around for many years, but it has not always been possible to identify, let alone treat. The first documented patient was probably St. Lidwina from Holland, a Dutch nun who fell while ice-skating, in her youth, and whose condition has continued to deteriorate gradually up to the point of paralysis. Catholics Christians consider her a saint who protects ice-skaters. Her symptoms were documented in a biography written about her shortly after her death in 1433, but it is impossible to determine with certainty whether she was indeed suffering from multiple sclerosis.

Another famous patient was documented in 1822: Sir Augustus d'Esté, grandson of King George III of the United Kingdom, described the symptoms of his disease in his diary, which included visual loss, among other things.

In the beginning there was no treatment for multiple sclerosis, and patients’ symptoms gradually worsened. In 1868, French neurologist Jean-Martin Charcot first made the connection between his patients’ symptoms and a problem with the transmission of signals in the nervous system, becoming the first to define multiple sclerosis. He pointed to three common symptoms of the disease – tremor during movement, involuntary eye twitching and speech difficulties – and he also differentiated it from another neurodegenerative disease with similar symptoms, which would later be known as “Parkinson’s disease”.

Despite the extremely limited tools available to him at the time, some of Charcot’s conclusions remain valid to this day and are used for diagnosis of the disease. Diagnosis is mainly based on symptom description, a neurological examination and other auxiliary tests. The ability to diagnose has greatly improved since, thanks to the ability to perform magnetic resonance imaging (MRI) scans, a non-invasive tool that allows doctors to easily detect the characteristic scars in the nervous system.

In the past, the “hot bath test”, in which patients were immersed in a hot water bath and their reaction to the procedure was assessed, was also used for diagnosis. This method of diagnosis was based on the observation that the neurological symptoms of MS tend to worsen under the effect of heat. A number of years ago, researchers from Israel found a possible explanation for this phenomenon, showing that high temperatures and high salinity conditions can trigger pathological structural changes in the molecular structure of myelin. 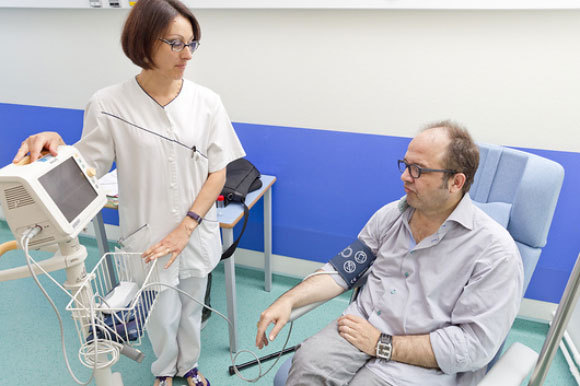 There is no cure for the disease as of yet, but diagnosis and treatment capabilities have greatly improved in recent years. Medical counseling of an MS patient | ASTIER / BSIP / SCIENCE PHOTO LIBRARY

Even today, multiple sclerosis is an incurable disease. The  current treatment focuses on slowing its rate of progress as well as on focused treatment on its symptoms and on measures to improve patients’ quality of life.

Severe attacks are usually treated with steroids, which quickly reduce symptom severity and accelerate the rate of recovery following the attack. The steroids suppress the immune system and reduce the inflammatory process caused by it in the affected area of the nerve. Up until the 1990s, this measure was the main tool used for relieving disease symptoms, but it had no effect on actual recovery following an attack or on the long-term progression of the disease.

It was later found that disease progression could be slowed down by the help of interferon beta. This is a protein naturally secreted in the body that helps to control the activity of the immune system. The mechanism by which interferon beta helps multiple sclerosis patients still remains unclear, but experiments have found that it decelerates its rate of progression, shortens attacks and reduces their frequency.

Another popular medication prescribed to MS patients is Copaxone, which was developed by immunologists Ruth Arnon and Michael Sela of the Weizmann Institute of Science. The medication is based on a compound of four amino acids that mimics the structure of myelin. Unlike interferon beta, Copaxone has no side effects that can damage liver activity. However, both Copaxone and Interferon beta are injectable drugs, which makes them more difficult for routine use. It is currently also possible to receive medications via a slow-drip IV, and treatments for MS that are given orally also exist today.

A large study published by researchers from Harvard University in early 2022 sheds light on the circumstances of disease development. The researchers used a database of medical information of U.S. military recruits, to monitor the health of about ten million veterans over a 20-year period. During this period, 955 of the study subjects were diagnosed with MS. A careful examination of the antibodies in their blood revealed a surprising but unequivocal finding: there is a clear connection between past infection with Epstein-Barr virus and development of MS later in life. In fact, this virus is probably the most significant factor contributing to disease onset, since the risk of developing MS increases 32-fold after infection with EBV.

Epstein-Barr virus, which is considered one of the leading causes of mononucleosis, is a very common virus. So much so, that more than 90 percent of the adult population has been exposed to it at some point in life. While most of those infected will not develop Multiple Sclerosis, it seems to play an important role in the process leading to disease development. This discovery greatly highlights the importance of the current efforts to develop an effective vaccine against EBV, which are currently focusing on the mRNA technology recently used in several vaccines against COVID-19. In fact, the pharmaceutical company Moderna has already begun the Phase I clinical trials of such an EBV vaccine.

Although, as already mentioned, there is of yet no real cure for Multiple Sclerosis, we are continually learning about the mechanisms of the disease and discovering more effective methods for treating and diagnosing it at the early stages. With the help of a balanced diet, medication and maintenance of mental resilience, many patients are able to improve their quality of life and carry out their daily routines. The discovery that the Epstein-Barr virus is likely to be one of the main causative factors for disease developments brings hope for the development of vaccines and other treatments for the prevention of MS, and for further progress in finding new and effective ways to cure the disease or improve life alongside it.