Wheat has justifiably earned a place of honor among the Seven Species of biblical fruits and grains. This important cereal comprises some 20% of global protein and caloric consumption and, alongside corn and rice, it is one of the three main cereals upon which present-day human diet is based. Therefore, knowing how to protect it from disease is of special significance.

During the agricultural revolution, about 10,000 years ago, mankind domesticated the "mother of wheat" – the wild wheat that grows in the Mediterranean region that gave rise to cultivated wheat species. The identity of the mother of wheat was a mystery for many years, until 1906, when Aaron Aaronsohn discovered it growing among the rocks near Rosh Pina.

Much more than an important trade product – at a $170-billion global market value – wheat is also vital for providing nutritional security to the world’s growing human population. Therefore, protecting crops from bacterial, viral, and fungal diseases is the top priority for farmers and researchers. An example for such a disease is yellow rust: A disease caused by a parasitic fungus that can harm some 88% of wheat species in the world.

Nearly 30 years ago, a wild wheat gene that grants resistance to yellow rust was discovered. Called Yr15, the gene was found by Israeli researchers Zeev Gerechter-Amitai and Adriana Grama from the Agricultural Research Organization’s Volcani Center. But beyond the discovery of the gene itself, its location in the wheat genome, DNA-base-pair sequence, and most importantly – its mechanism of action had to be found.

A Needle in a Haystack

Wheat has a huge genetic code, containing 16 billion base pairs – five times the size of the human genome; searching for the Yr15 gene inside the complex wheat genome is nearly an impossible task. Tzion Fahima from the Institute of Evolution at the University of Haifa and his colleagues; among them, Valentina Klymiuk, who led the study, took on the challenge.

Using genetic mapping tools, the researchers found the exact location of the gene and its composition. "We knew that there is a gene accounting for yellow rust resistance, but we did not know what protein it produces and what is its mechanism of action," Fahima and Klymiuk told Davidson Online. "Once we were able to isolate the specific base-pair sequence of the gene, we could transfer it to susceptible plants and grant them resistance to the disease. Before we discovered the identity of the gene, the only way to transfer it from the mother of wheat was to cross the two strains, and check whether the resistance gene was passed on using selection."

In order to prove that the gene that had found was indeed the yellow-rust resistance gene, the researchers used a chemical called EMS, which introduces DNA mutations. They treated 3,000 resistant wheat plants, causing ten of them to lose their resistance to the fungus following the treatment. Additional tests found that all mutations in these plants were in the gene Yr15. In addition, when the gene was inserted into non-resistant plants, they acquired resistance to the fungus – corroborating evidence showing this was indeed the gene they were searching for. 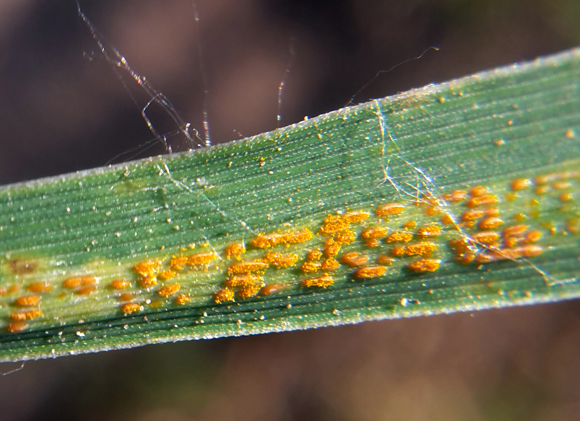 30 years had passed from the gene’s discovery to the identification of the mechanism underlying its protective properties in plants. Yellow rust fungus on wheat | Photograph: Shutterstock

A new kind of protein

Next, the researchers investigated the mechanism through which the gene grants wheat resistance to the disease. The results indicated that the Yr15 gene produces one of the plant's immune system proteins. The first step in activating the immune system is recognizing the disease-causing agent – the pathogen. Recognition is carried out by special receptors located either on the cell's surface or inside it. Most of these receptors recognize protein molecules called effectors, which are secreted by the pathogen in order to take over the plant cells and suppress their defense systems.

Most of these receptors belong to a family called Nucleotide-binding domain Leucine-rich Repeat-containing proteins (NLR). Recognizing the presence of the threat, these receptors activate dozens of other proteins that can produce anti-microbial molecules or activate programmed cell death in the infected cell. Therefore, infected cells die and stop the infection from spreading to other cells.

But the team’s research showed that the Yr15 protein is not a member of the NLR receptor family and employs a different mechanism to stop the invasion of the pathogen, also using programmed cell death. Thus, they had made a surprising discovery of a new protein family, which activates programmed cell death in a way different than previously known. They termed the new protein family Tandem Kinase-Pseudokinases (TKP).

The proteins of this family are composed of two subunits bound to form one protein, the first is called a kinase and the second – a pseudokinase. The researchers suggest a model, termed "the decoy model," according to which the pseudokinase acts as bait that binds the pathogen's effector molecules, which then activates the kinase molecule connected to it. In turn, the kinase activates other proteins that can induce cell death.

It is still unclear whether the new protein family causes the same response in all types of plants. Next, the researchers want to check if other cellular programs are activated or whether the response changes according to the type of threat recognized by these proteins.

Beyond the great potential of using Yr15 to protect wheat crops, the discovery also sheds light on the evolution of the TKP protein family. As it turns out, similar proteins also exist in humans (e.g., the protein JAK3 that is also a part of the immune system and sometimes leads to programmed cell death), as well as in other plant species. "Discovering this new family of proteins indicates a convergent evolutionary process, which is the independent evolution of similar molecular mechanisms within organisms from completely different kingdoms," says Fahima.

In the future, the researchers hope to discover the identity of the effector molecules recognized by Yr15, as well as the additional proteins it activates in order to induce cell death. Klymiuk also aspires to search for similar proteins in other plants and concludes, "To date, we have looked for the presence of the Yr15 gene in 11 plant species other than wheat, and we would like to expand our search to over a hundred additional plants whose genomes have been sequenced."