Brain With a Side
of Alcohol

Whether one or five drinks - how does alcohol affect our brain’s structure and function?

At the age of 18, a person in the US reaches the age of majority and is legally considered an adult, while at age 21 a person reaches legal drinking age, acquiring the privilege to purchase and consume alcohol as much as one sees fit. Whether it is in a glass of beer or a cup of wine, or even in a fine glass of whisky - how does alcohol affect us?

The alcohol we drink is absorbed from the stomach into the bloodstream and is degraded by the liver. Therefore, excessive alcohol consumption can significantly damage the liver, but this is a slow process that can take years. Naturally, alcohol also has more immediate effects. On a night of heavy drinking the liver is unable to quickly degrade all of the alcohol we consume. Therefore, large quantities of acohol reach other tissues and organs in our body and have diverse effects on our body’s general function, and particularly on our thinking and our perception.

The alcohol content in our blood is represented by units of BAC (Blood Alcohol Content), measured in grams (g) of alcohol per 100 milliliters (ml) of blood. Each blood alcohol level has characteristic symptoms: at 0.03-0.12 BAC we are slightly euphoric, relaxed and “tipsy”; at 0.18-0.3 BAC our motor abilities and coordination become impaired and we may even experience blackouts and short-term memory loss. At a BAC of 0.25 we will start experiencing symptoms of alcohol poisoning, and further drinking, which would bring our blood alcohol level to 0.45 BAC, could be fatal.  A BAC calculator, which takes into account the volume and type of beverage, the body weight, and the time that has elapsed since the time of drinking, is available here. 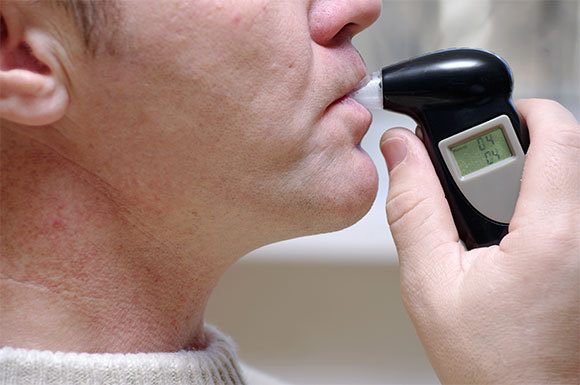 Our blood alcohol content is measured in units of BAC, which represent the percentage of alcohol in our blood. Measuring body alcohol content while exhaling | Shutterstock, papa1266

When Alcohol Goes to Your Head

A significant part of both the more and the less desirable effects of alcohol result from its influence on our brain. The euphoric feeling that comes along with drinking is induced by increased secretion of the neurotransmitter dopamine in our brain. Another neurotransmitter affected by alcohol is GABA, which suppresses signal transduction between neurons in our brain. Alcohol mimics the activity of GABA in the brain, and thus leads to reduction of anxiety. In the long term, however, It could have the opposite effect and lead to desensitization (loss of sensitivity) and suppression of the ability of GABA receptors to sense the neurotransmitter and respond to it. Thus, in a state of prolonged alcohol use, the brain is in a constant state of anxiety, irritation and and agitation.

In the short term, our motor functions are impaired by the effect of alcohol on a structure in our brain called the cerebellum, and our decision making abilities are impaired by the effect of alcohol on the prefrontal cortex, which is important for our cognitive function. In the case of alcohol-associated blackout, memory loss results from the effect of alcohol on the activity of the hippocampus, a brain structure that is vital for the formation of new memories. Finally, alcohol consumption leads to frequent visits to the bathroom, which also result from the imbalance excerpted by alcohol on the brain. The ADH hormone, which is secreted from the pituitary gland, is transported by the bloodstream to the kidneys where it is in responsible for reducing the volume of urine. Since alcohol slows down ADH secretion, its blood levels decrease and the volume of urine increases. 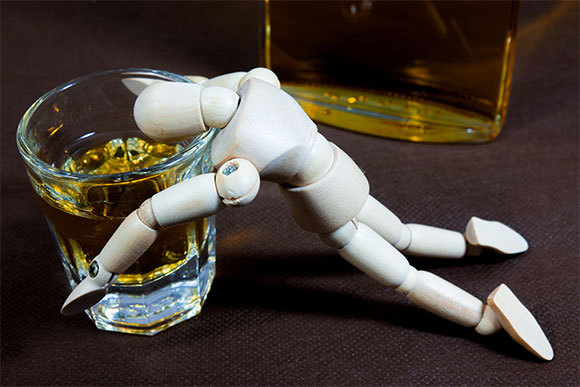 Our motor skills are impaired by the effect of alcohol on a structure in our brain called the cerebellum. A wooden figure of a man leaning on a glass of whisky | Shutterstock, shutter_tonko

While some of the effects of alcohol are transient and eventually pass, regular and prolonged alcohol consumption can lead to permanent changes, and can affect the structure and function of the brain in the long term, even if consumption is moderate.

Excessive alcohol consumption in a short period of time, or heavy episodic drinking, is termed binge drinking, and it is defined as the consumption of five or more standard drinks over a one day period. It has been found that such excessive alcohol consumption over time is associated with the shrinking of various parts of the brain. Most of the shrinkage is due to a reduction in the tissue termed “white matter”, which consists mainly of the extensions that connect the nerve cells (neurons) within the brain. These extensions, termed axons, are coated with a fatty white substance called myelin. Does this crucial tissue recover after a period of alcohol avoidance? While this may be possible, the evidence for it is not strong. In addition, it was also found that excessive alcohol consumption leads to a decrease in the volume of brain gray matter, which contains the neurons themselves. This decrease could cause neurocognitive impairments, implying impairment of mental function. People who consume alcohol excessively can also suffer from Wernicke–Korsakoff syndrome, a degenerative brain disorder involving memory disruption. This syndrome is caused by the thiamine (vitamine B1) deficiency, that results from alcohol-inflicted damage to the cells that line the digestive system, which impairs their ability to absorb vitamins and transfer them to the bloodstream.

Consumption of alcohol during pregnancy carries a high risk for the fetus; Even moderate consumption of alcohol can cause fetal brain damage. The alcohol in the mother’s bloodstream crosses the placenta and reaches the blood of the fetus in her womb. The fetal liver is not yet developed enough to process the alcohol, as an adult liver would, and thus the developing baby may suffer from disorders that will accompany it for the rest of its life. While the risk increases with the amount of alcohol consumed, it is recommended to avoid alcohol consumption entirely during pregnancy. 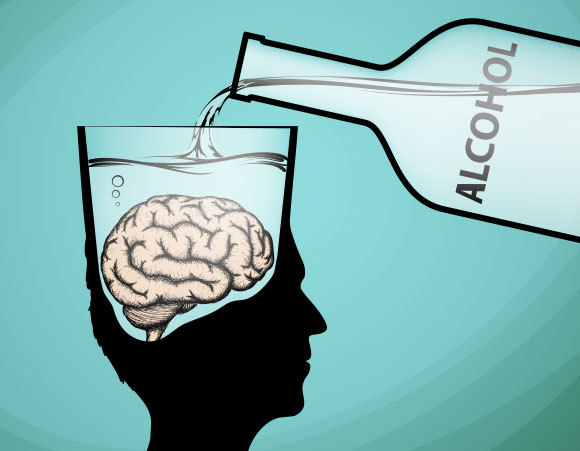 Prolonged and excessive alcohol consumption is associated with the shrinking of parts of the brain. A drawing of alcohol being poured into a human brain | Shutterstock, TrifonenkoIvan

Given the documented effects of alcohol on brain structure, it is reasonable to assume that excessive alcohol consumption at a young age would be even more dangerous than its consumption at a later age. During puberty our brain develops and undergoes substantial changes. The connections between neurons undergo careful editing, and only the important ones remain and are reinforced. Numerous studies that have followed brain development in adolescent teenagers, demonstrated that excessive alcohol consumption damages brain formation, and that the brains of teens who consumed large amounts of alcohol differ significantly from those of their age-level peers.

For example, researchers have demonstrated a link between alcohol consumption and impaired development of brain white matter as well as a decrease in gray matter volume in multiple key regions of the cerebral cortex and of the hippocampus. One study found a lower cerebellar volume in adolescents who consumed alcohol excessively, relative to the cerebellar volume of their peers. Other studies also reported a reduction in the volume of the corpus callosum, an important structure that connects the two cerebral hemispheres and enables the coordination of their activities.

Apart from its impact on the structure of the brain, alcohol also appears to affect its function. Studies that examined brain activity in teenagers using fMRI scanning, have found that when they performed a task that required the use of working memory, brain activity in alcohol consuming teenagers was different from that of their peers. However, no significant difference in performance levels was observed between the two groups. 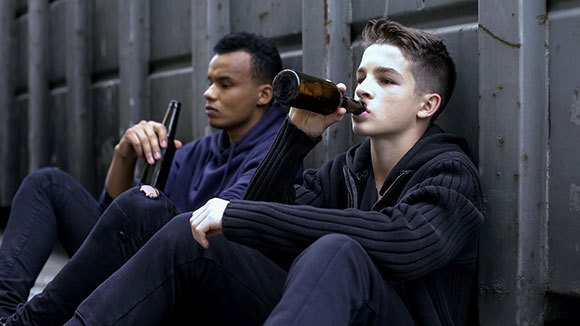 A Night of Drinking

Does alcohol cause long-term damage only if consumed in large quantities over a long time period? It is difficult to answer this question without conducting an experiment, and naturally, such an experiment is morally problematic. Nonetheless, in a recently published study  researchers were able to find circumstances that would allow them to address this question without having to perform an actual experiment. The study, which was conducted in the United States, examined the brains of subjects before and after they reached 21 years of age. As already mentioned, 21 is the legal drinking age in the US - the age at which alcohol purchase and consumption become legal - and it is customary among young people reaching this age to throw a large party to mark the long awaited status. These parties usually involve large amounts of alcoholic beverages, and in many cases lead to binge drinking, which results in dangerous BAC levels. The researchers took advantage of this practice to test the specific effect of a single massive alcohol consumption event on brain formation, and the findings published by them are not at all reassuring. A decrease in the volume of the corpus callosum was observed  following alcohol consumption during the twenty-first birthday celebration, with a positive correlation between the extent of volume decrease and the amount of alcohol consumed. This implies that the more alcohol the celebrant consumed, the more severe was the decrease in corpus callosum volume.  The study participants were re-examined five weeks later, and no improvement (i.e. recovery) was observed in the volume of their corpus callosum during this time.  Although this was a small study, of only 50 subjects, it suggests that even single-time binge drinking, has a real and damaging effect on our brain 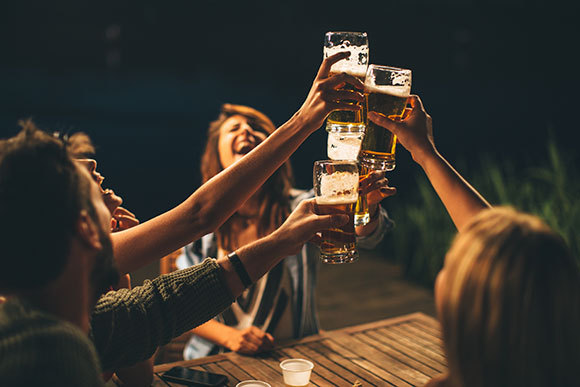 Research suggests that binge drinking, even if occurring only once, has real and harmful effects on our brains. Young people drinking beer at a party | Shutterstock, djile

Alcohol is a popular drug and its use is socially acceptable, but excessive drinking is dangerous for those who consume it as well as those around them. Beyond the documented dangerous effects it excerts on brain formation and function, alcohol consumption also has substantial behavioral influences that can often result in dangerous behavior. A clear example of this is drunk driving, which greatly increases the risk of car accidents. Alcohol addiction is also dangerous, and in extreme cases alcohol withdrawal is difficult and has physical and mental repercussions. It now appears that even a single episode of extreme drinking can affect brain structure, and we need to be aware of that and drink moderately and responsibly.