Purple Rain in a Jar

If all the seas and oceans in the world were full of grape juice - would it rain grape juice?

In this experiment, we’ll create rain inside a jar, and we’ll see if grape juice makes grape rain. This experiment requires adult supervision.

● Grape juice (or raspberry syrup, if you’re in Israel)

Watch how the experiment is conducted in this video:

Here’s an interesting question: Let’s assume the oceans’ waters are full of lemonade, or grape juice - would it rain juice? In the video experiment, we answered the question by simulating this process. Instead of an ocean filled with juice, we used a jar; instead of the sun heating the water and evaporating it, we used hot water; and instead of the cold air that condenses the water vapor back into liquid, we used an ice-chilled bowl. Within a minute, it started to “rain” juice in our jar! Since we used a small jar, it wasn’t exactly “torrential” rain, but about a drop every 20 seconds.

As we can see in the video and in the picture at the top of the page – the drops of rain that formed from the juice inside the jar are clear, and not the color of the juice.

If you conduct the experiment and taste the drops, you’ll find that they don’t have the taste or sweetness of the juice. This means that during the process, the water underwent some sort of “cleansing” or “purification” – they were cleansed of the grape juice and rained as clean water. So here is the answer to our question: If the oceans were full of juice, it would not rain juice, just regular rain.

As part of the water cycle, water changes its state of matter: Liquid water evaporates and turns into gas, later on cooling and turning back into drops (condensation). Sometimes it cools even further, freezing and turning into ice that falls down as hail or snow, and defrosting back into liquid water when hitting the ground.

This process, evaporation of liquid into gas and back into liquid, is called “distillation”. Distillation is a very widespread process in laboratories and industry used to separate and clean materials. The cleansing / purifying / separation happens due to the fact that not all the materials evaporate (and condense) the same way or at the same temperature.

Water starts evaporating at 20 degrees Celsius (68 degrees Fahrenheit). That’s why a wet shirt that just came out of the washing machine will dry on a rope, and why a wet floor dries over time. But sugar and salt don’t evaporate at that temperature. If we put a glass with salt water in the sun and wait for the water to evaporate, we’ll eventually see salt remaining at the bottom of the glass. This means that only the water evaporates and the salt remains. The salt water is separated into water (which is removed as vapor) and salt. And that’s exactly what happens in nature - the sea is salty, but only the water evaporates, so rain is not salty. And that’s a good thing, because that way, we have a natural source that supplies us with drinking water all year round: The rain, no matter how much our water sources are “dirty” or unsuitable for drinking.

During the distillation process in research laboratories and the industry, the heat source is not the sun, and there’s no need to wait for slow evaporation. To save time, heat is created using strong ovens and furnaces that heat the materials up to their “boiling point,” when they bubble and froth (the boiling point for water is 1000C / 2120F). During evaporation, which starts at temperatures below the boiling point, liquid becomes gas only at its upper layers. But during boiling, the whole volume of the material turns into gas, and causes bubbling, which is vapor produced inside the liquid. 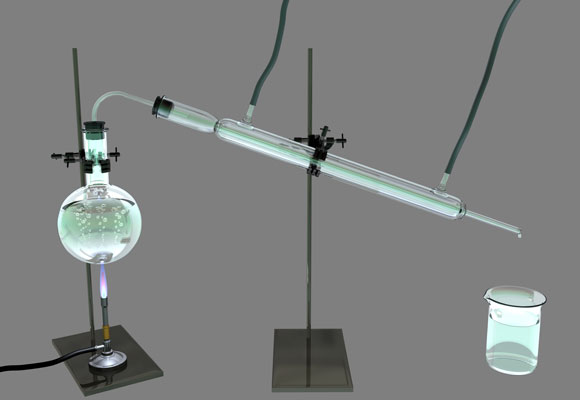 Water vapor from the bottle condenses in the cool cell, and the distilled water drips into the cup on the right. A simple device for distilling water. Photo: Shutterstock

Distilled water is water that has gone through distillation, i.e., evaporation followed by condensation, and is very pure and clean. 100% water. You can buy distilled water in special shops or make it in a lab. Rainwater is in fact distilled water. But in reality, rainfall is often mixed with dust, dirt, sea spray, gases from factories and other materials that dissolve into it, so there is a difference between pure distilled water and rain, but rain is still pretty close to distilled water. In places where it rains a lot, like in the jungles near the equator, the plants have difficulty getting the necessary minerals they need for life because most of the water is mineral free.

If you taste distilled water, you might say it’s a bit sweet – but this is where your sense of taste is misleading. There is no sugar in it. We’re just used to drinking water with minerals, which make it taste slightly salty, so when our mouths taste distilled water they seem “sweet” in comparison to the water we’ve been used to drinking all our lives.