Debunking the Outlandish Claim Against the COVID-19 Vaccines

Despite claims by supposedly reliable sources, there is no evidence that COVID-19 vaccines cause infertility. Nor does the coronavirus itself.

At the beginning of December 2020, a former Pfizer executive and a German physician put forward a claim that could be construed as if the Pfizer vaccine developed against the novel coronavirus (SARS-Cov-2) could lead to infertility in women. At first glance, the claim may sound convincing, as it relates to the protein structure of the virus, however, it lacks any scientific foundation. A careful examination reveals that COVID-19 vaccines, as well as the coronavirus itself, do not adversely affect fertility.

The claim is based on superficial resemblance between the spike protein of the coronavirus, the primary target of the vaccines, to a protein found on the perimeter of placental cells. In order to understand the claim and its flaws, we need to first understand the kernel of truth it is based on, and in this case - we need to understand what this protein is and how our immune system recognizes foreign pathogens.

During fetal development, a temporary organ called the placenta forms around human fetuses. The placenta has two functions - it leads nutrients from the mother to the fetus and it isolates them from each other. This isolation is possible due to several factors, among which is the structure of the outermost layer of the placenta, called the syncytiotrophoblast.

Unlike most of the tissues in the body, the syncytiotrophoblast is not made from multiple cells separated from each other, but rather as one cell with multiple nuclei. Such a structure is called syncytium and it can be found in several other tissues in the body, such as muscles. As the cells are joined together, there is no space between them and so the placenta is sealed off from the surrounding uterine environment.

One of the proteins involved in the creation of this protection layer is syncytin-1. This protein oversees the fusion of cells required for the creation of the syncytium layer encapsulating the placenta. Without it, the integrity of the placenta will be harmed, and the life of the fetus would be in danger. Moreover, as this is the most external layer of the placenta, it has direct contact with the immune system of the mother. We know of certain autoimmune diseases where the immune system of the mother attacks the syncytium, which could lead to fetal death.

#1 Reason to Keep Calm: The Immune Response to the Virus Does Not Affect the Placenta

Based on the information above, it would be plausible to think that the immune response of the body against the coronavirus or the vaccine could lead to damage of similar proteins, such as syncytin-1. In reality, however, the risk is nonexistent due to several reasons, some involving the characteristics of the virus and some involving the way our immune system operates.

The body’s immune response against the wild coronavirus is much stronger than the body’s response to an artificial vaccine. Therefore, if the creation of antibodies to the coronavirus would have harmed female fertility, we would have expected to see this phenomenon initially among women who are sick or recovered from the COVID-19. Despite our expectations, and despite millions of diagnosed patients worldwide and extensive research regarding the symptoms of the disease, there is currently no evidence that being a COVID-19 infection leads to an increase in abortion rates or causes any placental damage. 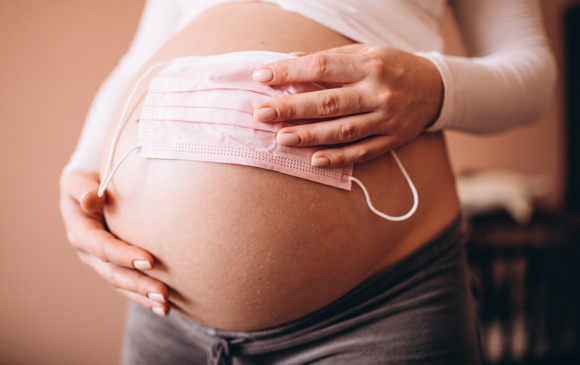 Coronavirus vaccines are safe, and do not harm the placenta. A pregnant woman holding a mask | Photography: PH888, Shutterstock

#2 Reason to Keep Calm: The Immune Response Does Not Harm the Placenta Directly

What about the possibility that the cells of the immune system would get confused and attack the placenta and developing fetus? Here we must remember that the immune system knows how to distinguish between the cells of our body and outside invaders very well. At the event of a new threat, the adaptive immune system comes to our aid, especially white blood cells called B and T Cells, that can recognize threats and create long-lasting immunological memories against them. This ability is based on designated receptors found on the surfaces of the immune system cells, which allow them to recognize specific components in the proteins of the pathogen.

Like all proteins, the coronavirus proteins are made from chains of amino acids, the basic building blocks of all proteins. Based on the fact that the spike protein of the coronavirus and human syncytin share small fragments of identical amino acid sequences, it has been claimed that antibodies against the one will work on the other. However, in reality, the resemblance between the viral proteins and the syncytin is small. Each of the proteins is made of hundreds of amino acids—nearly a thousand in the viral protein—and there is very little overlap between them. The resemblance is remarkably low and so weak that standard protein comparison tools such as BLAST completely overlook it.

To detect the resemblance, an extremely “dumb” comparison between the proteins’ sequences is required. Why dumb? Because proteins are more than the sum of amino acids assembling them. Advanced comparison tools compare not only the sequence, but also the chemical properties and the expected shape of the protein. Moreover, the receptors of B and T cells identify longer sequences, of at least eight amino acids, and therefore the resemblance of just a few amino acids will not do. It is worth remembering that even the tiniest change in the primary structure of a protein can completely change its tertiary structure and function.

Beyond the scientific reasoning, the weight of the claim is largely based on the identity of its publishers: Michael Yeadon, an executive in Pfizer until 2011, and German physician Wolfgang Wodarg. However, the two have a rich history of making problematic claims and half-truths. Firstly, Yeadon has nothing to do with Pfizer, as he stopped working there almost a decade ago. During the current pandemic, he made numerous false claims, among them the unfounded claim that “the COVID-19 pandemic has ended”, while Wodarg claimed without basis that “the COVID-19 pandemic is no worse than the flu”.

In sum, like many of the claims spoken in recent months regarding the COVID-19 vaccines, this claim is completely unfounded, despite having a certain factual basis. The coronavirus vaccines now awaiting the approval of regulatory health authorities worldwide are based on reliable technologies and their safety has been demonstrated by extensive research.

During the making of this article we used the blog post titled “Are COVID-19 Vaccines Going To Cause Infertility?” by Edward Nirenberg. The use was done with Nirenberg’s approval.