The Stars, The Stripes and... The Caramel

Caramel popcorn is full of contrasts. The popcorn itself is puffy and airy, almost weightless, and is coated with sweet and buttery brittle caramel, a combination of vegetable and candy – yes, culinarily speaking, corn is considered a vegetable.

The snack, commonly known as Cracker Jack, got its start in the 1870s in Chicago, with a recipe created by two brothers, Frederick and Louis Rueckheim. The duo opened up a popcorn store and began experimenting with the goal of creating new flavors. They found their big hit when they mixed popcorn, peanuts and sugar.

Making the caramel for the popcorn depends on the delicate balance between sweet and salty and on creating the right consistency. Since popcorn on its own is somewhat tasteless, most of the flavor is derived from the caramel, and hence its importance. A bit of saltiness can enhance the flavor, but it is important to maintain a correct balance of flavors. The texture of the caramel also hangs on a very delicate balance: caramel which is too liquid will fail to coat the popcorn properly, leaving it sticky, while caramel which is too thick will make it difficult to coat the popcorn evenly.

The following recipe is based on the allrecipes.com website and includes three stages: [1] popcorn preparation, [2] caramel preparation and [3] baking of the caramelized popcorn in the oven to obtain sweet and crispy popcorn.

What will you need?

How to make it? 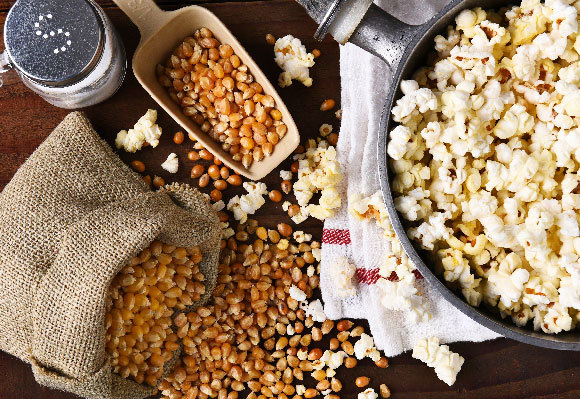 And now, to the science

Caramel popcorn consists of two very different ingredients: caramel and popcorn. Each of them is interesting on its own, and their combination is even more intriguing. The first ingredient are the bursting corn kernels, which seem to turn into white flowers, fluffy and airy. During the bursting process, the water inside the corn kernel heats up and turns to steam, up to the point where the gas pressure ruptures the seed coat and causes the liquid starch to shoot out and solidify quickly into a fluffy white mass, in a fast explosion.

The second ingredient is caramel, which is a product of the caramelization process – a series of reactions and breakdown processes that occur when sugar is heated. During the breakdown of sugar, a multitude of new substances, which are not similar to sugar, are formed. Some are sour or bitter, others emit a strong odor, and others yet are tasteless and odorless but confer caramel with its deep brown color. The more the sugar is heated, the more it will lose its sweetness, acquiring a bitter taste and darkening even more. This is why it is important not to overheat caramel.

Caramel is usually obtained by heating the common sugar, sucrose. In the first stage, sucrose molecules breakdown into their components, the simple monosaccharides glucose and fructose. These continue to disintegrate further into other substances. The process of the breakdown of sucrose begins at temperatures higher than 160 degrees Celsius. 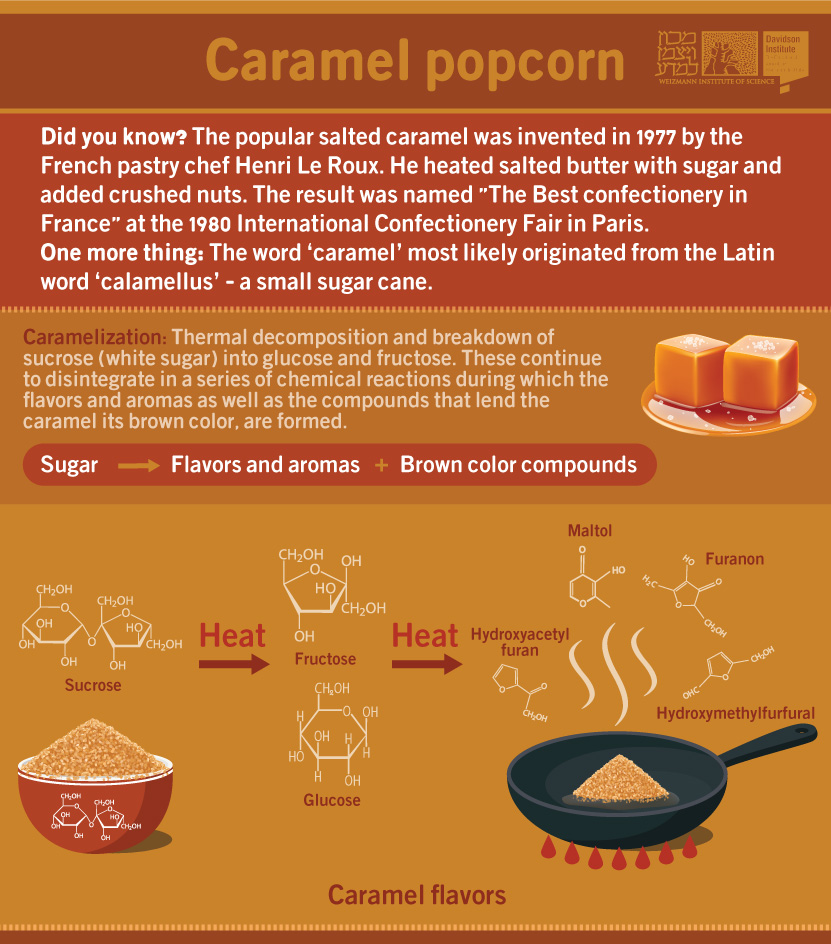 The preparation of caramel begins by heating the sugar with a bit of water – in our recipe we used butter, which contains about 18 percent water. When the temperature reaches over 100 degrees, the water evaporates and molten sugar is obtained. If so, why was the water necessary in the first place? One answer lies in the relationship between solubility and temperature. At room temperature, 204 grams of sugar can be dissolved in 100 ml of water. As the temperature rises, the solubility of sugar increases and more sugar can be dissolved in the same amount of water.

This property is what enables the production of many different types of candy. When the mixture cools to room temperature, the solution behaves differently than the original sugar solution at the same temperature. It becomes sticky, dense and even hard and brittle.

In addition, the more concentrated the sugar solution is, the higher the boiling point of the mixture. For example, water boils at 100 degrees Celsius, but a solution of 80 percent sugar and 20 percent water will boil at 112 degrees. This higher temperature promotes the breakdown of sugar to glucose and fructose. In the process of preparation of sweets, a thermometer is frequently used to monitor temperature changes during the process to obtain the desired consistency for the candy. When the temperature rises to 130-150 degrees Celsius the rich flavors and fragrances characteristic of caramel are obtained. 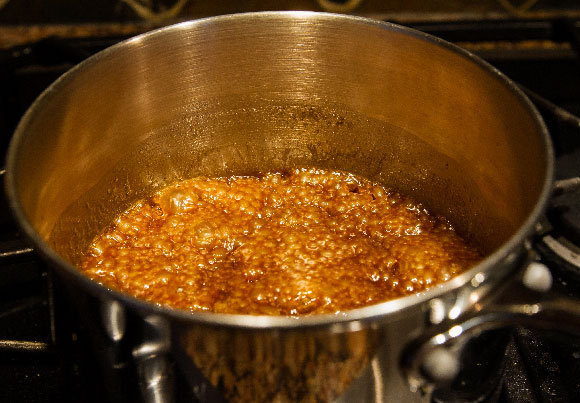 Exactly at the right temperature. Liquid caramel ready to be glazed on the popcorn | Photo: Karynf, Shutterstock

When the caramel is ready and its consistency is just right, this is the time to let it meet the fluffy popcorn. The caramel must be liquid – meaning hot, or else it will solidify – in order for it to coat the popcorn successfully. Once cooled, the caramel will harden and solidify on the surface of the popcorn.

Most recipes include an additional step of baking in the oven. Baking is done below the temperature required for continuing the caramelization process, so it does not affect the color or flavor of the popcorn. The main process taking place during the baking is additional evaporation of water, mainly from the caramel, but also from the popcorn itself. This way, the caramelized popcorn stays crispier for longer. Water also has a tendency to transfer from a humid area to drier ones. Since the popcorn is drier than the caramel, it will absorb moisture from the caramel, and lose some of its crispiness. This is a slow process, so if one intends on eating the caramel popcorn right away, there is no need to dry it in the oven first. Storing it in an air-tight container will prevent it from absorbing moisture from the air later. 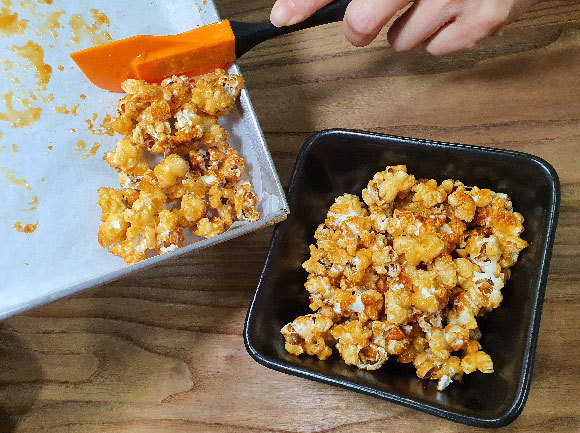 Baking evaporates water from the caramel, and improves the crispiness of the popcorn. Transferring the baked caramel popcorn from the oven tray to a serving dish | Photo: Toshio Chan, Shutterstock

And finally, the recipe includes the addition of baking soda. This addition may seem strange, but it is essential. The baking soda reacts with the acid in the brown sugar and forms tiny bubbles of carbon dioxide that can be detected by the intense bubbling of the hot caramel and its lightening color. This reaction adds airiness to the caramel and makes it more homogenous, which in turn makes it easier to coat the popcorn with it. The air bubbles will also prevent the caramel from hardening too much as it cools.

Consuming large amounts of sugar is detrimental to your health, and therefore caramel popcorn should not be consumed excessively. And to those celebrating overseas – Happy Independence Day and bon appetit!