Theoretically, the elements that make up our world should remain here forever. For practical purposes, though, some might disappear very soon.

One hundred and fifty years ago, the Russian chemist Dimitri Mendeleev arranged all the 63 elements known at that time in a single table according to their atomic weights and chemical properties. Since Mendeleev’s times, the gaps he left in that table have been filled in and now, the periodic table contains 118 elements, with many of the added elements discovered years after his death. For example: The last natural element to be found, called Francium, was only discovered by the French chemist Marguerite Perey in 1939. However, the European Chemical Society warns that in the near future, new types of gaps might appear in the old periodic table.

Recently, to celebrate the 150th anniversary of the first publication of the Periodic Table, the European Chemical Society published a new Periodic Table, containing 90 elements, which make up almost every substance in the world. Each element in the new table was marked with a specific color according to its risk of extinction. Elements appearing in green are present on earth in plentiful quantities, while elements  appearing in red might vanish from our world within the next 100 years. 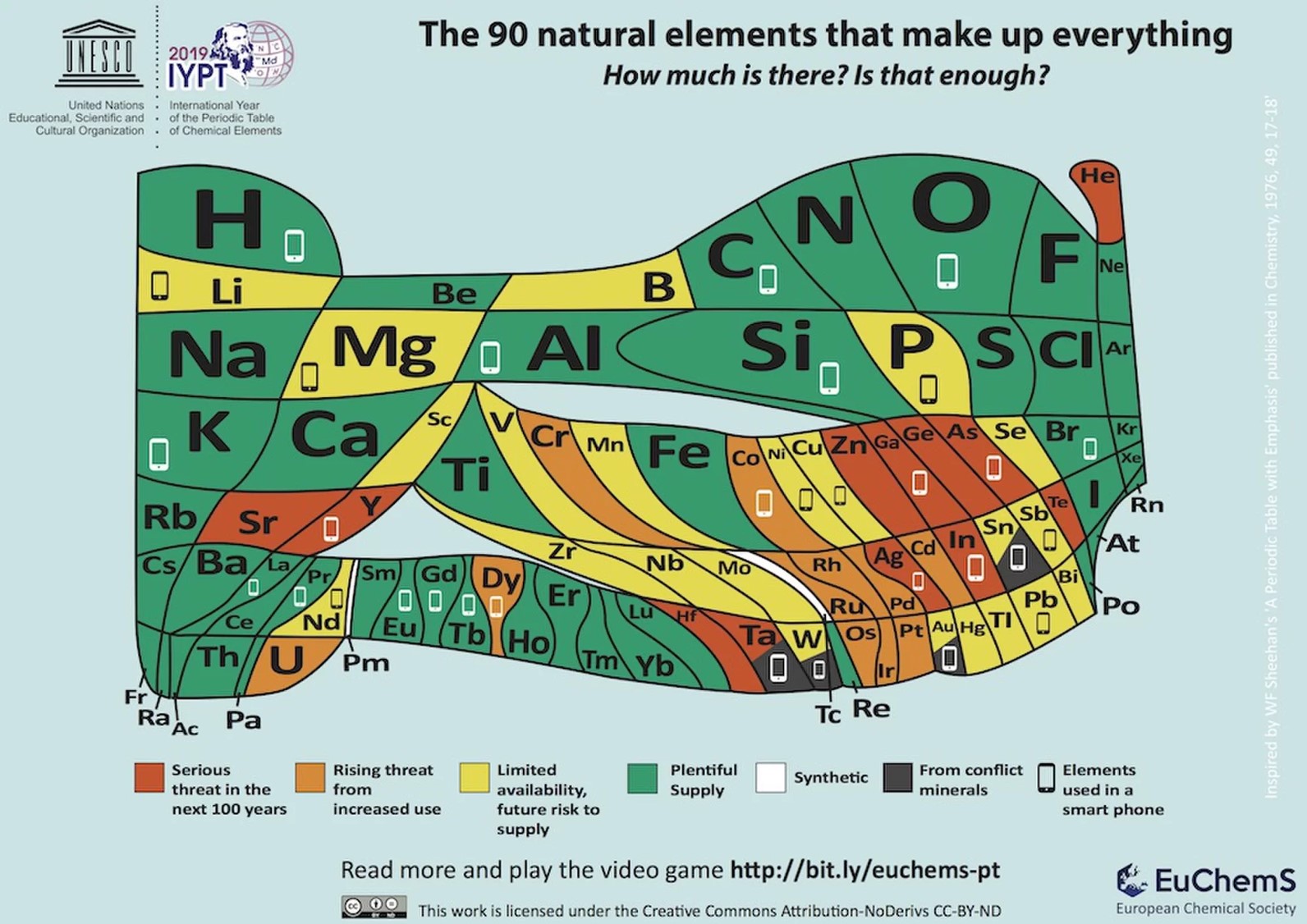 The colors in this table indicate the level of risk that the element might disappear. The icons indicate which elements are used in smartphones. | Source:  EUCHEMS.

The green-colored elements include all the elements that are in plentiful supply and necessary for life, such as oxygen, nitrogen, carbon and hydrogen. In contrast, the red elements are mostly far less known. Some may wonder why we should care about such rare elements in the first place. Who needs them? The answer is: At this very moment, many of those elements are actually in our pockets, or in devices that surround us, usually unbeknownst to us.

The starting point for many of the red elements is far from promising. An element’s abundance is usually classified according to its relative weight in the Earth’s crust, or outer layer. For instance, oxygen comprises 45% of the weight of the Earth’s crust and silicon is 27%. However, there are many other, very rare elements, constituting no more than one thousandth of one percent of the weight of the Earth’s crust. To make these terms easier to understand, from this point on we will use the word “abundance” to refer to weight percentages.

The rare but unused elements are in no danger of vanishing. However, many other rare elements are used to manufacture smartphones and computers. In other words, our consumer habits have a direct effect on their disappearance. A good example is Indium, a silvery-white metal (Atomic number: 63; abundance = 0.000016%), used to manufacture touch screens, among other things. President of the European Chemical Society, David Cole-Hamilton, explains that indium reserves will vanish if we do not stop replacing our smartphones every few years and disposing of the old ones rather than recycling them. “In the UK alone, one million smartphones are replaced each month. At that rate, the world’s supply of indium will be exhausted within 20 years.”

Gallium (atomic number 31; abundance = 0.0019%) is another element on the endangered list. If the supply of gallium runs out in the next 100 years, that will mean an interesting closure of a circle, because one of the “gaps” that Mendeleev predicted would be filled was the space under aluminum in the Periodic Table. Mendeleev called that unknown element “eka-aluminum”, meaning “after aluminum”, and when it was finally discovered it was named gallium. If we run out of gallium, in a sense, the entry for element 31 will be empty once again.

Why will we run out of gallium? Ninety-five percent of the gallium currently produced in the world is used to manufacture gallium arsenide (GaAs), an important semiconductor material and a significant component in the electronics industry. It is used in blue LED lights, lasers and solar panels, including the advanced solar panels in NASA’s Mars exploration probe. 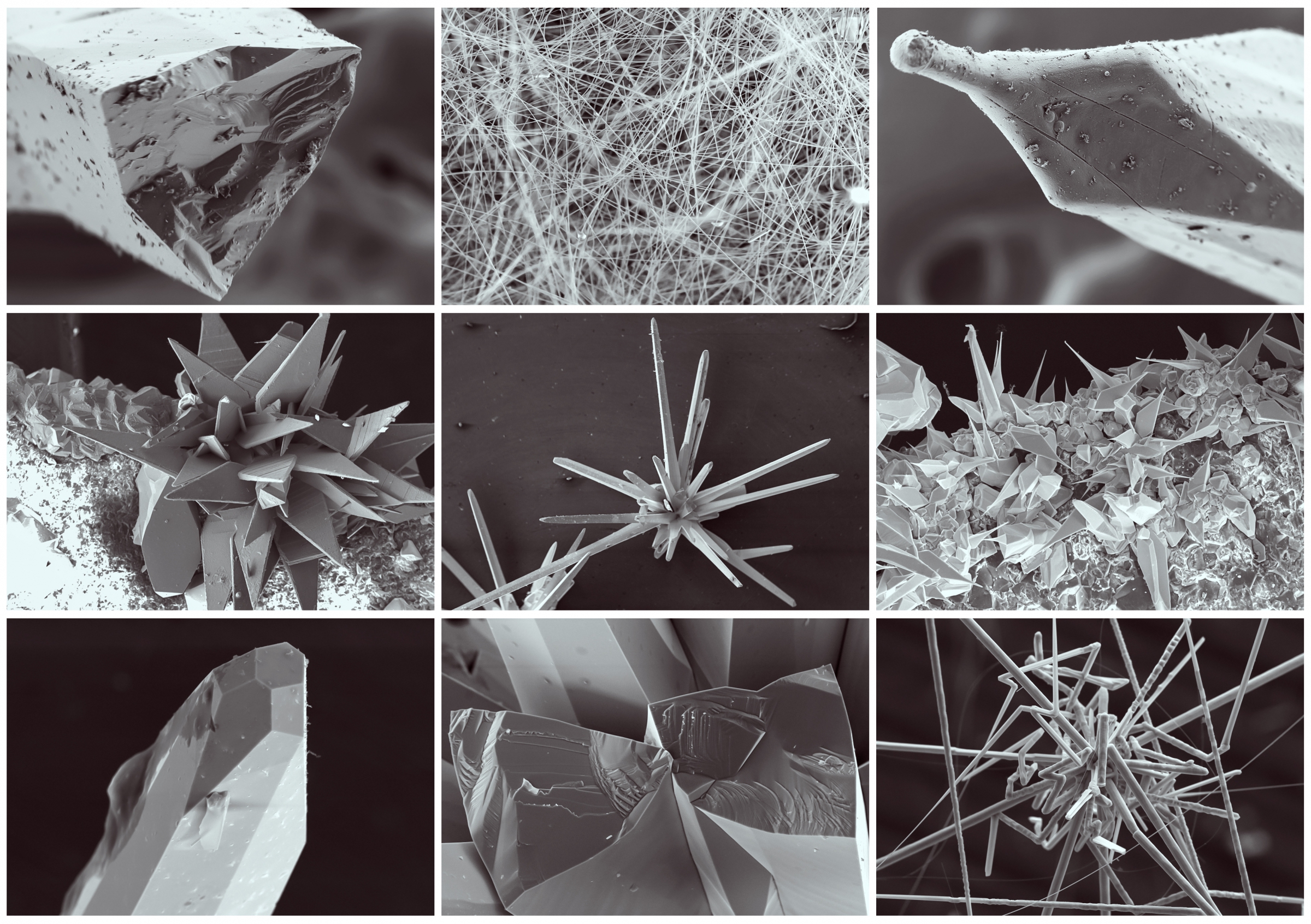 Gallium arsenide crystals photographed by electron microscope. A vital material in the manufacture of components for the electronics industry | Source: Shutterstock.

The Party is Almost Over

The risk of exhausting supply also threatens a festive element – Helium, very often used to blow up party balloons. If we look at the universe as a whole, it is clear that there is no risk whatsoever of helium disappearing, because it comprises 24% of the total mass of the universe and its abundance is second only to hydrogen. However, its abundance on Earth is limited to one thousandth of one percent only. That can be explained by the fact that helium is lighter than air and therefore, very soon after it is released into the air it finds its way out of the atmosphere. Moreover, because it is a noble gas, it rarely combines with other elements to form compounds, as hydrogen does.

What other factors cause the loss of helium? In addition to the use of helium in party balloons, it was used in the past to lift airships and blimps. Nowadays, helium is used as a cooling liquid in MRI devices and advanced particle accelerators, because it has a very low boiling point (minus 269 degrees Celsius), and conducting accurate measurements using these instruments requires exceptionally low temperatures.

However, the helium crisis is probably less severe than it is usually thought. Helium used in scientific applications is usually recycled and not released into the atmosphere. Furthermore, it is also possible that new sources of helium will be found. Even so, current estimates predict that the available stockpiles of helium will vanish soon.

If we continue at our current rate of consumption by releasing helium balloons at birthday parties and we do not recycle used electronics components, it is very likely that over the coming few decades, some elements will vanish. Does that mean our lives will change? Maybe. But there is no certainty that our quality of life will change for the worse if we rely less on smartphones. Who knows? Perhaps if our phones are not quite as smart, we will get smarter ourselves.