Why do a Piano and
a Guitar Sound Differently?

Even when playing the same exact notes, each musical instrument sounds differently. Why? The answer lies in the collection of frequencies and amplitudes that make up the sounds they produce

When we play a certain note on a piano, for example the note C, or any other note, we are able to distinguish it from the same exact note played by a guitar, a violin or by any other instrument. The difference in the sound we hear is called “timbre” or “tone color”, and each instrument has its unique tone color. For the same reason, we are able to distinguish between the voices of different people, even when they utter the exact same words.

In order to understand the difference between the tone colors of different musical instruments, we must first understand what waves are. A wave is a general name for a phenomenon in which a disturbance in a given medium propagates in time or space. We are familiar with many examples of waves in everyday life, for example ocean waves  ocean, which are alterations in the level of the water that advance towards the coast, of for example, during a soccer game we can sometimes see a wave of hands moving across the stadium as fans rise from their seats.

The sounds we hear are also waves - sound waves, meaning changes in air pressure and density that our ears are able to perceive. When we play a musical instrument we create waves that cause the air around us to vibrate, thus creating the sounds that we hear. Two important characteristics of waves in this context are frequency - the number of times that the pressure alters and the air vibrates per unit of time, and the amplitude - an indication for the extent of alterations in air pressure made by the wave. In the case of sound waves, the frequency determines the pitch we hear and the amplitude dictates the intensity or volume of the sound.

The sounds we hear are sound waves, alterations in air pressure and air density around us that our ears can perceive | Christoph Burgstedt, Science Photo Library

How is all of this manifested in a musical instrument? When we play the note C on a piano, the piano’s mechanism strikes the appropriate string with a small hammer. The strike creates a certain wave in the string, which we can think of as oscillations with a certain composition of frequencies - mainly the fundamental frequency, but also other harmonics at higher frequencies. In contrast, plucking a guitar string creates a different composition of harmonics, some stronger and some weaker. The difference in frequencies produces one wave on a piano and another, different wave on a guitar, but as the fundamental frequency is identical, we hear the note C in both cases.

The ratio between the amplitude of the different harmonics can also depend on time, and this can also affect the tone color of the sound. In fact, the main factor that allows us to identify different musical instruments is the ratio between the amplitude of different frequencies during a short period at the first moment of hearing them. For this reason, if we play a note on a certain instrument, and then we play its recording in reverse order, it will sound as if it were played by a different instrument altogether. The harmonics that compose the sound will remain the same, but their amplitude will change in a different pattern over time, and thus will sound different to our ear. 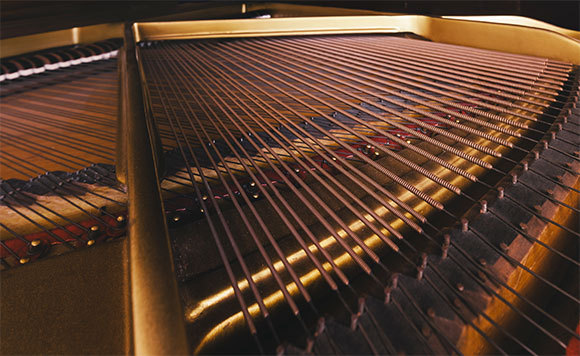 The strings on each instrument vibrate differently, producing a different composition of harmonics. A grand piano | Matthew Hamlyn, Shutterstock

And finally, instruments are also distinguished by their non-harmonic components, which are the sounds that are not directly related to the fundamental frequency or the instrument’s overtones. For example, the musician’s breathing sound or the sound that the musicians’ finger makes while sliding on a guitar string carry great importance. Taken together, these factors give an instrument its signature sound that we learn to associate with it.

Today we know how to use these principles to digitally create sounds of different instruments, with no need for strings and tubes of mechanical instruments to vibrate the air for us. To produce a sound that resembles a guitar, we simply add harmonics at the appropriate amplitudes and obtain a sound that is identical to the plucking of a guitar string. If we want a sound resembling a trumpet, we will compile harmonics in a composition similar to that of a trumpet, and so on.