Warming up in front of the (polluting) fireplace

Despite the romantic imagery of the fire burning in the living room fireplace, burning wood or coal is one of the most harmful methods of heating: both for our health and for the environment.

The winter is coming, and along with it the need to warm up the house. Movies depict loving couples cuddling in front of the lit fireplace, sipping a hot drink and enjoying life. But in fact, heating with wood could be life threatening. Even though it might seem that getting rid of the smoke through the chimney solves the problem, it actually pollutes the air we breathe, as well as our neighbors’.

Burning, or combustion, is a chemical process in which a fuel is oxygenated and emits heat, light and other materials. The details of the process of combustion can be very complex, depending on the kind of material being burned. Complete combustion of methane (natural gas) with oxygen, for instance, emits only water vapor and carbon dioxide into the air. Burning wood on the other hand, emits a myriad of other materials.  If the heat is not high enough, or if there isn’t enough oxygen, a partial combustion occurs, which creates more dangerous materials. For example, instead of producing carbon dioxide, some of the carbon in the wood will react with a single atom of oxygen and will create carbon monoxide instead.

The composition of smoke emitted from burning wood includes a wide range of particles, produced by a variety of processes of heating and oxidation. When organic material such as wood is heated enough, its chemical composition changes as it emits different gases into the air, as well as organic compounds and solid particles. Some of these may burn completely if they are exposed to enough heat and oxygen, while others produce the ash particles that remain after burning. The composition of the smoke is heavily dependent on the conditions under which the combustion occurs, such as the wood composition, the degree of heating and the efficiency of air supply. Wet or painted wood, for instance, will emit more hazardous materials than raw dry wood. 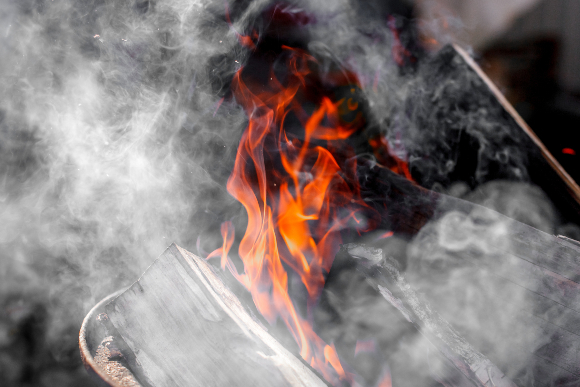 According to the World Health Organization, residential heating using wood and charcoal is responsible for a considerable amount of global air pollution. It is also considered the most polluting heating method, posing a unique danger as the smoke is produced and dispersed within residential areas.

Heating with wood pollutes the air outside the houses as well as inside them. It is responsible for about 30% of emissions of polluting materials in North America and Europe, and it is estimated to have caused the untimely death of about 70 thousand people in 2010 alone. In Israel, heating is mostly attained by the use of electrical appliances such as air conditioners. However, according to data from the Ministry of Environmental Protection, wood heat is responsible for nearly ten percent of dangerous particulate matter emissions in Israel.

The smoke causes real damage to public health. Particulate matter easily enters the respiratory system and from there continues into the bloodstream, and damages both systems, especially if the particles are small: under 2.5 micrometers (thousandths of a millimeter). Hundreds of epidemiological studies clearly connect the increase in the concentration of particulate matter in the open air to an increase in death and hospitalization rates.

Burning wood for heat has been associated among other things to an increased rate of respiratory diseases such as chronic obstructive pulmonary disease (COPD) and asthma, which are considered especially dangerous for children, the elderly, and those who suffer from heart and lung diseases. To make things worse, wood-derived smoke contains at least 14 different kinds of carcinogens or suspected carcinogens.  Among these are toxic organic compounds such as benzene and dangerous metals such as cadmium. Exposure to smoke increases the risk of developing numerous types of cancer, with lung cancer and breast cancer being the most prominent. In addition, carbon monoxide poisoning hinders the capacity of hemoglobin in red blood cells to carry oxygen. In extreme cases, when there is not adequate air circulation in the house and around the fireplace, it can cause death by asphyxiation. 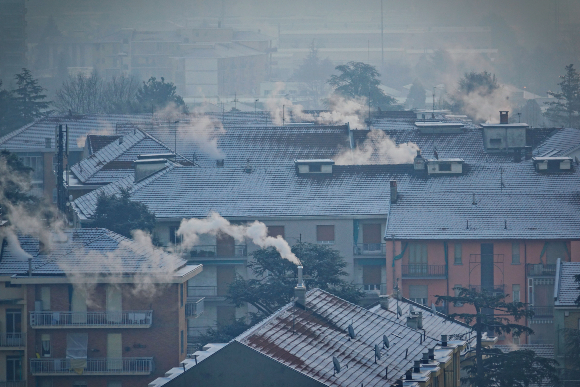 Hope is not lost

There is no doubt that heating with wood is harmful to our health, and it also contributes to global warming. However, it is relatively easy to avoid. The cheapest way to heat a house in Israel is by using an air conditioner with a high efficiency rating. Even less efficient appliances, such as a radiant heater or an electric radiator, provide warmth without drying out the air, and are still cheaper to run compared to a fireplace or hearth. Heating with a gas heater provides the feeling of a hearth, and as long as the room is properly ventilated, the health hazard posed by its emissions remains low. In cold countries, such as Sweden, regional heating systems are used, which reduced the pollution in the cities considerably. In this method, water is heated to steam extremely efficiently, which is then pumped through pipes throughout the city to warm the houses.

The dangers posed by heating with wood have led certain places in the world to completely ban its use. In Israel too, despite heavy criticism of the lack of legislation and adequate enforcement, municipalities such as Tel-Aviv and Kfar Saba have banned installation of new wood-fueled hearths within their jurisdiction. In the United States, wood-fueled fireplaces must meet high environmental standards. The structure of these fireplaces increases the heat and efficiency of combustion, thereby decreasing the amount of pollutants they emit. The most efficient fireplaces are automatic, and burn only dry wood pellets - wood pieces processed especially for fireplaces.

Modern fireplaces are built to reduce the pollution emitted in the house, but do not prevent pollution of the outside air, nor do they prevent the expelled pollution from entering other homes. Catalytic converters and other filtering systems reduce pollutant emission, but their efficiency is severely compromised if not regularly cleaned and maintained according to the manufacturer's instructions. Used correctly, modern hearths which meet the highest standards could reduce pollutant emissions by up to 90%. However, compared to the alternative methods of heating, such as with electricity or gas, they are still very polluting.

Heating homes by burning wood or charcoal emits a multitude of materials hazardous to our health and our neighbors’ health. The obvious choice, for us and for policy makers, is to install an efficient air conditioner, which is cheap and environmentally friendly to run, or use other alternatives, which outperform any fireplace or hearth. The ball is in our court.