The Chemistry
of Gel Nail Polish

What are the differences between conventional nail polish and gel nail polish, why is an ultraviolet lamp needed in the latter case and what should one be aware of when using gel nail polish? The gel that dyes our nails

Humans have been coloring their nails for several thousands of years. Early evidence of nail painting was found in Egyptian mummies dated to over 5,000 years ago. Around the same time, women in India already used to stain their fingernails with henna colors, and men in ancient Babylon wore blue on their nails. Throughout most of history, the habit of taking care of and coloring fingernails was mainly the domain of upper class women. In recent decades, the custom has grown increasingly common, and has even become an art form and has integrated into popular culture, fashion and even music. In the year 2020, the global market of nail polish was estimated at 10.5 billion dollars and is projected to reach a size of 18 billion dollars by 2027. 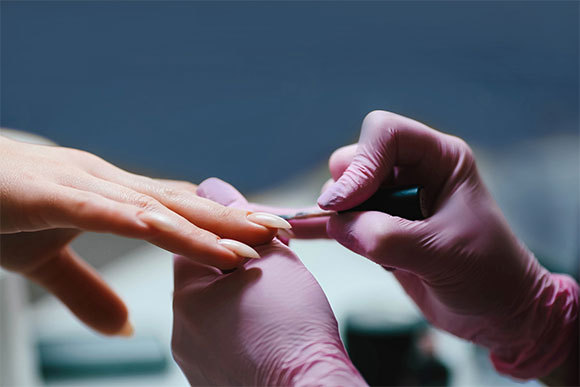 A tradition of thousands of years. Applying nail polish at a beauty parlor | Image:  smile23, Shutterstock

The conventional nail polish is mainly made of nitrocellulose and dyes (pigments) that are dissolved in a volatile organic solvent. Nitrocellulose is a substance made of cellulose, which is a polymer found in plants, that is, a long molecule composed of a chain of short units called ‘monomers’, that repeat multiple times. The common solvents in nail polish are substances with a strong odor, called acetate compounds, which some people like while others heartilly despise.

The role of nitrocellulose is to create a glossy layer that adheres to the surface of the nail. The coloring materials are usually organic pigments, very similar to common food colors, or inorganic minerals such as chromium oxides (green) and iron oxides (red). Once the nail polish is applied, the solvent slowly evaporates and leaves a thin film of nitrocellulose and dye on the nail. The prolonged evaporation time of the solvent is the reason why you have to wait for the nail polish to ‘dry’ and the source of countless disappointments due to a manicure gone wrong.

In addition to these main ingredients, it is also customary to add to nail polish softeners (plasticizers), which help to prevent cracks in the glossy layer, as well as substances that delay the fading of the nail polish pigments in the sun. To remove nail polish, the nitrocellulose layer needs to be re-dissolved, usually using organic solvents such as acetone. 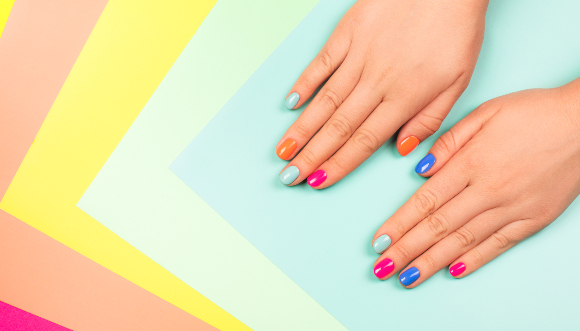 In contrast to conventional nail polish, gel nail polish does not contain nitrocellulose and, in fact, does not contain an entire polymer. During the process of application of gel nail polish an ultraviolet (UV) lamp is used to create the long polymer chains directly upon the nail. Gel nail polish contains the building blocks of the polymer, such as methacrylates, in dissolved form. In addition, gel nail polish also contains photoinitiators - molecules that initiate a chemical reaction upon absorption of light at a certain wavelength. In this case, ultraviolet radiation causes the photoinitiator to initiate a polymerization reaction, in which the building blocks in the solution connect to form a long polymer chain that hardens on the nail. Gel nail polish also contains pigments and stabilizers, similar to conventional nail polish.

One of the most common photoinitiators in gel nail polish is benzoyl peroxide. Upon exposure to ultraviolet radiation it breaks down into active molecules that are free radicals, which generate the chemical reaction in which the dissolved components form a stiff and shiny layer on the nail. 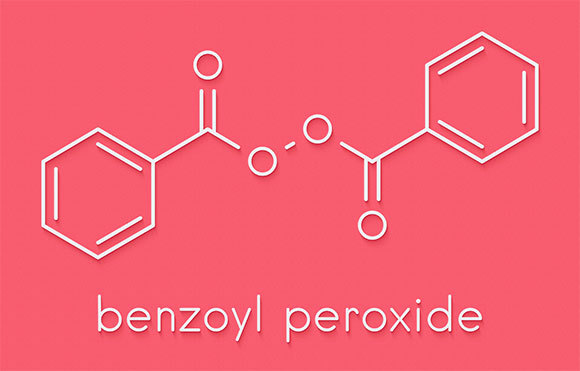 Molecules that begin to act upon exposure to ultraviolet radiation. Benzoyl peroxide, one of the common photoinitiators in gel nail polish | Illustration:  StudioMolekuul, Shutterstock

Easy to Apply, Difficult to Remove

Soaking in acetone may irritate the skin, since acetone also dissolves the natural oils present on the skin. This is why it is recommended to remove nail polish using a cotton ball soaked with acetone, in contrast to soaking the fingers directly in the acetone. 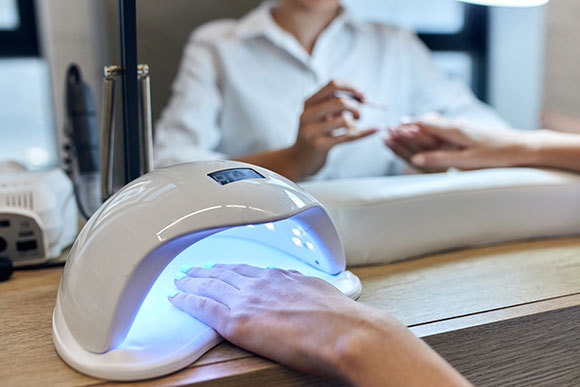 The fun does not end here, since those who are interested can upgrade their nail polish even further. It is possible to add to the gel polish solution substances that change its finish and appearance. One can add substances that endow the polish with a pearl-like finish, and sometimes, the added glitters or pigments change their color when exposed to sunlight, as in the case of spiropyrans. These compounds are sensitive to the sun’s UV radiation and their structure changes upon exposure to daylight. As a result of the structural change, the color of the nail polish changes as well.

When choosing gel nail polish, it is also important to take into account the risks involved in its use. The American Academy of Dermatology recommends carefully choosing your nail salon and making sure sterile tools are used during application; prior to treatment a generous layer of sunscreen should be applied to the palms of the hands, in order to prevent the damage from the ultraviolet lamp used for drying the gel. Ultraviolet light is a type of high-energy radiation that may cause cancer following repeated exposure. A sunscreen with a high SPF (sun protection factor) and a broad spectrum should be used. Another option is to wear opaque gloves, the tips of which were cut off, to expose the nails only.

Additionally, it is important not to peel the polish off the nails, and moreover so, not to use any mechanical instrument that may damage the nail and its surroundings, which would further increase the risk associated with exposure to chemicals. It is also recommended to limit the contact area of acetone and other nail polish removers with your skin as much as possible. And finally, if you truly want to keep your nails healthy, it is better to choose conventional nail polish over gel nail polish, and also to give your nails a break from nail polish every once in a while. Who knows? You may find that natural airy nails actually suit you better.