Everyone knows that lunar gravity is responsible for tidal cycles, but the actual process is more complex than commonly perceived. And how is this related to Israel’s first computer?

Tidal cycles are among the most significant phenomena on Earth. They affect not only the evolution of life along the coasts, but also the biological cycles of organisms that originally evolved from them, including humans. Their impact on sea currents is highly significant for marine navigation, and therefore also for global trade and for the economy. Although almost everyone knows that they are caused by lunar gravity, it turns out that our intuitive perception of the phenomenon is far from accurate.

Tide occurs at any given moment in two different regions on Earth - the side closest to the Moon and the side opposite to it - the farthest from the Moon. It takes 24 hours and 50 minutes from the time at which a certain point on Earth is at the shortest distance from the Moon until the next time at which this exact point will reach this position again. Therefore the tidal frequency is exactly half of this time period, 12 hours and 25 minutes. The intensity of the tide, that is, the difference between water levels at the height of the tide and at low tide, varies from place to place on Earth. The highest tide in the world occurs in the Bay of Fundy in Canada. 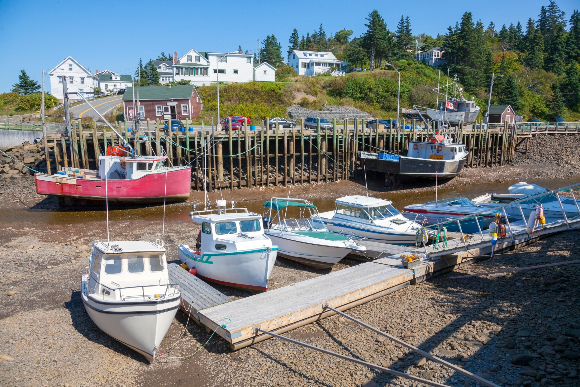 At low tide the boats rest at the bottom. A dock at the Bay of Fundy, where the difference between high and low tide is the largest in the world | Image: Noel V. Baebler, Shutterstock

The source of the forces that drive tides is in the force of gravity acting between the Earth and the Moon. Interestingly, the way by which this happens is not self-evident. The first scientific explanation for the phenomenon was given by the discoverer of the law of gravity, Sir Issac Newton, who explained that water levels in a certain region on Earth rise as it passes along the imaginary axis connecting the Earth and the Moon. Newton reasoned that since gravity becomes weaker as distance grows, the force exerted by the Moon on the point closest to it on Earth is proportionally larger than the force exerted by it on the center of the Earth. Similarly, on the side of Earth farthest from the Moon the gravity is relatively weaker compared to the force applied on the center of the Earth, causing water to recede.

Newton’s explanation was in accordance with the cyclical nature of tide frequencies and with the fact that it occurs simultaneously on two opposite ends of the Earth. But it had a problem - the numbers just did not add up. When one calculates the actual gravity that the Moon exerts on the water and its change along the equator, the calculated forces turn out to be rather weak and highly unlikely to account for the observed rise in water levels.

Several decades after Newton, in 1775, the French mathematician and physicist Pierre-Simon Laplace proposed a different explanation for the phenomenon of tides, which was based on an analysis of surface water flow. The dynamic theory he proposed was significantly different from that of Newton. Laplace realized that the source of tides was in the motion of waves on Earth. These, he reasoned, are not only affected by lunar gravity, but also by the structure of the continents and the Earth’s rotation. Water levels rise along the axis connecting the Earth and the Moon since the differences in gravity along the Earth’s circumference create waves in all other longitudinal and horizontal lines, and these move towards the axis connecting the Earth and the Moon, accumulating on both sides of the globe.

The practical implication is that tides are not a local phenomenon, but a global one. They are affected by the interaction between oceans and seas and by the structure of the continents, and are accompanied by significant water flow on the surface. In certain places on Earth it is even possible to observe how such currents can change the direction of rivers during tide.

According to Laplace, the Moon’s gravity has a dynamic effect on water currents all around planet Earth. Arrows represent the gravitational force of the moon relative to the gravity at the center of the Earth | Image: Maria Gorohovski and Liat Marcus, according to: W.S. von Arx, An Introduction to Physical Oceanography

Laplace’s theory introduced several surprising innovations compared to Newton’s. One of these was that in practice, the shape of the continents has a significant effect on the height of the tide in different places on Earth, such that peak of the tide does not necessarily occur along the axis connecting the Earth and the Moon, but rather at some distance from it. Additionally, by describing the tidal phenomenon as a motion of waves on the surface it follows that the height of tide at a certain geographical point is the sum of all the waves that reach that point. Thus, it is possible that waves of opposite amplitudes, whose sum effect is zero, will meet at a certain geographical point, resulting in a phenomenon called destructive interference. This implies that there are locations on Earth where no tides occur. Indeed, over the years several such locations have been discovered, and these are termed ‘tidal nodes’ or ‘amphidromic points’. 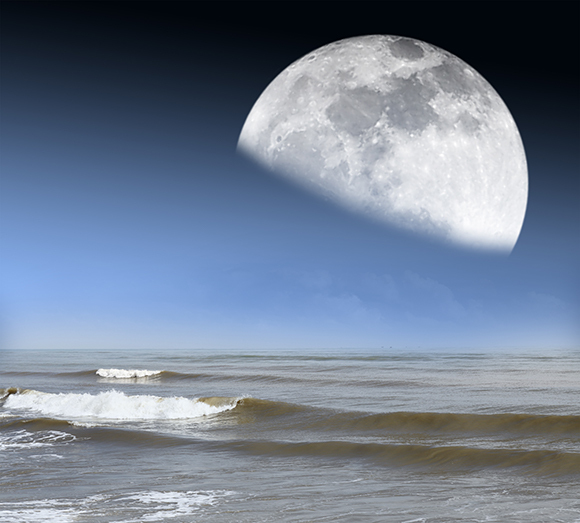 Lunar gravity affects different places in different ways, and sometimes it does not affect them at all. A simulation of the Moon over an ocean shore | Image: Gwoeii, Shutterstock

From description to prediction

Laplace was the first to view the tidal phenomenon as a function of water in motion, in contrast to the static image presented by Newton. However, his hydrodynamic equations, which describe the movement of tidal waves across the ocean, could not be solved completely without the use of computers, which, naturally, did not exist at the time.

Over the years, several attempts have been made to reach approximate solutions for these equations in order to successfully predict tidal times. The need for accurate forecasts grew steadily with the development of maritime transportation and naval trade, which greatly depended on currents and tides and created a demand for reliable tables and formulas that would help with forecasting.

The first tide forecast machine was designed by the British scientist William Thomson, better known by the title Lord Kelvin. It was manufactured in 1873 under the auspices of the British Science Association. Nine year later, in 1882, The American mathematician William Ferrel developed the first tide-predicting machine for the timing and height of tides along the coasts of the United States. The machine was in use for over a century, up until 1991.

A significant breakthrough in the solution of Laplace's tidal equations was achieved only during the second half of the 20th century, following the invention of the first electronic computer. In 1969, the founder of the Faculty of Mathematics at the Weizmann Institute of Science, Chaim Leib Pekeris, used the first Israeli computer, the WEIZAC, to solve Laplace’s equations for the structure of continents and coastlines of the Earth. One of his greatest successes was the calculation-based prediction of a new amphidromic point in the South Atlantic Ocean, a place where no tides exist. Measurements later performed by the British Navy confirmed the existence and location of this amphidromic point. 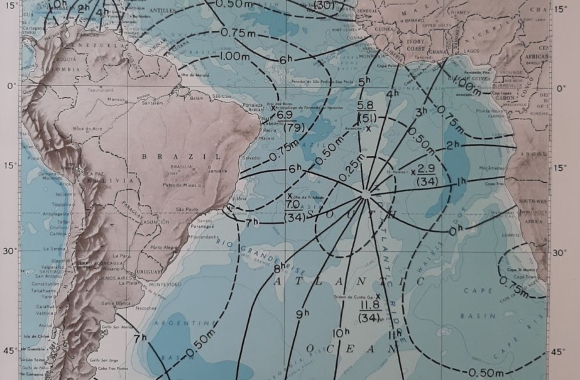 Mapping of tide height and tide times in the South Pacific Ocean. The circle at 15 degrees latitude and 20 degrees longitude represents the amphidromic point - a tideless region. Click on the image to zoom in | From Pekeris and Accad, 1969

Thus, tide research is far more complex than Newton initially believed, and though his theory was fundamentally correct, it was not enough to explain the multitude of observations and findings. Only a view of the world as one complete system made it possible to theoretically calculate, more than 200 years later, the tides all over the Earth. Newton himself understood the complexity of the scientific practice when he said, “to myself I seem only to have been like a boy, playing on the seashore, and diverting myself in now and then finding a smoother pebble or a prettier shell than ordinary, whilst the great ocean of truth lay all undiscovered before me."