The electronic cigarette is often advertised as a magic solution for smokers. In practice, very few studies have examined its possible harmful effects, especially in the long run.

What is an electronic cigarette and how does it work?

The modern electronic cigarette was invented in 2003 by Chinese pharmacist Hon Lik, after his father died of lung cancer. As of 2015, most electronic cigarettes are manufactured in China. Since they were first sold in 2004, their global popularity has skyrocketed. They are particularly popular in the U.K. and the U.S., especially among teenagers.
Unlike regular cigarettes, which burn a blend of tobacco and other compounds, in the electronic cigarette, liquid is heated to create vapor, which the smoker inhales into the lungs instead of smoke. The liquid, also called e-liquid, usually contains propylene glycol, glycerin, nicotine, flavorings, and additives (some electronic cigarettes do not contain nicotine). These compounds are found also in regular tobacco cigarettes, together with many others.
The device is a battery-operated atomizer. Its main parts are the mouthpiece, cartridge, heating unit or atomizer, micro-processor, battery, and sometimes a LED light (a light-emitting diode) at the edge. The atomizer is comprised of a heating element that vaporizes the liquid and a material that pulls the liquid into a coil by capillarity.
The heating element is activated by pressing a button or by inhaling air, which activates a pressure sensor, and when warmed to a temperature of 100-250° Celsius, the liquid turns into a spray. The LED light is also activated when inhaling, to indicate the device is active. Rather than smoke, the user inhales a flavorful spray, which provides a sensation similar to tobacco smoking. Electronic cigarette use is termed ‘vaping’ because of this vaporizing process. 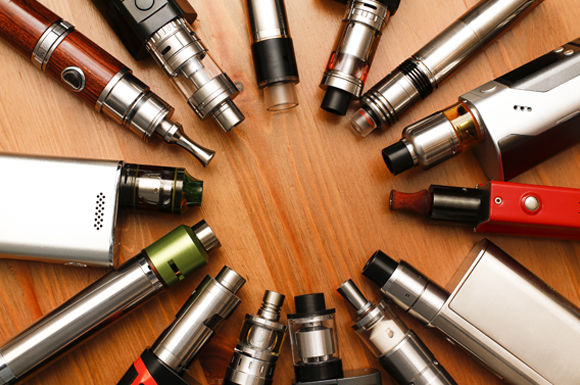 The electronic cigarette is a battery-operated vaporizer. Photography: Shutterstock. 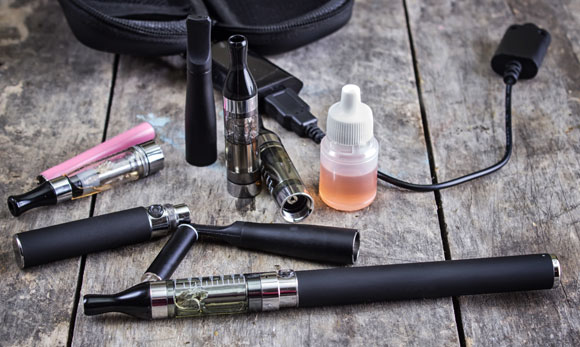 A study from February 2019 showed that chemicals in electronic cigarettes, which are also responsible for the buttery flavor of microwave popcorn, cause genetic changes in cultured human respiratory tract cells. Some of the affected genes are linked to the function of cilia in the bronchi of the lungs and play an important role in clearing away foreign particles in the lungs. Treating the cultured cells with the flavor molecules reduced the number of cells that expressed cilia, hinting that these compounds may damage lung function. Further research is obviously needed in order to further establish this finding.
Another study, using more physiological conditions, was published in January 2019. Its found genetic changes in the cells lining the inside the mouth, both in tobacco cigarettes smokers (24 participants) and electronic cigarette users (42 participants), compared to nonsmokers (27 participants). Even though in both experimental groups there were many genetic changes as compared with the control group (nonsmokers), more genetic changes were found in the tobacco smokers’ group than in the electronic cigarette users (1,726 compared with 1,152).
Further analysis of the genes whose expression altered in both groups showed that more than 60% of the genes were involved in cancer-related processes, although it is not possible to conclude that the changes directly lead to cancer. In this case again, further research that will examine more participants and delve deeper into how the affected genes are linked to disease, if at all, is needed.

The association between electronic and tobacco cigarettes A concern of an addiction that will increase the number of smokers. The structure of a nicotine molecule. Source: Science Photo Library.

In August 2019, the Washington Post reported a mysterious lung disease that afflicted almost a hundred electronic cigarette users in 14 states across the U.S. Seven people have died, after being hospitalized with lung disease which was suspected to be associated with vaping.
Based on these, and similar, cases, the U.S. Center for Disease Control and Prevention (CDC) conducted a study that found 805 cases of suspected lung diseases and 16 cases of death related to the use of electronic cigarettes in 46 states and one territory (the Virgin Islands) in the U.S. However, a report published in September 2019, stated that a specific cause for the mysterious disease was not found and that no specific type of electronic cigarette causing it could be identified. A recommendation accompanied this statement, not to use electronic cigarettes – emphasizing teenagers, young adults, and pregnant women – primary target audiences for the product. Following the recent discoveries, the Israeli Ministry of Health announced, on September 24, 2019, that it is considering prohibiting the marketing and sales of electronic cigarettes in Israel.
Currently, there is no broad consensus about the damage of electronic cigarettes compared to tobacco cigarettes, mostly because of the large variance among the different types of vaping devices and the lack of control of many variables. The long-term effects of using them is unknown chiefly because they are in the market not long enough to be fully understood. Further and more comprehensive research about the dangers of using electronic cigarettes is needed, and in parallel, to emphasize the caution needed, primarily among teenagers who are subject to peer pressure and tend to take more risks than others in of society.