The Chemistry of Ice Cream

There’s nothing quite as refreshing as ice cream on a hot summer’s day: The sweet and rich flavour, refreshing chill, and no less important – a softness that just melts in your mouth. That softness is no mere trifle, considering that freezing water forms hard ice. So how does a liquid mixture keep its soft texture once frozen? The answers lie in its ingredients and production process.

Ice crystals in a thick liquid

Ice cream isn’t just a frozen solid, like ice, but has a special microscopic structure. In science, this structure is called a “colloid”, which, in simple terms, is a mixture of small particles of one substance evenly dispersed throughout another. There are many colloids in our kitchens: In milk, for example, drops of fat are suspended in water, as is tahini, mayonnaise, and others. In ice cream, small ice crystals are dispersed throughout a thick liquid of sugar-rich water, alongside globules of fat from the cream used to make most ice cream types.

Another important ingredient that isn’t mentioned on the package is air, which usually comprises about half of the volume. You can see this when you compare the weight of the ice cream package to its volume: Ice cream weighs much less than ice of the same volume (weighing a little less than 1 kg per liter). Although the producers have a financial incentive to enlarge the amount of air in the product, this isn’t cheating: The air, more than anything else inside ice cream, is what gives it its softness. And air means you can make soft ice cream with fewer calories in each scoop.

Ice cream today is usually produced in a machine that has a mixer in a tank whose walls are chilled to -30℃. The faster the liquid chills, the smaller and more subtle the ice crystals formed. The tank wall’s low temperature allows for a considerably faster freezing of water than the home freezing process. That’s how you achieve a soft and uniform cream, while a slow freeze will produce large crystals and a coarser texture. Whirling the mixture maintains a constant temperature and also introduces air, just like to a whipping process. It also helps create a finer texture, by breaking the ice particles and preventing the creation of coarse crystals.

Furthermore, although water freezes at 0℃, its freezing point is lowered once other substances, like sugar, are dissolved in it. When the mixture begins to cool down, the first to freeze will be the ice crystals that are mostly water in composition, while the sugar-rich water remains liquid. Eventually, you get ice particles inside a thick, sugar-rich, syrup-like liquid which does not freeze, that also contains small air bubbles and drops of fat. That is why ice cream isn’t solid, but rather, a mixture of three states of matter: Solid ice, liquid sugar water, and air as a gas. And that’s what makes it soft. 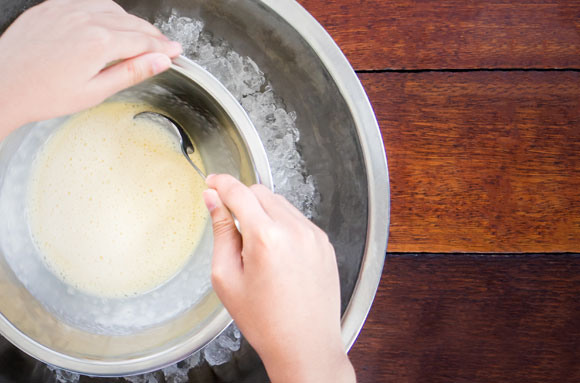 To make a soft texture you need to cool quickly while mixing. Making ice cream without a machine. Shutterstock.

Chemistry plays a role not only in making ice cream, but also in its storage. This is because even when it freezes, many degrees below 0℃, several processes are at play, resulting in the change in its texture. A phenomenon called “coarsening” causes the tiny ice crystals in the ice cream to grow with time, even without the ice cream defrosting and freezing again. The outcome of this process is that the mixture grows coarser and more crystalized. Coarsening can take place in the home freezer’s lower temperature (about -18℃) but it is more rapid when the temperature is higher. Thus, if ice cream is stored at higher temperatures, coarsening will take place faster and the ice cream’s texture will deteriorate. That is why it’s important to keep the ice cream as close as possible to the back of the freezer and reduce the amount of time it spends outside. 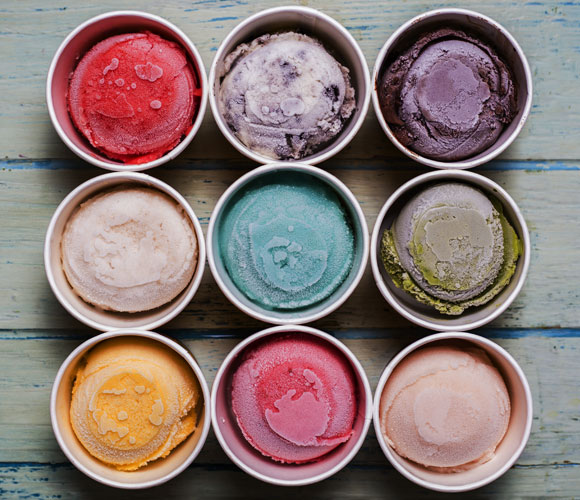 During storage, ice crystals can form that damage the texture of ice cream. Various flavors with ice on top. Shutterstock

That’s the science that allows a favorite dessert to be both frozen and soft at the same time. Think about that next time you have a scoop of your favorite ice cream.