The Warning Screams
of Bees

Dr. Heather Mattila has been researching honey bees for more than twenty years. However, only when she arrived in Vietnam did she first hear the bees screaming. These were loud, sharp sounds, which were produced not by the mouths of the bees but by their bodies and wings: they pressed their torso onto the wall of the hive, lifted their abdomen in the air and vibrated their wings at high speed, creating a loud buzzing sound and generating vibrations within the hive, which could be detected by the other bees.

The Asian honey bees (Apis cerana) have a very good reason for producing these sounds, in contrast to the European honey bees (Apis mellifera), the main species cultivated by beekeepers around the world, which have not been documented to exhibit such a behaviour. The Asian bees have true archenemies – large hornets, of the species Vespa soror - break into their hives, kill the worker bees and devour the eggs and larvae. Since these bees have been facing this threat for many generations, they have developed a number of ways to deal with it. Guard bees positioned at the entrance to the hive try to fend off the hornets and prevent them from enlarging the small opening and getting inside; if this attempt fails, worker bees come out of the hive and gather into a tight bee-ball, which surrounds each hornet, heating and suffocating it until it dies, quite often along with some of the bees that took part in the defense. 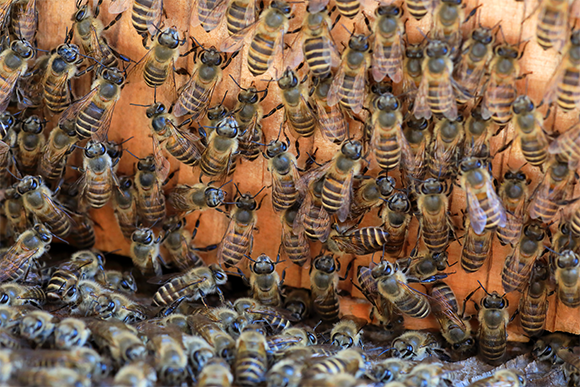 A research paper published about a year ago, showed that bees take additional measures to deter the hornets from the beehives: they collect small balls of mammal and bird feces and stick these around the entrance to the hive. The odor appears to deter the hornets, as they visit the “decorated” hives less often.

Dr. Mattila, who led this study, noticed the special behavior of the bees while their hives were attacked by hornets: they were running around, buzzing and producing sharp scream-like sounds. “There is something very human and very familiar in these sounds”, said Dr. Mattila in an interview with the New York Times. To examine the sounds produced by the bees and to try to understand their meaning, she and her colleagues both recorded the sounds of the bees from inside their hives and filmed their actions from the outside. In a recently published research paper, they suggest that these “screams” serve as warning calls that recruit and mobilize the other bees to act against the invaders.

A Call of Duty

In order to check what causes bees to produce scream-like sounds, the researchers placed a paper soaked with the smell of the hornet species Vespa soror near the hive. These are giant and aggressive hornets that hunt in groups, and are capable of completely obliterating the hive they attack: they kill many of the adult bees, drive away the rest, take over the structure itself and seize the eggs and larvae to feed their offspring.

The findings showed that, upon smelling the hornets, the bees increased the communication between them, and the hive became much noisier. It was not only the amount of buzzing, but also the type of buzzing in response to the hornet smell. In response to smell, the bees produced the sharp scream-like sounds that they hardly ever produced in any other situation. Recordings from outside and inside the hive revealed that when the bees outside began to “scream”, they were joined by the bees on the inside, spreading the sounds throughout the entire hive.

As a control, the researchers placed a paper soaked with the smell of a different hornet species, Vespa velutina, in the vicinity of the hive. These too are predaceous hornets, but they are smaller in size and attack individually rather than in groups. These hornets may attack individual bees, but do not pose a threat to the entire hive. Accordingly, the bees’ response to the presence of the smell was more limited: they increased the buzzing and calling, but this reaction was significantly less intense compared to their reaction to the smell of the giant hornets, V. soror.

The researchers hypothesize that the production of these sharp scream-like sounds developed as a method of defense against the hornets, which allows for quick recruitment of the worker bees to defend their hive. “This research shows how amazingly complex signals produced by Asian hive bees can be”, said Gard Otis, Dr. Mattila’s colleague. “We feel like we have only grazed the surface of understanding their communication. There’s a lot more to be learned”.