Bouba or Kiki?
It Simply Sounds Like That To Me

People from all over the world associate a particular visual shape with a particular made-up word. Can this tell us something about the connection between shapes and sounds or about the evolution of spoken language?

If your answer was that the name Bouba corresponds to the more rounded shape, while the name Kiki corresponds to the shape with the pointy edges - you are in good company. The vast majority of respondents answer this question in a similar manner, and a new study has recently demonstrated this to be true across a variety of cultures, with the poll results being alike for speakers of no less than 25 languages, including nine language families and 10 different writing systems. This may not sound of particular importance - after all, what difference does it make which nonce word do we associate with which abstract shape? - but the fact that people from entirely different places around the globe form similar associations between sounds and shapes can be significant for the understanding of the evolution of spoken language in the early days of mankind.

Some words phonetically imitate the object or concept they describe, suggesting their meaning by their sound. For example, the word ‘beeping’ describes a beep sound, the word ‘bang’ describes an impact sound, and words like ‘squeak’, ‘babble’, 'boom', 'click' and 'splash' phonetically imitate the sounds they refer to. This phenomenon, termed Onomatopoeia, is not rare, but it is not very common either. Most of the words we use are not onomatopoeic and their sounds appear completely arbitrary, at least at first glance. For example, the fact that a table is called a table seems to be the result of a purely arbitrary choice. The strongest evidence in support of this is the fact that different languages chose completely different sounds to describe the same object: table in English, stol (стол) in Russian or ta’lika (तालिका) in Nepalese.

The hypothesis that a word is merely an arbitrary collection of sounds, with no deeper phonetic connection to the object it describes, has been dominant among linguists and language researchers for decades. Studies that describe the bouba/kiki effect, in an attempt to address this question, undermine this approach. If most of us clearly see that certain speech sounds belong with certain visual shapes, maybe our words are not as arbitrary as we may think.

The bouba/kiki effect was first observed by German psychologist Wolfgang Köhler in 1929, who presented subjects with shapes similar to the ones above, asking them to match the shapes to the nonce words ‘baluba’ and ‘takete’. A new research on this subject, published in 2001 by neuroscientists Ramachandran and Hubbar, which included the words Bouba and Kiki, sparked a new wave of interest in the field. One of the main open questions concerns the universal nature of this phenomenon - for example, could it be related to certain associations that these sounds generate in English speakers? Are these same associations present only for speakers of Germanic languages (including English)? Also, could it be possible that the way by which a word is written influences people's reactions to it? For example, is it possible that the word Kiki appears pointy when written in English, and thus English speakers associate it with the pointy shape? 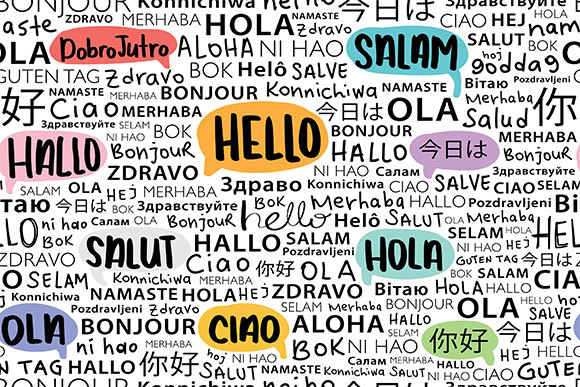 The first verbal communication may have developed from sounds that have some internal meaning. The word “hello” in different languages | Image: Aysezgicmeli, Shutterstock

In order to answer these questions, different researchers asked people from different cultures, speakers of different languages, to match the names Bouba and Kiki to the two shapes. The new research is the most extensive to date - it included over 900 subjects, who speak 25 different languages, belonging to nine different language families and 10 different writing systems (namely - different alphabets), from Greek to Persian and from Zulu to Mandarin.

The results demonstrated that in most languages, the majority of subjects did choose the name Bouba for the rounder shape and Kiki for the pointy one. It seems that this attribute is not limited to specific languages or to the form of writing of the nonce word in the different alphabets, but rather that there seems to be a cognitive association between a sharp shape and sound 'Kiki' per se.

However, there were some exceptions. Speakers of Romanian, Turkish and Mandarin did not show the same preference, matching the word bouba with both the pointy and the round shapes equally often. In an interview with Science magazine, Alexandra Ćwiek, a linguistics doctoral researcher who led the research, stated that these results could have been affected by the meaning of these sounds or of similarly sounding words in those three languages. In Romanian, young children refer to bruises or small wounds as “Buba”, and it is possible that the association of the sound with pain attributes a “pointy” shade to it. In Turkish, Gigi, which sounds similar to Kiki, means “cute”, and may thus be phonetically associated with soft things rather than pointy ones. 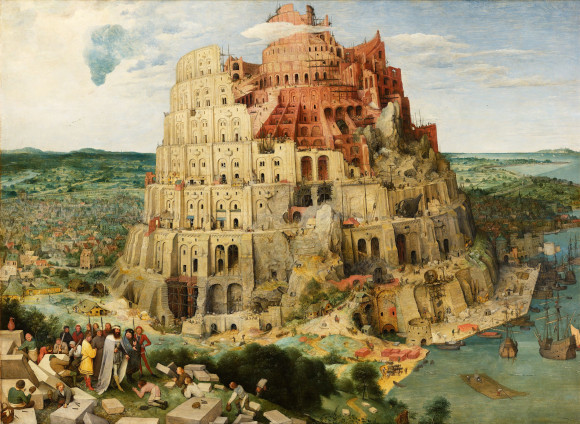 Researchers have asked people from different cultures, who speak different languages, to match the names Bouba and Kiki to the two shapes. The tower of Babel | Image: drawing by Pieter Bruegel the Elder, Wikipedia

How does all of this relate to the evolution of language? The researchers speculate that the first verbal communication may have developed from sounds that had some inner meaning, sounds that automatically associated in the human mind with specific shapes, feelings or concepts - similar to the way that the sounds 'bouba' and 'kiki' associate with pointy or round shapes. “Our ancestors could have used links between speech sounds and visual properties to create some of the first spoken words,” said co-author Dr. Marcus Perlman in a press release, “and today, many thousands of years later, the perceived roundness of the English word ‘balloon’ may not be just a coincidence, after all.”

“New words that are perceived to resemble the object or concept they refer to are more likely to be understood and adopted by a wider community of speakers.” Added his colleague and co-author Dr. Bodo Winter. According to the researchers, many words likely began not as arbitrary sounds, but as intuitive representatives of the concept that they described. These connections can be found in some words even to this day. However, in order to truly understand the elusive connection between sound and shape, future researchers will likely have to extend their tests further, so as to include shapes and sounds other than 'bouba' and 'kiki'.