Al-Khwarizmi - The Genius Who
Invented Algebra
and the Algorithm

Abu Abdullah Muhammad ibn Musa al-Khwarizmi  (ابوعبدالله محمد بن موسی خوارزمی) was born at the end of the eighth century AD in the city of  Khwarazm in Central Asia, which is known today as Khiva, and belongs to Uzbekistan. Hence the name by which he is remembered throughout history, “al-Khwarizmi” - he who comes from Khwarazm. In his seventy years of life he became one of the giants of mathematics. Not only in his region or time, but in the entire history of mathematics.

Al-Khwarizmi was born and lived a short time after the first Muslim rulers finished conquering the vast space between North India, Mesopotamia and the Middle East, through North Africa to most of Spain, all within about 200 years. The city of Baghdad, founded in the eight century, became the capital of this vast empire and was at the time, most likely, the biggest and most developed city outside of China. Baghdad also became the undisputed cultural center of the entire Muslim world, which was no small feat. This was not only due to the immense size of the empire but also due to the cultural wealth it inherited - the lands under Islamic occupation saw the ancient cultures of Babylon and Egypt, and even parts of the ancient Hellenistic world.

In the ninth century, under the rule of the early Abbasid caliphs, the Muslim empire was at its height. Caliph al-Maʾmūn founded in Baghdad the “House of Wisdom” (“Bayt al-Hikm”), which concentrated the immense scholarly enterprise of collecting the ancient sources of knowledge from all around the empire and translating them into Arabic. Among those heights of human thought and intellect were numerous assays written on the subject of mathematics. The importance of al-Maʾmūn’s work is recognized to these days, as many of the surviving Greek mathematical sources have reached us via their translation into Arabic.

Scholars from all over the Muslim world and beyond flocked to the House of Wisdom. Al-Khwarizmi was also among them. This was the place where he spent most of his life, surrounded by the knowledge of the ancients that was now translated into his own language. In the midst of all this intellectual wealth, he broke new grounds in mathematics, ones that no one had thought of treading before him. 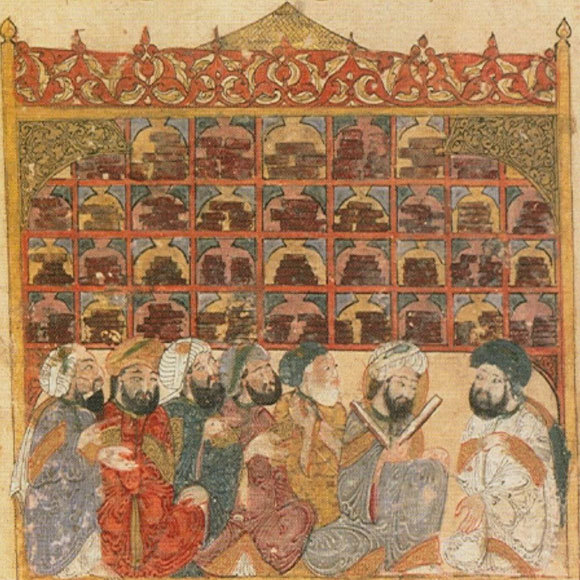 Intellectual richness as a platform for growth. Scholars reading books at the “House of Wisdom”, drawing from the 13th century | Image: Wikipedia, common knowledge

The Father of Algebra

Al-Khwarizmi dealt with arithmetic (number theory), trigonometry, astronomy and many other diverse mathematical fields. However, the pinnacle of his achievements is an exemplary, masterful and ingenious essay thanks to which he is known as the “Father of Algebra”: al-Kitāb al-Mukhtaṣar fī Ḥisāb al-Jabr wal-Muqābalah (The Compendious Book on Calculation by Completion and Balancing). In the introduction to the essay, following the expected words of thanks to the caliph, he explained that this is a useful book that aims at helping in solving problems and making calculations. The ‘completion’ and the ‘balancing’, mentioned in the book’s title, are none other than the simplification of both sides of an equation and the isolation of variables. Al-Khwarizmi was the first to describe them in a general and pragmatic manner.

The book dealt mainly with quadratic functions. For example: “A square and twelve roots are twenty eight numbers”. What does this mean? While the book deals with equations, it is written entirely in words. Al-Khwarizmi was missing the convenient mathematical writing form we use today. While its foundations were present in writings that predated him, it seems that he was not familiar with them, and in any case, the form of writing equations, which we utilize today, was shaped already after his time.

In order to better understand what al-Khwarizmi meant, we will translate his words: a square - our variable squared. “roots” are X’s, the roots of the squares. and the numbers are just numbers. If so, then “A square and twelve roots are twenty eight numbers” is none other than the equation:

What should we do? Al-Khwarizmi explains:

This is the answer.

X=2 is indeed the solution of the equation. Up until al-Khwarizmi’s days such equations could only be solved in certain cases, when things worked out in a particularly convenient way of calculation. Al-Khwarizmi presented a general approach, which will work for any numbers we assign to the equation.

Why is this correct? Al-Khwarizmi not only presented the path to the solution, but also provided it with a spectacular geometric explanation: 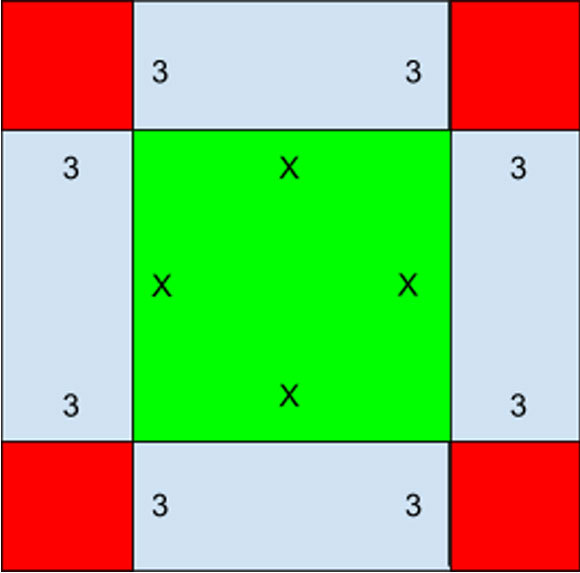 The length of each edge of the green square in the middle is the required X, therefore its area is X2.

The area of each blue rectangle is 3X, and thus their combined area is exactly 12X in our equation. The green and the blue combined equal 28, since we are given that x2+12x=28.

We add the four red squares, the area of each of which equals 9, thus the four combined add up to 36. We get 28+36=64, which is the area of the entire large square.

From this, one can find the length of its edge. If the area is 64, then the edge of the large square should be 8. In order to find X, we have to subtract twice the length of the red square edge, that is, subtract 6 to get 2.

Each step in the set of steps described by Al-Khwarizmi derives from geometrical considerations. 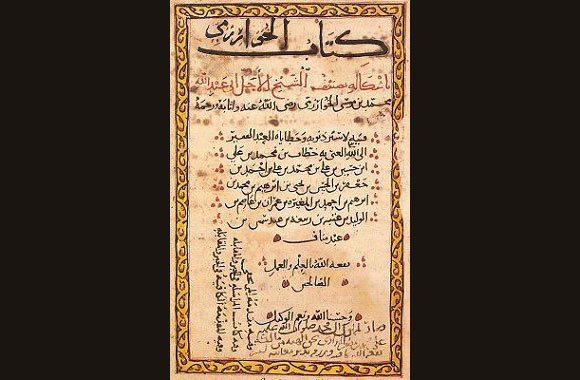 A brilliant essay designed to help with calculations and problem solving. A page from “The Book of Algebra”, or "The Compendious Book on Calculation by Completion and Balancing" - the "al-Kitāb al-Mukhtaṣar fī Hisāb al-Jabr wal-Muqābala" | Image: Wikipedia, common knowledge

From Algebra to Algorithm

It is by no coincidence that the word ‘algorithm’ sounds very similar to the mathematician’s name “al-Khwarizmi”. The word we use today to describe an orderly set of processes that includes steps for the solution of a given problem is nothing but a mispronunciation of al-Khwarizmi’s name, due its problematic transcription into European languages. The consonant KH, which is missing in many European languages, was replaced with a G, and thus, al-Khwarizmi’s name remains present to this day in the name of the mathematical method he developed.

Not only did the algorithm get its name from Al-Khwarizmi’s work. The aforementioned completion and balancing that stood at the heart of his work, al-Jabr wal-Muqābalah, were shortened to al-Jabr and from that to the word ‘Algebra’.

Al-Khwarizmi is considered the father of algebra not only since his essay endowed it with its name, but also in an essential way. The essence of algebra is abstraction. The most important principle in the book is the division into types, and then the ability to say that all things of a particular type are in fact similar. This was unprecedented in the history of mathematics. It was a truly revolutionary step compared to Greek mathematics, which dealt mostly with geometry.

Al-Khwarizmi was the first to refer to general “Algebraic objects”: an equation, a variable and more. Before his time there were only problems and solutions. He already spoke of general types of problems, which he turned into abstract objects themselves, which we study and talk about today, without referring to the private cases given by Al-Khwarizmi. Today we take it almost for granted that this is one of the main things mathematics does. But until al-Khwarizmi it was simply not true. To him, the equation was not simply an excuse to deal with a numerical problem, it was the main objective of mathematical research.

Al-Khwarizmi’s first step was followed by a long line of algebra practitioners, who studied equations further and further, increasing the level of algebraic complexity. Later they set sail to the abstract and built additional mathematical objects, more general and more abstract, which allowed mathematics to soar to new heights. But it all started at the House of Wisdom in Baghdad.