The Author at the
End of the Universe

Science, art, imagination and especially plenty of humor accompanied Douglas Adams’ far-too-short life. Today we celebrate Towel Day as a tribute to him

"Far out in the uncharted backwaters of the unfashionable end of the western spiral arm of the Galaxy lies a small unregarded yellow sun. Orbiting this at a distance of roughly ninety-two million miles is an utterly insignificant little blue green planet whose ape-descended life forms are so amazingly primitive that they still think digital watches are a pretty neat idea”

On this utterly insignificant planet, for 49 encirclements around that small unregarded yellow sun, lived an author who was not insignificant at all. His name was Douglas Adams, and he taught us the most important lesson for anyone who wants to cheaply travel the galaxy: never leave home without a towel.

Adams was born on March 11th, 1952, in Cambridge, England, and exhibited a penchant for writing at a young age. In 1974, after completing a Bachelor’s degree in English literature, comedian Graham Chapman from the Monty Python troupe invited him to write with him. Two sketches on the fourth season of “Monty Python's Flying Circus” were created by this partnership, and thus began the writing career of one of science fiction’s greats.

His career took some time to take off, during which he worked casual jobs, such as a hospital porter, barn builder and chicken shed cleaner. His breakthrough came in 1977, when his radio comedy “The Hitchhiker's Guide to the Galaxy” aired on BBC-4, and Adams himself was appointed producer on the radio channel. 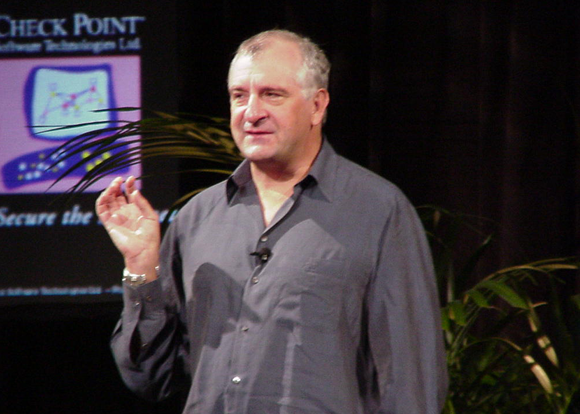 From cleaning chicken sheds to the vast spaces of the galaxy, on the wings of imagination. Adams at a conference in San Francisco in 2000 | Image: Wikipedia, John Johnson

“The Hitchhiker’s Guide” was the highlight of his work. The radio show grew into a book series (“a trilogy in five parts” as he described it), a television series and finally a movie that came out after his death. At the center of the plot is Arthur Dent, the epitome of the bourgeois Englishman whose highest ambition is to have his five o’clock tea at the right temperature, but who finds himself unfortunately frolicking around the galaxy with the neurotic alien Ford Prefect, Marvin the Paranoid Android and the two-headed megalomaniac alien Zaphod Beeblebrox.

All he has in his possession in order to make some sense of the incomprehensible universe around him is a used electronic copy of the Hitchhiker's Guide to the Galaxy - a sort of guidebook for the confused traveler across the galaxy. This is how Adams describes it:

“In many of the more relaxed civilizations on the Outer Eastern Rim of the Galaxy, the Hitchhiker's Guide has already supplanted the great Encyclopedia Galactica as the standard repository of all knowledge and wisdom, for though it has many omissions and contains much that is apocryphal, or at least wildly inaccurate, it scores over the older, more pedestrian work in two important respects. First, it is slightly cheaper; and secondly it has the words DON'T PANIC inscribed in large friendly letters on its cover”.

The Hitchhiker's Guide To The Galaxy book series was first published in 1979 and its fourth book “So Long, and Thanks for All the Fish” was published in 1984. Eight years later they were joined by a fifth book, “Mostly Harmless”, which was more melancholic and less funny. In between, Adams also tried his hand at fantasy, with two Dirk Gently’s Holistic Detective Agency books, in which he ridiculed new age ideas, combining them with time travel, Nordic gods and a subtle seasoning of quantum physics and chaos theory.

Adams’s science fiction took its lack of seriousness very seriously. Unlike classic science fiction writers, who focused on scientific and technological questions, Adams was more interested in the ever growing gap between hard science, especially physics, and the ability of a common person to grasp it. This awkwardness was well expressed by his protagonist Arthur Dent, who, despite possessing an above-average intelligence, is in a constant state of panic in the face of the unexplained universe.

Arthur keeps searching for answers using common sense, which leads him repeatedly to a dead end due to his inability to explain reality. While with Dirk Gently, the quantum physics Schrodinger’s cat paradox is used as proof of the protagonist’s sanity, Arthur has a hard time maintaining his sanity in the face of revelations that conflict with everything he assumed he knew. What would you do if you found out that the Earth is nothing but a giant supercomputer created to find the Answer to the Ultimate Question of Life, the Universe and Everything (the answer, by the way, is 42) and that the dominant creatures in our world are in fact mice? 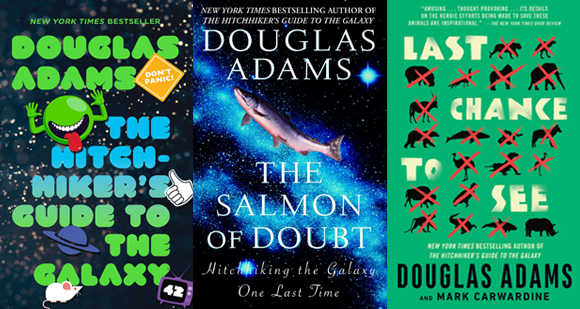 Rational scientific thinking alongside humor and absurd ideas | Last Chance to See, The Salmon of doubt and The Hitchhiker's Guide to the Galaxy

Science and The Absurd

Adams’ works were drenched in criticism and convention-breaking. His self-proclaimed “radical atheism” was also widely present in his works, through his ridicule of mystical thinking and his criticism of the concept of the existence of God. Despite the great absurdity in his books, they expressed great appreciation for rationality and scientific thinking, while acknowledging the limits of human knowledge and its littleness in the face of the big questions posed by the universe. The innovative science in his books is however based on absurdity, such as an improbability-based propulsion method, or advanced calculations that are based on the unique mathematics of waiters’ checkbooks.

The Hitchhiker's Guide books have become a great success worldwide. All the novels of the series have been translated into multiple languages, as were the Dirk Gently books, the nonfiction book “Last Chance to See”, which deals with endangered species, and “The Salmon of Doubt: Hitchhiking the Galaxy One Last Time”, which is a posthumous collection of short stories, unpublished material and unfinished passages and thoughts from Adams’ estate

Adams was also involved in the writing of episodes for the British science-fiction TV programme “Doctor Who”, wrote the computer game “Starship Titanic”, played the guitar and was even invited to accompany the Pink Floyd band on his 42nd birthday. But despite his varied and rich career, he also frequently suffered from writer’s block and was infamous for his inability to meet deadlines.

On May 11th, 2001, at the young age of 49, Adams died of a heart attack after a workout at the gym. Two weeks after his passing, his fans declared May 25th “International Towel Day” as a tribute to his life and work, and it is still celebrated worldwide to this day.

Adams' life was celebrated with a special Google Doodle and he was even honored with an asteroid that was named after him - DA42 2001, which includes his initials, the year of his passing and, naturally, the fateful number 42. When entrepreneur Elon Musk launched his Tesla car into space in 2018, as a dummy cargo in a launch experiment of his new rocket, which was meant to travel to the moon and to Mars, the words ‘DON’T PANIC!’ flashed on the vehicle’s dashboard and a towel was placed in the glove compartment - a fitting gesture to Adams. In Israel, a veteran online science-fiction magazine ‘Don’t Panic’ (Bli Panika), edited by yours truly, was named in tribute to him.

So Long Douglas, and thanks for all the books.