How to Make Exploding Bags of Water

With materials found in any house, you can turn a regular bag into a “bomb” with a time-release mechanism

In this experiment, we’ll make a self-inflating and self-exploding bag – due to a chemical reaction between two ingredients.

Watch the experiment in this video:

Technically, the trickiest part of this experiment is making the inner bag filled with water explode. Here are a few tips to help you succeed:

It’s important to close the water bag tight, leaving no air inside.

It’s important to cut the loose end of the bag as closely as possible to the knot.

We recommend not to tie the bag too tight, so that even a bit of pressure on it can open the knot without making the bag tear.

It’s important to tie the outer bag with no air at all inside, so you can press on it more easily.

To avoid material waste, we recommend first trying to explode a bag with water inside another bag – but without the other ingredients. Once you succeed with this, continue with the experiment.

If you still don’t manage, instead of the inside bag, just use a plastic cup with water, but be careful. When you want to blow up the bag, just turn over the cup and shake.

When we fill a bag with air, tie it, and then press hard on it with our hands – it explodes. This happens because when we are applying pressure on the bag, we are compressing it (scientifically: “reducing its volume”). As a result, the pressure of the gas (the air) inside grows, and the gas presses more and more on the bag’s sides, until the bag can’t take it anymore, tearing up and exploding.

This experiment also features a bag exploding because of gas pressure, but it’s not created by physically applying pressure with our hands, but rather, from a chemical reaction. The reaction leads to more and more gas building up inside the bag, which, in turn, increases the pressure inside the bag – until it explodes. 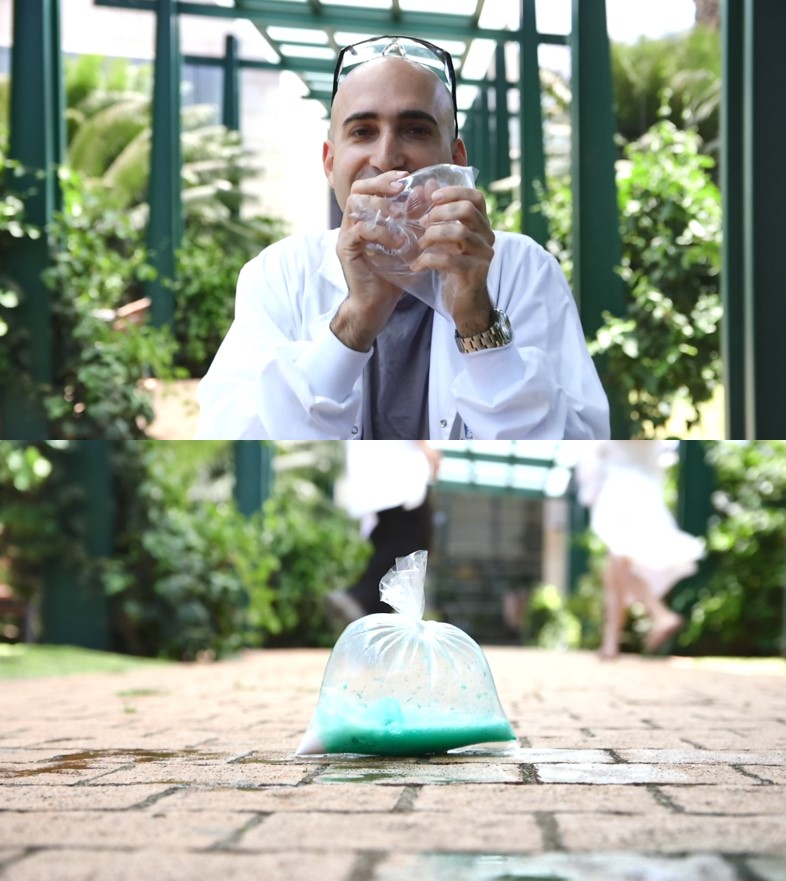 Inflated bags just before exploding due to gas pressure – when you compress a bag (above) and when gas is created in a chemical reaction (below). Photos from the Science at Home video, Photo: Roi Hovani

The build-up of gas pressure to detonate the explosions in the experiment is the same mechanism used in bombs, weapons, and other real-life explosions. The difference is that in weapons, the pressures are much higher than in our experiment – and, as a consequence, the explosion’s power is greater.

A chemical reaction that produces gas

This experiment demonstrated a chemical reaction between two ingredients that created gas, which then inflated the bag. The two ingredients were baking soda and citric acid, and the gas that was created is called carbon dioxide (CO2). Generally speaking, baking soda (or, as it is termed scientifically: “sodium bicarbonate” or “sodium hydrogen carbonate”) belongs to a family of materials called “carbonates,” because they are composed of a chemical group of carbon and oxygen atoms, called carbonates. Citric acid (which can be found in lemons) belongs to a group of materials called “acids.” An interesting property of citric acid is that at room temperature, it is a solid and looks like salt grains.

Acids and bases react with each other in a rapid chemical reaction, resulting in the neutralization of the properties of both. “Carbonate” bases have another special property: They create carbon dioxide gas during the reaction with acids. Many home experiments are based on this principle, like the Foam Volcano or Inflating a Balloon with Chemical Power experiments, in which the acid is vinegar, which is a liquid.

In our exploding bag experiment, the citric acid is a solid, just like the baking soda. The problem is that solids don’t really react with each other. One of the prerequisites for a chemical reaction is that the ingredients’ small particles move from their original positions and meet one another. The constituent particles of solids, however, do not move. They are strongly attached to each other.

This is what enables us to create the detonating mechanism for the exploding bag, in effect – to time the explosion. As long as the ingredients remain as dry powders, they don’t react with one another. Only when we wet them with water do they dissolve, and then their particles can move and react with each other, creating the gas that leads to the bag’s explosion. In general, you can summarize the chemical reaction as:

For those interested, here are the details of the chemical reaction in this experiment.

Baking soda’s chemical formula is NaHCO3, citric acid’s is C6H8O7 and its molecular structure is:

(aq is short for aqua – dissolved in water; l is liquid; g is gas.)

Thanks to the teacher Rachel Gati for the idea for this experiment.