Build Your Own Love Meter

The liquid rises as we think about someone we love

In this experiment, we will build a sort of “love meter” that reacts to the touch of your hands, and understand how it works.

·   A drinking straw (the more transparent the better)

Watch the experiment in the following video:

Here’s a tip to help your experiment succeed: Make sure the bottle is tightly sealed – otherwise, the experiment won’t work. Check this by trying to blow gently through the straw: If there are many bubbles in the bottle, it’s not completely sealed. If it is sealed properly, you may still see a few bubbles, but you will not be able to blow into the bottle.

Does it really measure love?

Our love meter, just like the ones you can find in stores, does not really measure love (sadly – it’s just not that simple). It is actually more like a type of heat thermometer, which measures the warmth of the hands of the person holding the device, or reacts to changes in temperature.

In our love meter, briefly touching the bottle causes the water to rise through the straw. As the bottle cools, the water falls back down. But is it the water that is reacting to the heat and cold? Note that there is no need at all to warm up the water in the bottom of the bottle, or even touch this area, to make the water rise – and that’s because what is “reacting” to the temperature changes in the love meter is the air inside the bottle. The water is simply being pushed up through the straw, serving as a measuring tool for us.

But how does the air “react” to the heat and cold? In order to understand that, first, we need to know what air is made of.

We can’t see molecules and atoms with our eyes – and certainly can’t see them move. What we do see is the effect of their movement. The moving air particles collide every second with whatever is in their way. The collisions cause the gas to push and shove everything in their way – including other particles and the sides of the bottle. This effect is called pressure (or air pressure). Pressure caused by particles in the air colliding with the walls of the material that makes up a balloon is what keeps it inflated.

Increasing the temperature increases the speed of the gas particles, which, in turn, increases the pressure of the gas – and vice versa. This relationship between the pressure of a gas and its temperature is also known as Gay-Lussac's Law, after the French scientist who discovered it. Joseph Gay-Lussac (1778-1850) spent much of his time studying gases and the atmosphere, and was one of the first humans to fly in a hot air balloon – for research purposes.

If the bottle was left open, warming it up would simply make the air that is under greater pressure inside the bottle escape. But as we’ve applied plasticine to properly seal the bottle and keep the straw in place, the air cannot escape and it will start putting pressure on everything that comes into contact with it – the bottle walls, the plasticine seal, the straw, and the water. As the water is the “weakest link”, i.e. the softest and most fluid material with which the air is in contact, it is pushed up through the straw up to a certain level. 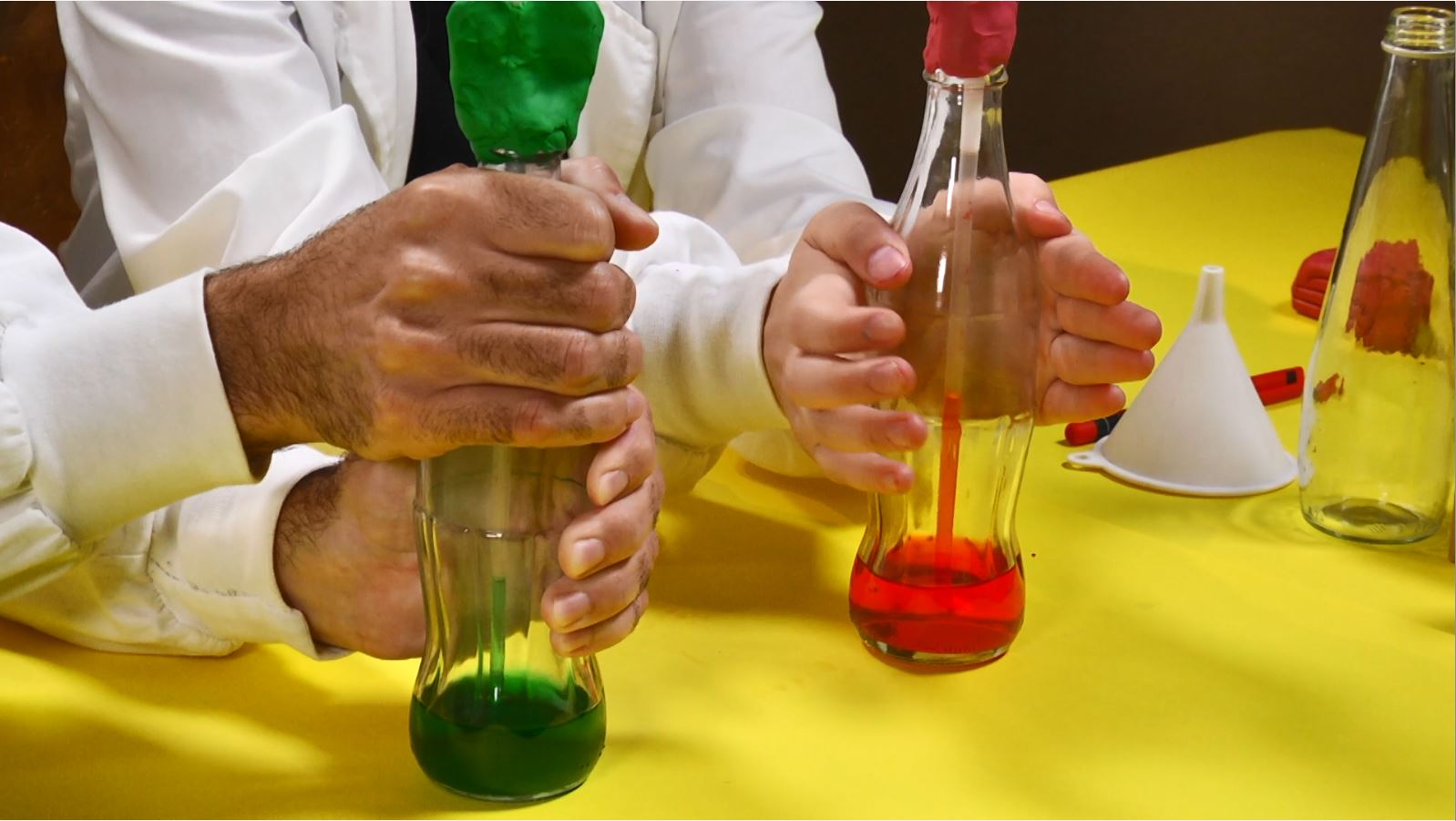 The colored water rises up the straw in our “love meter.” Screenshot from the Science at Home video

But how does the water “know” when to stop?

The answer is that the water rises through the straw until up to a height in which there is equal pressure from both directions. As it fills the straw, the water’s own weight also creates pressure in the opposite direction. The water will stop rising once the pressure of the water “column” is equal to the air pressure inside the bottle, which is determined by its temperature.

To be more precise: Pushing the water up through the straw also increases the available volume of air inside the bottle, thus reducing its pressure (there are other "gas laws" which state that as the volume of gas increases, its pressure decreases). This contributes to ending the water’s rise within the straw.