The Nature of Radiation
in Household Appliances

Before trusting warnings against the radiation emitted by cell phones or other radiation types, it would be wise to understand what type of radiation is active in each case, and what it can actually do

How many times have you heard that the radiation emitted by cellular phones is harmful, and that radiation emitted by antennae is even worse, that microwave ovens are dangerous and that you should stay away from the transformer in the laptop charger? Probably dozens of times at least. In practice a large part of these warnings are exaggerated at best, and based on scientific misunderstandings at worst.

In order to understand whether these concerns have merit, and if so - when, you will need to understand that there are many types of radiation in the universe, and that the one relevant to our discussion is electromagnetic radiation. It is a very common and varied type of radiation, which includes visible light, radio waves, X-rays and more. The commonality between these radiation types is that they are all periodic fluctuations in the intensity of electric and magnetic fields. In a nutshell, you can say that these fields describe the strength of the electric and magnetic forces that are applied to each point in a space, in case of the presence of an object that could be affected by them.

The fluctuations in strength can be described as a wave that propagates in space, rising and falling at any point. Similar to any wave, radiation has a wavelength - the distance between two adjacent peaks, and it also has a frequency - the number of rises and falls, or cycles, that radiation makes at a certain point in a unit of time (usually a second). The product of these two parameters is constant, and is equal to the speed at which the wave propagates in space: the speed of light. From this we can deduce that the longer the wavelength, the smaller the frequency, and vice versa.

These properties are important for our discussion since they indicate the amount of energy characteristic of the type of radiation in question - short wavelength and high frequency indicate high energy, long wavelength and low frequency indicate low energy. This is important, since the energy that radiation carries dictates how it will affect objects in its path. This effect, in turn, dictates whether there are conditions under which a certain type of radiation may be harmful to us. 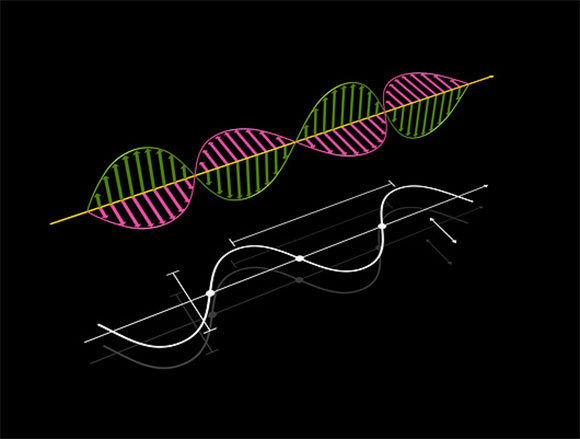 Radiation has a wavelength - the distance between two adjacent peaks, and also a frequency - the number of cycles at a given point within a unit of time. Illustration of electromagnetic waves | Carlos Clarivan, Science Photo Library

When we divide electromagnetic radiation into types, according to the energy it carries, radio waves are found at the lower end of the spectrum. The last time you turned the dials on a radio to a certain FM station, you have probably noticed that the stations are numbered between 80 to about 120. This number represents the wave frequency in megahertz, meaning millions of cycles per second. This is a small sector of the full radio wavelength range, which ranges in frequency between 3,000 hertz (Hz) and 300 megahertz (MHz).

Next we will find microwaves, with frequencies between 300 megahertz and 300 gigahertz (300 billion hertz). Here we will find the radiation that heats our food in the microwave oven and also the radiation emitted by an internet router that allows for wireless surfing - 2.4 gigahertz or 5 gigahertz.

If we go one step further, reaching the 300 gigahertz to 400 terahertz (400 trillion hertz) frequency range we will find infrared radiation. We use this radiation in remote controls of electronic devices, among other uses. After that comes the visible light, so named since it is the range of electromagnetic radiation that our eyes can detect, between 400 terahertz (red light) and 790 terahertz (purple). Another step up will take us to ultraviolet radiation, followed by X-rays and finally gamma rays that carry the largest amount of energy. 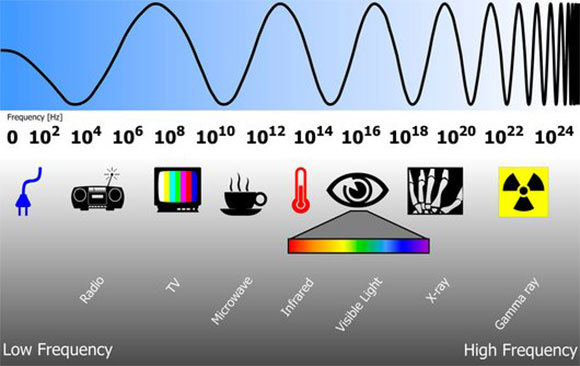 In order to understand how all of this relates to the concerns regarding radiation we have to make a distinction between two types of radiation, which differ by the amount of energy they carry. Ionizing radiation is radiation that holds enough energy to rip an electron off an atom or a molecule, meaning to turn them into ions - particles with an electric charge. Removal of an electron can change the structure of a molecule and also affect its function. When a sufficiently large amount of energy hits the DNA molecules in our bodies, it can also induce mutations that may lead to cancer and additional harmful outcomes.

The International Agency for Research on Cancer (IARC) has classified ionizing radiation in group 1 of cancer risk factors, which includes substances and exposure circumstances that are carcinogenic - have the capacity to cause cancer in humans. This group also includes alcoholic beverages and processed meat, although the classification only indicates that the risk exists, with no reference to the degree of risk, which, in the case of ionizing radiation, increases with the amount of energy.

In contrast, non-ionizing radiation is a type of radiation that does not carry enough energy to ionize atoms or molecules and thus affect the structure of matter. Its main effect is expressed by its ability to heat the object it reaches, such as in the case of food heated in a microwave oven, or in the way by which sunlight warms the earth. The IARC has classified non-ionizing radiation in group 2B, which includes substances and exposure circumstances that are suspected as potential carcinogens although there is no good evidence for this in either humans or laboratory animals. Asian-style pickled vegetables and aloe vera leaf extract are also included in this group.

The exact boundary between ionizing and non-ionizing radiation depends on the definition, but in any case, it is found somewhere within the frequency range of ultraviolet radiation. Since all of the radiation that we encounter in electric home appliances and devices, such as cell phones, radios and microwave ovens, is non-ionizing, it presents no danger for our cells and there is no reason to expect them to lead to the development of a cancerous process. 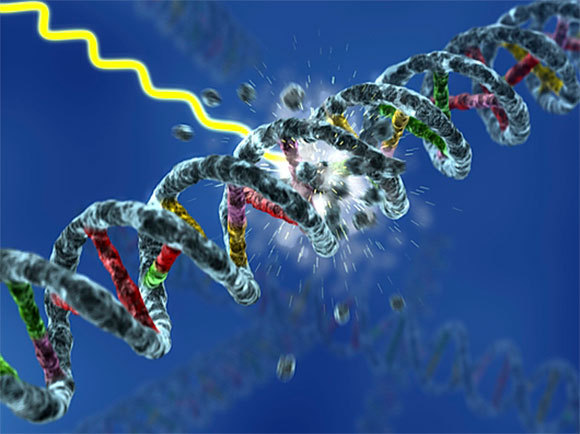 When a sufficiently large amount of ionizing radiation hits a DNA molecule in our body, it can induce mutations. Illustration of damage done to genetic material |  Equinox Graphics, Science Photo Library

Let’s name some figures. A wireless internet router emits microwaves at frequencies of 2.4 or 5 billion hertz; Cell phones emit microwaves in the range of a few hundreds of millions Hertz to a few billion Hertz, and are harmless even in elevators; Solar panels, electric vehicles and induction stoves emit radiation in the radio frequencies range.

An article that was published two years ago concluded that there is no link between cell phone usage and tumor development, following a survey of numerous studies that have examined this matter. The U.S. Food and Drug Administration (FDA) has also reviewed studies on radio waves emitted by cell phones and according to their survey there is no evidence that this radiation could cause health problems.

According to the U.S. Center for Disease Control and Prevention (CDC), non-ionizing radiation is not dangerous in itself. Exposure to large amounts of this radiation can cause overheating, but there is no real concern for that in a home environment. The exception to this is ultraviolet radiation. Parts of this type of radiation are, as previously stated, categorized as ionizing radiation, and are therefore potentially dangerous, but even non-ionizing ultraviolet radiation can be harmful. Short exposure to this radiation, up to 15 minutes two or three times a week, helps our body produce vitamin D. However, at higher exposure, as in the case of long stays under the afternoon sun or the use of tanning beds, it can cause skin burns, damage eyesight and even cause cancer. 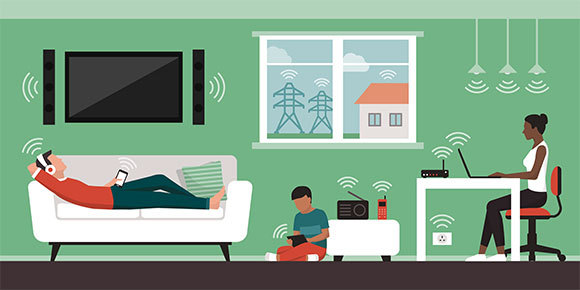 All of the radiation that reaches us from electric household appliances is non-ionizing. Illustration of different radiation sources in a household | Shutterstock, elenabsl

Why then do health authorities still set limitations on radiation emission by electric household appliances? The answer lies in the precautionary principle, which states that it is preferable to exercise caution when using tools that we are not entirely certain are harmless, even if we are not familiar with any mechanism by which they could be harmful.

For example, when cellular telephones came into mass use over twenty years ago, it was not known for certain whether the radiation they emit could adversely affect our health. While there was no known mechanism by which the microwaves emitted by cell phones could be harmful, the possibility of the existence of such a mechanism, still remaining to be discovered, could not be ruled out. Thus, it is better to practice caution until the situation becomes clearer, so as not to regret it later. Numerous studies conducted over the years found no link between cell phone use and morbidity, and thus it can now be stated with almost complete certainty that they are safe, except for the possibility that they may cause a very long-term damage, in the range of decades - since this technology has not been in existence for that long. 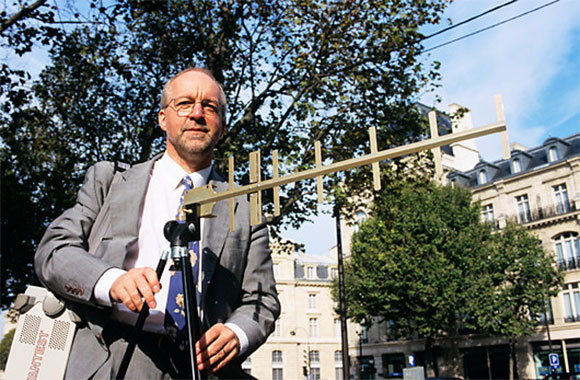 Numerous studies conducted over the years have found no link between cell phone use and increased morbidity. A scientist measuring electromagnetic radiation emitted from a cellular phone antenna |  Philippe Psaila, Science Photo Library

In order to verify that the radiation emitted by home appliances is indeed harmless, many countries have set standards for the approved radiation frequencies that are emitted by electric appliances and their capacities. In this manner they limit the amount of energy in such appliances and the extent of heat they can produce, respectively .

Radiation standards recommended by the World Health Organization (WHO) have strict limits for the type of radiation and the suggested exposure time.

Radiation standards in Israel are based on recommendations by the World Health Organization (WHO), but are more stringent, depending on the type of radiation and the estimated exposure time. For example, when it comes to radio waves in public spaces, where the duration of human exposure to radiation time is relatively short, the maximum approved radiation intensity in Israel is roughly 30 percent of the danger threshold level set by the WHO, in accordance with the precautionary principle. In workplaces or in a home environment, where people are exposed to radiation for longer time periods, the standard in Israel is 10 percent of the accepted international threshold. The Israeli standard for exposure to radiation from an electric grid is 1/250 of that recommended by the WHO. And thus, even for non-ionizing radiation, which is not considered dangerous, the Israeli standard is very strict and does not allow us to be exposed to strong radiation.