Despite concerns about its health risks, no evidence currently justifies the fear of the fifth generation of cellular phones

The fifth-generation cellular network, or 5G, is a digital cellular network that relies on a new technology, due to become operational in Israel and the rest of the world in the near future. Recent reviews explain that 5G will provide information to more users at any given time, enable faster data transfer speed, and shorten network latency in data transfer. But some of the articles also warn against possible harmful health effects. Is the new network indeed dangerous?

Cellular networks in a nutshell

A cellular radio network enables cellular phones to receive and transmit radio waves. Cellular phones do not communicate with one another directly, but through a widespread network of antennas. Each antenna can transmit and receive signals, or conduct other kinds of communication, with cellular devices in a small area around it. This area is termed a “cell;” hence, cellular networks.

In a nutshell, cellular phones transmit data to an antenna in range, and the antenna transmits the data to the network’s main router. In turn, the router transfers the data through the landline telephone network to the appropriate destination, or, if the destination is another cellular device, to the antenna through which it receives. When we’re on the move while being connected to the cellular network, travelling from one cell to another, the cellular network can transfer the communication to the next cell we have entered. It does this by switching to the appropriate communication frequency, as adjacent cells use different frequencies to avoid communication disruptions.

Network latency is the time it takes for information to travel from one end of the communication line to the other, or from our cellular phone to the phone of the person we are communicating with. Latency is measured in milliseconds (thousandths of a second), and in the new 5G network, the latency target is a few milliseconds – a 5-10-fold improvement over the fourth generation.

The radio waves used by the new network are characterized by a higher frequency (the number of occurrences per second) than existing networks, and can reach up to 28 gigahertz. Higher frequencies enable the transfer of more data, but could also cause certain disruptions in communications, for example, when the user is inside a building made of concrete. Higher frequencies limit communication to shorter distances (hundreds of meters) compared with existing network radio waves, which utilize lower frequencies that enable communication up to several kilometers. The explanation here is that as the higher the frequency, the higher the absorption and dispersion (attenuation) of the radiation, thus the carried signal fades as the distance increases. Therefore, the 5G network requires a wider distribution of cellular antennas, with smaller and denser cells.

The needed addition of antennas and the transition to higher frequencies has ignited concerns regarding potential health dangers to the users. However, the evidence indicates that there is no foundation for these concerns.

First, it should be understood that radiation is the emission of energy from any type of source. Body heat is radiation, as is the light reaching our eyes. Radiation is usually classified into two types, based on its frequency: Ionizing radiation and non-ionizing radiation. Only ionizing radiation has the sufficient energy to ionize atoms or molecules – that is, completely remove an electron from an atom or a molecule – which poses a potential health risk, as it could prompt changes in our DNA, which, in turn, may cause diseases such as cancer.

Cellular phones – including fifth-generation devices – use the second type, non-ionizing radiation. This type of radiation does not have enough energy to detach electrons from atoms, therefore its only effect on our bodies is heat, similarly to the action of a microwave – only much weaker.

And yet concerns with regards to the negative effects of the fifth-generation network technology on our health rise time and again. These claims are partly false and partly exaggerated or baseless.

The claim in brief: The amount of radiation increases with the number of antennas, and fifth-generation technology requires a denser network of antennas.

The facts: The claim is baseless. Israel’s Ministry of Communications states that because 5G technology facilitates a faster, more efficient data transfer, exposure to radiation will actually decrease significantly.

Furthermore, increasing the number of antennas in the public space will decrease the size of each antenna’s cell, thus reducing the distance from the antenna to the phone, and leading to the emission of lower-energy radiation. Because the intensity of the radiation to which we are exposed is very much dependent on the distance from the object emitting the radiation, the primary concern relates to the radiation emitted by the cellular devices themselves – which we tend to carry on our bodies – and not from the distant antenna. 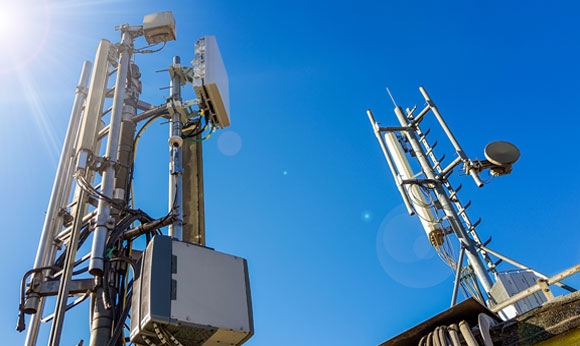 No need to be concerned about the distant antenna. Cellular antennas. Shutterstock

The claim in brief: There is a correlation between exposure to radio waves and cancer, even though it is not an ionizing radiation.

The facts: the correlation between exposure to radiation and cancer is controversial. The American Food and Drug Administration (FDA) states that most of the studies conducted have not shown that non-ionizing radiation is hazardous to our health in any form, and studies that attempted to reproduce the results of research that did show damage, failed to do so. Additionally, new studies show that the human skin protects our bodies from absorbing this energy.

The FDA notes the sweeping agreement over the need to conduct additional studies about the long-term effects of non-ionizing radiation, since it is a relatively new technology whose continuous effects over periods of years and more are not known yet. For this reason, regulations and safety limitations for cellular communication have been instated, with the purpose of protecting the public from exposure to high levels of non-ionizing radiation.

Claim 3: The World Health Organization (WHO) claims that radio waves cause cancer

The claim in brief: The WHO itself has classified radio waves as a possible carcinogenic (cancer-causing) agent to humans.

Non-ionizing radiation belongs to group 2B – possibly carcinogenic to humans, along with talcum and coffee. Any material that has been shown, by research of any kind, to have some form of connection to cancer, goes into Group 2. The IARC itself even states that there is no clear connection between non-ionizing radiation and cancer, only limited evidence. And as previously stated, studies which tried to reproduce this, failed.

It is sometimes difficult to infer from the results of research to humans. For instance, a study conducted on mice found a correlation between non-ionizing radiation and cancer, in frequencies used by second- and third-generation cellular networks. The study used intensities and exposure times much higher than the maximal ones used by humans on their cellular phones, so that the results do not inform us very much of the dangers of exposure to cellular radiation in reality.

Thus it seems that there is no clear evidence on which to base the claim that non-ionizing radiation is dangerous to the public. Since the technology behind the fifth-generation cellular networks is still new, more studies are required to decipher its long-term effects on public health. If you are still concerned, apply the principle of preventative caution and minimize your exposure to cellular radiation – for example, don’t go to sleep with your cellular phone on the nightstand next to your head. This also promotes better sleeping habits, and may contribute to better sleep.