If we break down our bodies all the way down to the atoms it’s made of, what would they be worth? What are these elements, and why some are more prevalent in our body than others?

The human body is composed of a huge variety of molecules, but all of these are combinations of a few dozens of building blocks: The chemical elements of the periodic table. Yet the abundance of each atom is far from being similar. What is the percentage of each of the elements that comprise our body?

To answer this question, we first need to estimate the total number of atoms in our body, then determine the ratio of each chemical element in them. The body of an adult male weighing 70 kg is composed of some 6.71X1027 atoms (i.e., 6,700 trillion trillions), divided among 60 elements of the periodic table’s 118.

The human body is made mostly of water (a molecule composed of two hydrogen and one oxygen atom) and of “organic” molecules, which consist of a skeleton of carbon atoms bound to other elements. The organic molecules include mainly proteins (mostly carbon, hydrogen, oxygen, and nitrogen, but also sulfur and selenium), carbohydrates (mostly carbon, oxygen, and hydrogen), fats (as above), and nucleic acids (carbon, hydrogen, nitrogen, oxygen, and phosphorus). It is thus no wonder that 99% of the atoms in the human body come from six elements: Hydrogen (62.9%), oxygen (almost 24%), carbon (nearly 12%), nitrogen (nearly 0.6%), calcium (0.24%) and phosphorus (0.14%).

Calcium is on the list as it is essential for our skeleton, which contains 99% of the calcium in our body. It is also important for muscle movement, communication between cells, and the activity of certain proteins. Phosphorus is on the list because it is vital for building the skeleton and teeth. It’s important also for creating energy in the cell, the DNA structure, and the proper function of certain enzymes – proteins that have many roles inside and outside the cells.

Another 0.18% are comprised of elements that are essential for life, such as sulphur, sodium, potassium, chlorine, and magnesium. The remaining elements required are called microminerals because they exist in our bodies in minute amounts. They include silicone, fluoride, iron, zinc, copper, lithium, manganese, iodine, cobalt, chromium, selenium, and molybdenum.

The rest of the elements in our bodies apparently do not have vital roles, and it seems they’re in our body due to their abundance in nature. Thus, for example, there is more strontium, rubidium, bromine, and aluminum in our bodies than iodine is, even though iodine is essential for thyroid activity and the others fill no significant role. 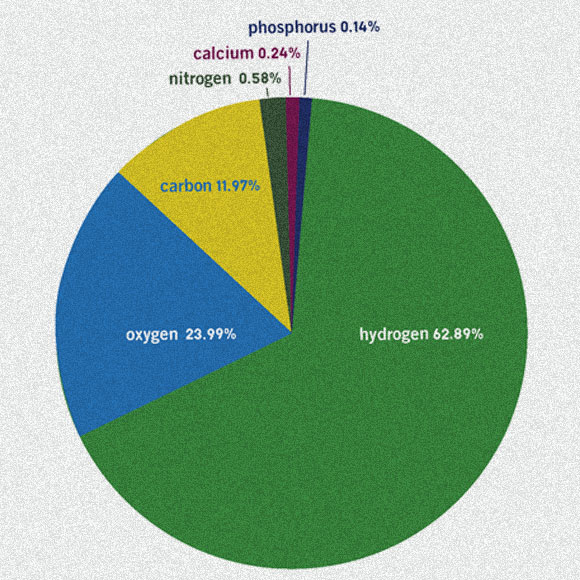 The amounts of the main elements in the human body (another 0.18% are not shown in the graph) Illustration: Amit Shraga, Maria Gorochovsky

If we were to extract the elements from the human body after death, they would have a certain financial value – but not a very high one. In 1924, the American doctor Charles Mayo estimated the value of the atoms in the human body to be then worth about 84 cents. The six common elements were exceptionally cheap, as they are abundant in nature and relatively easy to obtain, but some elements in our body, such as gold, are rare and have a higher price tag.

If we calculate the total financial worth of all the elements in our body according to their current value, the result would be just under $200. The larger part of this sum reflects the share of potassium atoms, which alone are worth $142. Potassium adds up to 0.03% of all the atoms in our body, i.e., approximately 142 grams in the body of an adult; potassium’s price on the market is about $1,000 per kilogram.

But the division to atoms alone is misleading, since the cost of certain molecules in the human body is much higher than all the atoms that compose it. The financial value is more than double when considering the living human body, and not just the collection of molecules or atoms it is composed of. As inventor Thomas Alva Edison once noted, “From his neck down a man is worth a couple of dollars a day, from his neck up he is worth anything that his brain can produce.”

So what is a human made of?  The Steeleye Span song “The Making of a Man” offers a poetic, albeit less-than-exact recipe:

Iron enough to make a nail,

Lime enough to paint a wall,

Water enough to drown a dog,

Sulphur enough to stop the fleas,

Potash enough to wash a shirt,

Gold enough to buy a bean,

Silver enough to coat a pin,

Lead enough to ballast a bird,

Phosphor enough to light the town,

Poison enough to kill a cow,

But that just isn't enough to make you a man

A man has strength enough to build a home

And time enough to hold a child

And love enough to break a heart