Carbon is the building block of life and has a central role in many processes on our planet: Carbon compounds help regulate temperatures around the globe and are components of the food we eat and the fuel we consume in industry, transportation, and electricity. Most of Earth’s carbon is stored in rocks and ocean-floor sediments, and the rest is found in the oceans’ water, the atmosphere, and the organic compounds that make up all living creatures. It flows from one reservoir to another through a range of mechanisms, which together, create the carbon cycle.

The following video clip describes the carbon cycle on planet Earth, the changes in that cycle due to human activity (which can cause climate change), as well as the oceans’ vital role as carbon sinks and as a stabilizing influence on global climate.

Plants, algae, and specific types of bacteria absorb carbon dioxide from the atmosphere or from the oceans, and fix carbon into sugars through the photosynthesis process to fix carbon in sugars. When animals eat the plants or algae, this carbon then moves through the food chain. Carbon dioxide is expelled from animals, plants, algae, and bacteria during their respiration processes.

When plants, animals and other organisms die, the carbon compounds their tissues contain remain intact. These carbon compounds serve as food sources for soil bacteria and other unicellular organisms in the decomposition process, which results in the emitting of carbon dioxide and methane (a carbon atom connected to four hydrogen atoms, another greenhouse gas), into the soil and the atmosphere. Often, the remains of living organisms are deposited in the earth or drift to the seafloor, out of the reach of unicellular organisms to break them down. Over hundreds of millions of years, the bottom layers of the decaying organic matter are compressed by the increasing pressure bearing down on them. Most of the once-living tissue is destroyed, but carbon persists, and, together with hydrogen atoms, it forms long chains called hydrocarbons. Hydrocarbons are the primary constituent of fossil fuels, such as crude oil and coal.

Humans’ use of fossil fuels in industry, transportation, and to generate electricity. This gives rise to carbon dioxide, which is released into the atmosphere. Carbon dioxide in the atmosphere then dissolves into the ocean water and is absorbed by plants through photosynthesis; and so the carbon cycle continues. 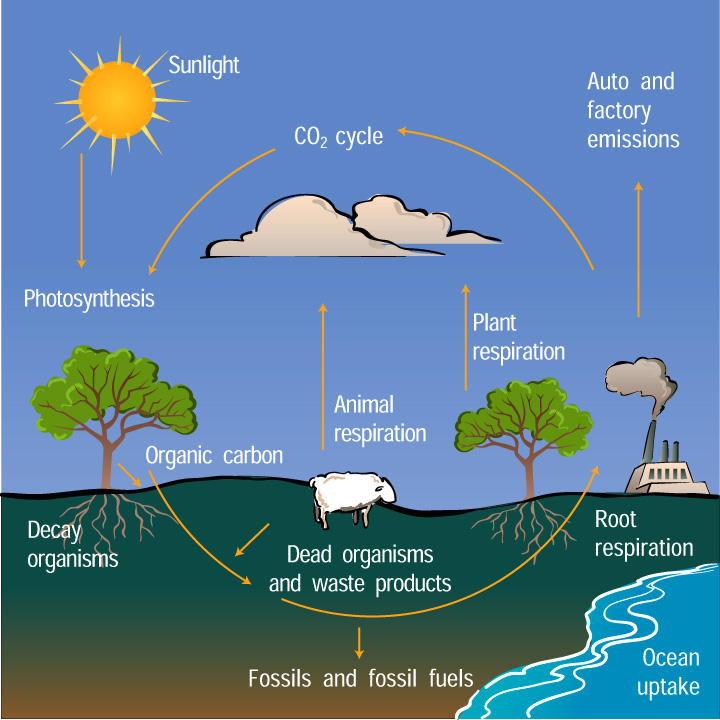 Diagram from the website of The National Center for Atmospheric Research

Note for Surfers:
If you think that the explanation is not clear enough, or if you have any questions on this subject, please send your comments to the forum and we will respond. Suggestions for improvements and constructive criticism are always welcome.