On Garlic, Magnets
and The Scientific Revolution

For over 1,500 years, scholars believed in a fact that any child could disprove with a simple test. Two approaches developed in the 16th century changed the situation

Although this idea may seem strange to us today, until a few hundred years ago it was considered an undisputed fact. This was the case, at least from the flourishing period of the Roman Empire and up until the beginning of modern science. For hundreds of years, it was common practice to forbid sailors from eating garlic while sailing at sea due to fear that the garlic fumes could disrupt the ship’s magnetic compasses and mislead its navigation.

If this doesn’t seem strange enough to you, it may interest you to know that a creative solution was found over the years for this imaginary problem: people believed that the negative effect of garlic could be canceled by pouring the blood of a goat on the magnet. Where did these ideas come from? Why were they considered true for so long? And above all, what can be learned from this about the difference between science in modern times and the study of reality in earlier times?

To Err is Human

Many readers are probably asking themselves, “But wait - why didn’t they check this? It’s so simple.” Indeed, if you take a garlic clove and try to use it to disrupt the action of the magnet, you will most likely discover, to the dismay of the ancient and medieval naturalists, that garlic has no effect on the magnet’s power of attraction. At most, the magnet will be covered in an oily layer and will smell strongly of… well, garlic. How could a fact that is so easy to test and debunk have been considered true for so many years?

First, we must understand the origin of the idea of the garlic effect. The most widely accepted explanation is that it is a spelling error that has been preserved over many generations in manuscripts copied by hand. The origin should probably be sought in Rome, with the first-century naturalist Gaius Plinius Secundus (Pliny the Elder), who wrote one of the most comprehensive encyclopedias of ancient times, “Natural History”. In his 20th book, Pliny wrote, “The magnet attracts iron and another (stone) drives it away from it.” By “another stone,” Pliny was probably referring to minerals that were considered by the scholars of his time to have a repulsive magnetic force.

Now comes the intriguing part. Pliny wrote his books in Greek, in which the spelling for the words “another” (alio) and “garlic” (allio) are nearly the same. In those days, before the invention of printing, books were copied by hand, so copying errors were common. It seems this mistake occurred in many copies and the error became ingrained. Indeed, one can find old copies of “Natural History” sold today in which it says “another stone.”

The road from this point to making the garlic effect an indisputable fact was short. The Roman philosopher and historian Plutarch, who was born a generation after Pliny, already referred to the garlic effect as a fait accompli. In his treatise “Quaestiones Convivales”, he wrote: “a loadstone will not draw a piece of iron that is rubbed with garlic. Now all these, as to matter of fact, are very evident..”

It is rather surprising to find out that Plutarch wrote that the fact was verified. If his words are true, it would mean that someone has tested the issue and reached this baseless conclusion based on some personal experience. Did Plutarch lie to his readers or did he honestly believe that garlic disrupts the action of a magnet? Since almost two thousand years have passed since Plutarch’s time, the answer is unknown, but his words seem to illustrate that sometimes you don’t need to see in order to believe, but rather to believe in order to see. 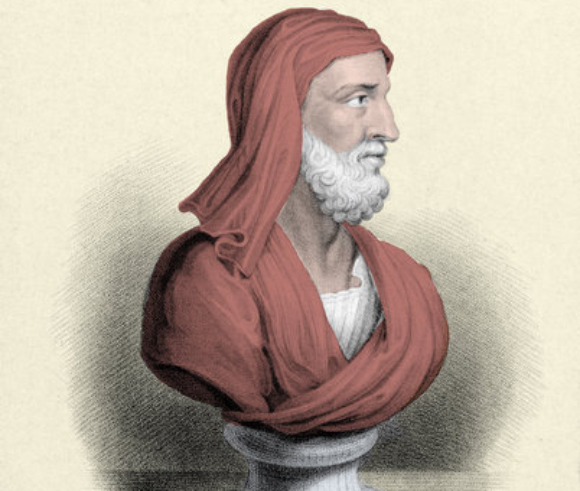 Over the years, the belief in the effect of garlic became widespread and ingrained. In the 2nd century AD, the famous astronomer Ptolemy wrote in his work “Tetrabiblos” (Four Books) that “..if garlic be rubbed on the magnet, iron will experience no attraction..” In most of the ancient sources, the garlic effect is presented as an example to illustrate the principle of sympathy-antipathy, which states some substances have powers opposite to those of other substances, and these forces cancel each other out. The magnet and garlic duo became one of the accepted examples used to illustrate this principle.

The garlic effect continued to appear in many other writings throughout the centuries. In an treatise on alchemy from the seventh century, the unknown author claims, for example, that “It is not for the man to ignore that because of natural sympathies, magnetic stones attract iron to them, or that because of antipathies, garlic spread on the magnet nullifies the natural attraction of the magnet.”

And it continues: In the tenth century, in a comprehensive collection of writings on the subject of agriculture, called “Geoponica”, it says that garlic not only deprives a magnet of its power of attraction, but also causes it to repel iron. It was also claimed there that immersing the magnet in a bowl filled with goat’s blood would cancel the effect of garlic - an addition that likely also originated from a creative interpretation of Pliny’s writings.

In the 13th century, the garlic effect also appeared in scientific texts from the Muslim world, which adopted many ideas that originated in ancient Greek and Roman cultures. However, there are several testimonies from medieval scholars who actually tested the garlic effect on magnets on their own and found the claim to be incorrect. Yet, they refrained from dismissing the existence of the garlic effect, and only cautiously claimed that it is possible that the effect only works when using certain garlics and magnets and not on the ones they have tested.

It was only at the beginning of the scientific revolution, at the end of the 16th century, that letters and articles by researchers, claiming that the garlic effect was not correct, based on careful experiments, began to appear. Scientists in the 17th century established with certainty that the effect was not real, and this strange idea was buried as a footnote in the history books of science. 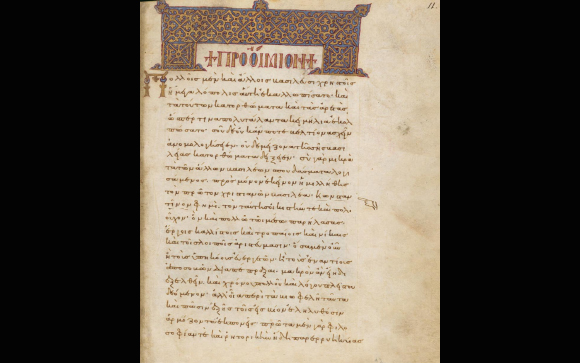 In the tenth century, in a comprehensive collection of writings on agricultural subjects, called “Geoponica”, it was stated that garlic not only cancels a magnet’s attraction power, but also causes it to repel iron. | Photograph: A page from the collection of “Geoponica” writings.

The Greatest Revolution Of All

There is nothing surprising or exceptional about a false scientific idea surviving for many years until it is disproven. Many past theories have maintained their status without sufficient evidence, such as the healing power of bloodletting by leeches or the existence of a substance called phlogiston that is released during combustion. We also know that it is likely that some of today’s accepted scientific theories will be disproven in the future. The unique thing about the garlic effect is that it is so easy to test. There was seemingly no reason for it to survive for more than 1,500 years.

Why did it take so long for scholars of the past to admit that there was no garlic effect? The answer lies in the greatest revolution of the modern era: the transition to the empirical method of inquiry.

According to the modern scientific method, hypotheses should be tested empirically. That is, we must carry out experiments or observations that will confirm or disprove our hypothesis. Furthermore, other researchers should be able to reproduce our experiments and observations and confirm that they are indeed correct and that the findings remain consistent and reproducible over time. The empirical approach began to lay the foundations for the modern scientific process in the 16th century, exactly the same years in which researchers began to challenge the idea of the garlic effect.

However, this explanation is incomplete. After all, even before the beginning of the scientific revolution there were those who conducted tests and experiments, even if they did not follow the thorough scientific method that is accepted today. As mentioned, already in the Middle Ages natural scientists attempted to test the effect of garlic on magnetism and found no evidence for its existence.

The additional explanation for the longstanding belief in the effect of garlic on magnetism lies in another, no less significant, perceptual change that occurred concurrently with the growth of the modern scientific method. For many years, an atmosphere of admiration towards the scholars of the past, especially those of ancient Greece, prevailed in medieval Europe. The starting point for most scholars was that everything established by the philosophers of the past, led by Aristotle and Plato, was correct.

This norm led to the fact that for hundreds of years, at least from the twilight of the Western Roman Empire and until the Renaissance, almost no one dared to question the laws of nature as described by the authoritative writers of the past. For example, this was the reason why the geocentric model of the solar system, which established that the sun and all the planets revolved around Earth, remained the accepted and undisputed model since the days of Aristotle, with Ptolemy following suit. It was only in the 16th century that Copernicus placed the sun in its rightful place in the center, in what is known today as the heliocentric model. 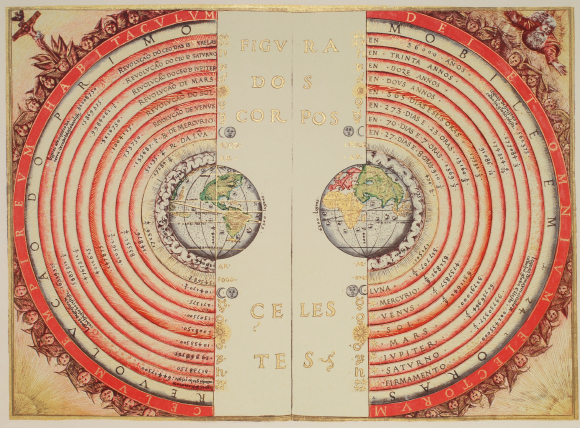 For many years in Europe of the Middle Ages, an atmosphere of admiration towards the scholars of the past, especially those of ancient Greece, prevailed. | In the photograph: Bartholomew Velho’s map (1568) that places Earth at the center of the solar system.

In a 2020 article on the garlic effect, science historian Christopher Sander explains: “Most of the sources of the Middle Ages (Latin and Arabic) and the early-modern period simply repeated the garlic effect by mentioning it as one of the properties of the magnet or of garlic… These repetitions are neither telling nor surprising, and they appear in the books as simply copied from older sources or each other. However, they testify that knowledge about the natural world was, to some extent at least, not derived from autoptical experience but from ancient and medieval authorities alone” (p. 528).

If so, the persistent belief in the garlic effect seems to be the result of a combination of errors in the copying of manuscripts, uncritical acceptance of ancient sources of authority, and the lack of a rigorous empirical method for testing scientific ideas. At this point, it is important to ask ourselves whether there may be other ideas that we accept blindly without questioning, simply due to our trust in a certain source of authority.

Luckily for us, the scientific method can help us identify false ideas and find more accurate explanations through a rigorous process of critical skepticism, based on experiments, observations, and scientific publications that allow other scientists to reproduce experiments under different conditions. However, we should not rest on our laurels  - we too may be overlooking correct and important ideas. It is always important to ask questions, to doubt, and to examine in a critical, empirical and evidence-based way any fact that is presented to us as an “absolute scientific truth”.