What is the Difference
Between DNA And RNA?

Both molecules transmit genetic information and consist of nucleic acids. Even their names sound alike, but their different chemical properties greatly affect their biological functions.

The genetic information of all living beings on Earth is stored in the DNA molecules that reside in each one of their cells. This information affects, among other things, the features of the organism - such as human eye color or the length of a cat’s tail - but in a more general manner, it can be described as a specialized instruction manual for the activity of each and every living cell. Each cell contains tiny, sophisticated machines able to read the information in the instruction manual and to produce proteins - the molecules that carry out most of the cell’s biological functions, according to these instructions. The protein insulin, for example, which is produced in pancreatic cells, is responsible for regulating blood sugar levels, while the protein hemoglobin in red blood cells, transports oxygen from the lungs to other cells in the body.

The path from DNA to protein passes through an important mediator - a molecule called RNA. Despite the high name resemblance to DNA, and the fact that both are nucleic acids, on closer inspection we will find subtle but significant differences in their chemical structure, which affect the specific  biological role of each molecule. 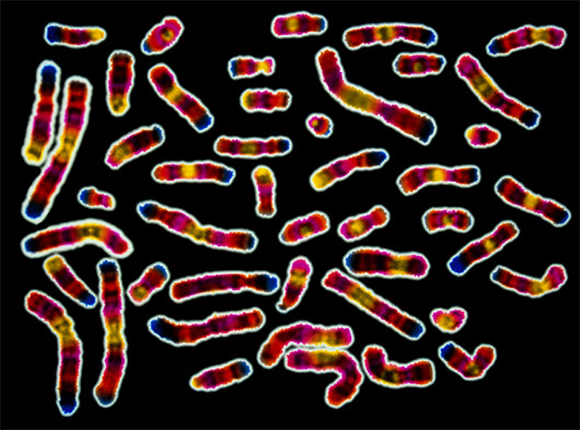 The genetic information of all living things on Earth is found in the DNA molecules that reside in their cells. Human DNA molecules, chromosomes Scott Camazine, Science Photo Library

RNA stands for RiboNucleic Acid. Each building block of RNA, termed nucleotide, consists of three parts: a sugar molecule with five carbon atoms (ribose), a phosphate group which consists of a phosphorus atom attached to four oxygen atoms, and a ring-shaped nitrogenous base consisting of a combination of carbon, nitrogen, oxygen and hydrogen atoms. Four types of nitrogenous bases exist, and, since sugar and the phosphate group remain identical in all nucleitodes, each nucleotide is named after its nitrogenous base. The four nucleotides: Adenine (A), Uracil (U), Guanine (G) and Cytosine (C), are commonly referred to by their first letter.

The four nucleotides are the building blocks of RNA. The complete RNA molecule is a very long, sting-like chain of nucleic acids. Additionally, particularly strong chemical bonds can form between the pairs A-U and G-C, which can affect the spatial structure of the RNA molecule, enabling folding and formation of bonds between different parts of the chain.

Another substantial difference between DNA and RNA is in one of the four bases. Instead of Uracil in RNA, DNA contains Thymine (T), marked by the letter T. Accordingly, the base pairs in DNA are A-T and G-C. Similar to RNA, these four building blocks are connected to each other in a very long chain, like beads on a string. 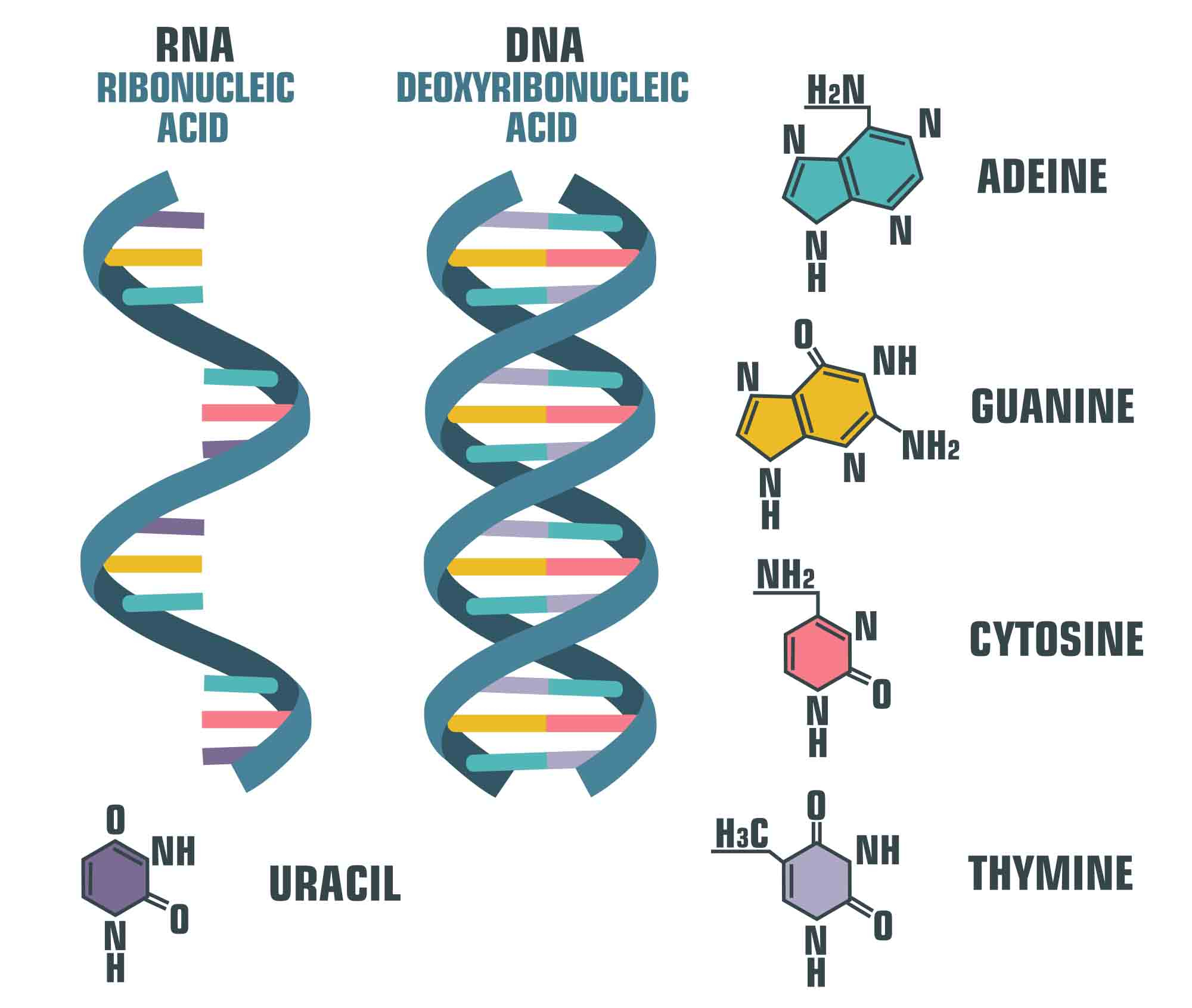 One tiny oxygen makes all the difference

In an article published in the journal Nature on April 25th, 1953, the scientists James Watson and Francis Crick described the three dimensional structure of the DNA molecule, according to measurements made by their colleague Rosalind Franklin. This was the original scientific finding of the famous double helical shape of the DNA molecule, characterized by the base pairs A-T and G-C, which connect the two strands of the double helix along its entire length.

Interestingly, and seemingly surprisingly in view of the apparent similarity between the building blocks of RNA and DNA, the RNA molecule does not normally form a double helix, but rather exists as a single coil. The presence of a single atom of oxygen near a hydrogen atom in the sugar molecule is enough to prevent an RNA molecule from organizing in a manner similar to that of  DNA. At times, RNA molecules arrange in completely different geometrical shapes, as in the case of a single strand that folds onto itself to form a structure reminiscent of a hairpin, which is highly important for RNA's function. 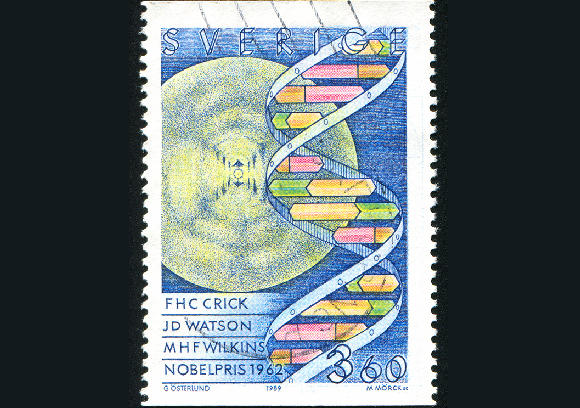 In 1962 a Nobel prize was awarded to Watson, Crick and Wilkins, the head of the laboratory in which Rosalind Franklin worked, for discovering the structure of DNA. Franklin was no longer alive at the time. A Swedish stamp commemorating the event depicts a double helix, and Franklin’s X-ray measurements that helped decipher the structure. |  rook76, Shutterstock

The difference between RNA and DNA is exhibited not only in the structure of the two nucleic acids, but also in the functions they perform. As mentioned above, the genetic instructions manual is stored in the DNA, with the four building blocks, arranged side by side along the DNA chain, form a sequence - a code that has to be translated by the cell in order to produce proteins. RNA, as we shall see, performs a different role, that of a mediator.

DNA molecules are very long, consisting of tens of millions of base pairs each. The first stage in the process that leads to the formation of a protein, based on a sequence stored in the DNA, is performed by an enzyme called RNA polymerase. RNA polymerase, which means ‘manufacturer of RNA’, copies, according to sequence, a short DNA fragment, usually several hundreds or thousands of bases in length, out of the long DNA molecule, producing a corresponding RNA molecule. This copying process, termed “transcription”, reproduces, according to the above described base pairing rules, a sequence of bases complementary to the one present in one of the paired DNA strands. Each Guanine (G) in the DNA strand is matched by a Cytosine (C) in the RNA, and vise versa, Thymine (T) is matched by Adenine (A), and, since no Thymine exists in RNA, Adenine is matched by Uracil (U).

Following transcription, the RNA molecule is transported to the protein factory of the cell - an organelle called the ‘ribosome’. This RNA molecule functions as a messenger that transports the ‘production instructions’ from the DNA to the ribosome and is therefore termed messenger RNA (mRNA). Recently, these molecules gained publicity due to the Coronavirus vaccines manufactured by the pharmaceutical companies Pfizer and Moderna, which are based on mRNA molecules that instruct the cells of the vaccine recipient to produce one of the envelope proteins of SARS-Cov-2.

Upon reaching the ribosome, the messenger RNA molecule encounters two additional types of RNA molecules. The first is ‘ribosomal RNA’ (rRNA), which is one of the key components of the ribosome itself. The second one is termed ‘transfer RNA’ (tRNA), whose three dimensional structure, reminiscent of the shape of the letter L, enables it to play a key role in the translation of the genetic information delivered by messenger RNA and in the production of the resulting protein chain. One side of the tRNA molecule binds a sequence of three bases in the mRNA molecule, while  the other side binds to an amino acid - a small molecule that comprises the building block of proteins. Each possible sequence of three RNA bases has a corresponding tRNA molecule binds to it, and each tRNA molecule carries on its upper part a specific amino acid, which matches the corresponding base sequence. The ribosome connects the amino acids received from the tRNA molecules, thus forming a chain of amino acids according to the precise base sequence copied by the mRNA molecule from the original DNA sequence. The resulting chain is a specific protein designated to to perform a certain cellular function. This process, that takes place entirely within the ribosome, is termed ‘translation’.

It is worth noting that the additional oxygen atom in the RNA molecule not only affects its structure but it also causes RNA molecules to undergo significantly faster self-disassembly, a process commonly measured using a time quantity termed ‘half-life’. While the half-life of RNA is on the order of minutes, DNA molecules can last for thousands of years. In terms of the mechanism of information transfer from DNA to the ribosome, the short half-life of mRNA is a desired quality: it is good to “delete” instructions from the cell’s memory to make room for new, more imminent instructions. However, when an mRNA molecule is used as a vaccine, its short half-life required that the vaccines be stored at very low temperatures. 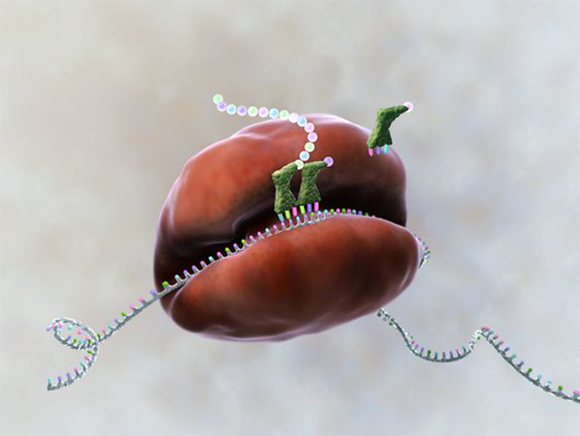 The ribosome, depicted in this image as a red ball with a slit, builds the protein by adding amino acids to the chain (the colored balls in the upper part). The mRNA sequence, depicted as a chain within the groove, determines which amino acid is added to the protein chain at each instance. The tRNA molecule (in green) connects the mRNA to the appropriate amino acid |  Image: Gunilla Elam, Science Photo Library

Over the years, scientists have also discovered RNA molecules that do not take an active part in the processes of transcription and translation of the genetic information stored in DNA. For example, some RNA molecules are involved in the activity of enzymes - proteins that specialize in catalyzing certain chemical reactions. Other RNA molecules are capable of catalyzing chemical reactions without the need for proteins. Owing to this dual role of RNA molecules, which can both store genetic information, like DNA, and catalyze chemical reactions, like proteins, some researchers believe that at the beginning of life on Earth there were no proteins or DNA, but rather only RNA. This hypothetical period is referred to as the “RNA World”.

RNA and DNA are thus different types of nucleic acids, responsible for the storage of genetic information in the living cell and both play a fundamental role in the translation of this information into proteins, which perform a variety of functions. Although the difference between these two molecules, in terms of their chemical composition, is quite small, it translates into a great difference in their structure and function. This is an excellent example of the wonders of chemistry: the presence or absence of oxygen in a nucleic acid creates the molecular complexity without which life on Earth would not exist as we know it.