A commonly used fertilizer also used as an explosive by terrorists: What is the material that seems to have caused the lethal explosion in Beirut's port?

The explosion that ripped through Beirut’s port killed more than 100 people, wounding thousands and causing severe damage throughout the city. Initial reports indicate that the cause of the explosion was ammonium nitrate, a commonly used fertilizer and the culprit of a long list of devastating disasters. Ammonium nitrate is a compound containing nitrogen, a vital element for life on Earth. Nitrogen is also critical for modern industrial production.

A Fertilizer Derived from Thin Air

Nitrogen is the most abundant substance in Earth’s atmosphere—about 80% of the air we breathe consists of pure nitrogen. It is also one of the most important elements for life: It is one of the building blocks of proteins, DNA, RNA, and other substances involved in vital biological processes. Surprisingly, despite its vast abundance in the atmosphere, nitrogen is available for our use only in small quantities. In the atmosphere, nitrogen is found in the form of N2, a molecule that consists of two atoms of nitrogen linked by a very strong chemical bond, called a triple covalent bond. The only organisms that can break that bond are certain types of algae and bacteria, mainly soil bacteria, which use nitrogen and hydrogen to produce a compound called ammonia, NH3. Other bacteria use the resulting ammonia to produce nitrogen oxides, such as nitrate, NO3- and nitrites, NO2-. Those nitrogen compounds can then be taken up by plants, which incorporate them into the biological building blocks mentioned earlier. Through the food web, nitrogen moves from plants to herbivores, their predators, and in fact, to the entire living world.

Nitrates also form through non-biological events, such as lightning storms and volcanic eruptions. That is how minerals containing nitrates are produced, the most famous of which is saltpeter, a mixture of potassium nitrate, KNO3 and sodium nitrate, NaNO3.

In nature, plants manage to grow with the nitrogen quantities supplied by minerals and bacteria. However, the nitrogen in the soil cannot sustain intensive agricultural crops with high yields year in and year out, so the soil has to be enriched with nitrogen (and additional elements) from other sources. Historically, the most important source of nitrogen for agriculture was animal waste, but in the 19th century, scientists began developing more efficient chemical fertilizers. This led to an enormous demand for the vast saltpeter deposits in northern Chile, which led to military conflicts. At the beginning of the 20th century, German scientist Fritz Haber developed an industrial process for the production of ammonia from atmospheric nitrogen. Along with a process developed by another German scientist, Wilhelm Ostwald, Germany’s industry also manufactured nitric acid, HNO3, the starting point for all the nitrate compounds. This provided Germany with a seemingly infinite fertilizer source, which spared the country from famine during World War I. 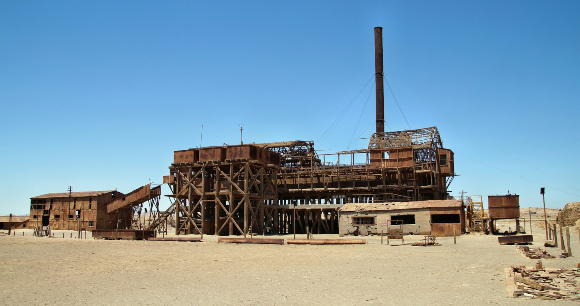 Nitrates were used by Germany for more than fertilizing soil. Nitrogen oxides release a vast amount of energy when they break down, making them an important ingredient in explosives. In ancient China, such oxides had been used in gunpowder, and in the 19th century they emerged as components of far more powerful explosives, such as nitroglycerine, the dynamite developed by Alfred Nobel and TNT. These explosives are based on nitrite (NO2) or on nitrate groups, which offer a dual advantage: First, nitrogen atoms have a strong tendency to bind together and form N2 in a chemical reaction that releases a great deal of energy in the form of heat. Second, the process releases oxygen, enabling efficient burning of the remaining explosive components, without need for atmospheric oxygen. Heat and oxygen accompanied by the rapid release of large quantities of gas, create a fierce and rapid reaction, which we experience as an explosion.

Nowadays, nitrogen compounds are used in a wide range of advanced explosives, from the gunpowder in fireworks, to plastic explosives such as C4 or Semtex, and even in vehicle airbag inflation mechanisms.

Nitrogen compounds are still used as important agricultural fertilizers. Materials such as ammonia, urea [CO(NH2)2], and potassium nitrate provide plants with nitrogen, but they are also used by terrorist organizations to manufacture explosives. Ammonium nitrate is one of these “dual use” substances, and, according to various reports, it was the cause of the immense explosion in Beirut. 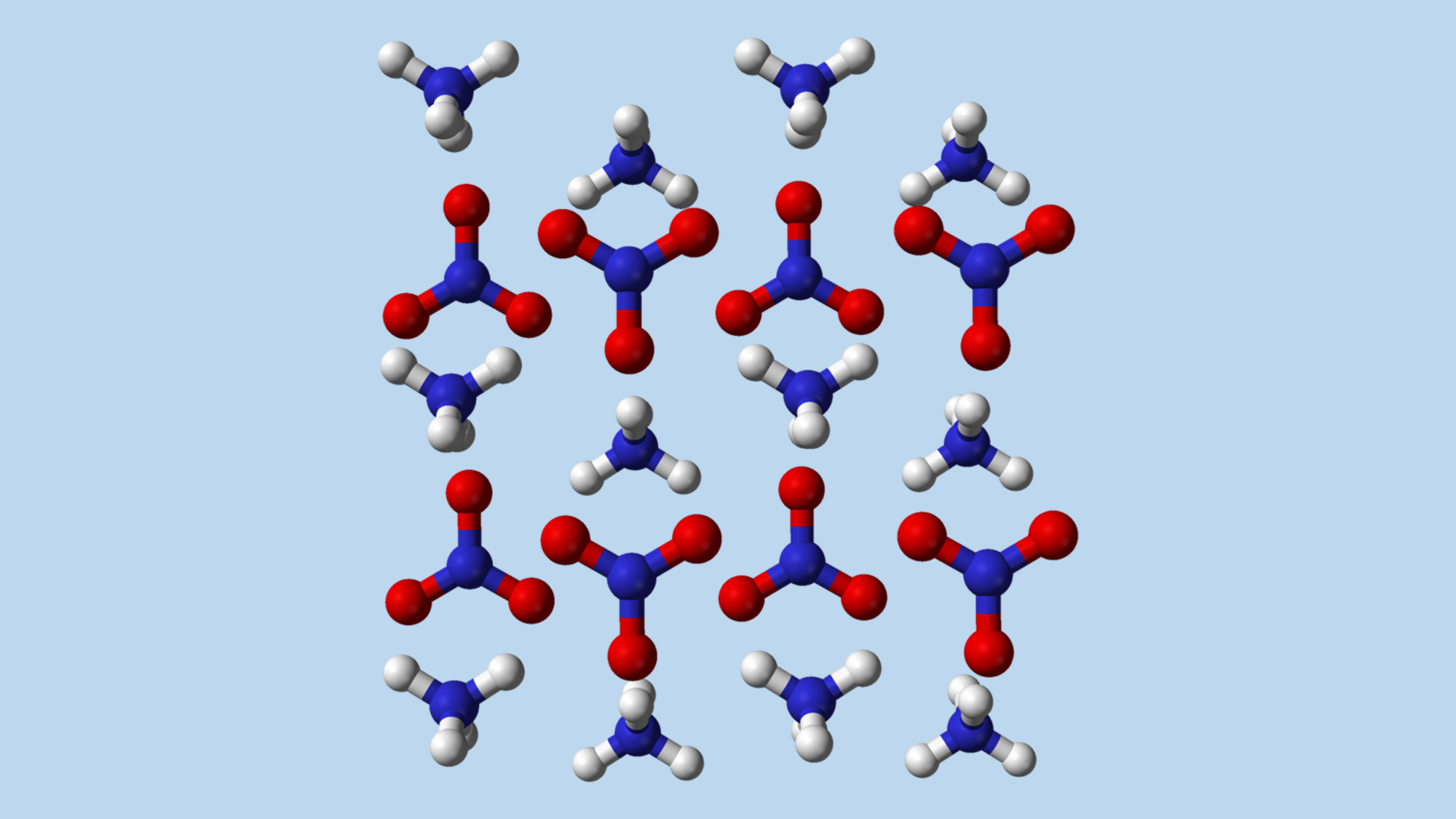 As its name indicates, ammonium nitrate contains nitrate and ammonia, with the chemical formula NH4NO3. Because of its nitrogen content and because it is relatively easy to manufacture at a low cost, it is a popular fertilizer in widespread use. But these same properties also facilitate the production of ammonium nitrate-based explosives. For example, a mixture of 94% ammonium nitrate with 6% diesel fuel (or similar substances) is an explosive called ANFO (Ammonium Nitrate Fuel Oil), used in a number of terrorist attacks, including the IRA bombings in the UK. On April 19th, 1995, American terrorists blasted 2,000 kilograms of ANFO, adding to it nitromethane instead of fuel to intensify the explosion, in a van parked next to a federal building in Oklahoma City. The huge explosion killed 168 people, wounded hundreds, and severely damaged surrounding buildings.

Even when it is not used for explosives, ammonium nitrate can turn into a dangerous material under certain conditions, although it is an inert material when stored under proper conditions. At a temperature of 170 degrees Celsius, solid ammonium nitrate begins to melt and subsequently breaks down into ammonia and nitrogen oxides. The oxide compounds provide the oxygen for combustion and can also feed the source that initially caused the heating. As the fire rages on, the temperature rises, more ammonium nitrate breaks down — yielding more nitrogen oxides. The ammonia in the compound breaks down as well, creating a large volume of gas. When this process occurs in a closed space, the gases accumulate rapidly and reach a high pressure, resulting in a fierce explosion. The more ammonium nitrate is stored in a space, the higher the risk of an explosion. According to reports from Beirut, the exploded warehouse contained over 2,000 tons of ammonium nitrate.

One important risk factor is storing ammonium nitrate next to certain substances. Such substances may be fuels, dry materials such as sawdust, or other fertilizers that contain, in many cases, phosphorus and chlorine compounds. In the presence of these materials, even a limited fire can cause the ammonium nitrate to break down, allowing gases, primarily oxygen, to feed the fire. Even a fire in an adjacent warehouse can generate enough heat to initiate the breakdown process.

Another risk factor is the duration of storage. Ammonium nitrate is typically stored in sacks and, over time, especially if it is not stored under optimal conditions, sacks can tear or disintegrate. This increases the material’s exposure to environmental conditions and raises the risk of contamination and loss of stability. According to the reports of the explosion in Beirut, the ammonium nitrate was stored in improper conditions for more than six years. 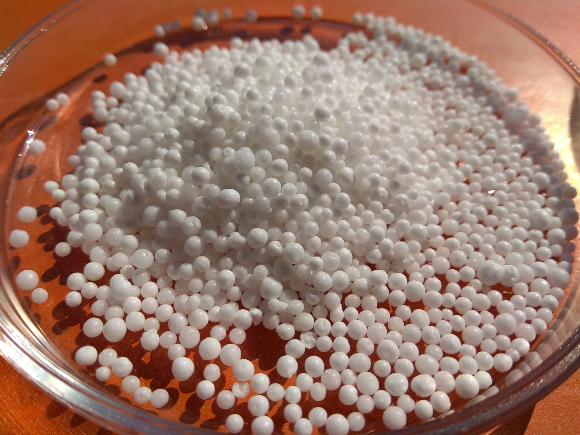 A Series of Disasters

The explosion in Beirut is the most recent event in a long series of accidents and disasters caused by negligent treatment of ammonium nitrate.

One of the most famous of these disasters occurred in April 1947, at the Port of Texas City in the USA. As a cargo of ammonium nitrate was loaded onto a ship, a fire broke out, after more than 2,000 tons of the fertilizer had already been stored in the ship’s hold. The captain ordered to seal the hold and inject steam into it to put out the fire. It was only a partial solution, because when ammonium nitrate burns, it generates its own oxygen and the water did not halt that process. An hour later, the ship exploded, setting fire to another ship, anchored 250 meters away. The second ship’s hold contained hundreds of tons of ammonium nitrate and sulfur. The lethal combination caused an enormous explosion, smashing windows 60 kilometers away, killing 581 people and injuring thousands more.

Similarly, a 1921 explosion in a fertilizer factory in Oppau, Germany, left 561 people dead. The explosion was caused by workers’ attempts to break up a single lump of ammonium nitrate fertilizer and ammonium sulfate which had solidified together, using explosives. In 1942, history repeated itself as 189 people were killed in another explosion in Belgium, when a similar method was used to break up a large, solidified lump of ammonium nitrate. And the list goes on, with numerous other disasters and accidents with fewer casualties. Over the 20th century, over 1,000 people died in accidents involving ammonium nitrate.

The series of accidents continued into the 21st century. In 2013, 15 people died in a fire that broke out in a Texas warehouse storing ammonium nitrate; and just five years ago, 173 people died from an explosion in an ammonium nitrate storage warehouse at the port of Tianjin, China, triggered by a fire in an adjacent warehouse. 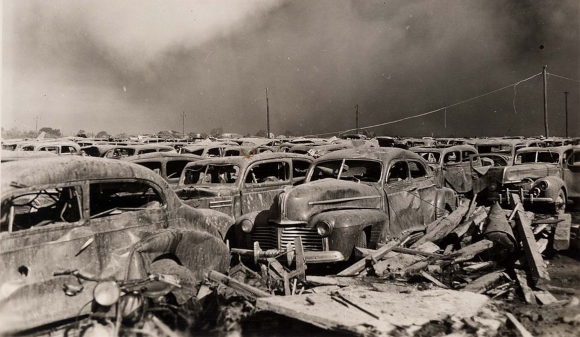 One of the largest conventional explosions in history. A parking lot 400 meters from the Port of Texas City after the explosion. | University of Houston Digital Library. Public Domain.

Reports received to date indicate that the explosion in Beirut was also caused by a fire, but it is still unclear whether the initial fire broke out in the warehouse itself or elsewhere. There is still no official confirmation that the explosion was indeed caused by ammonium nitrate. The initial reports suggested a fire in a nearby fireworks warehouse and it is possible that this caused a fire that led to the explosion. It is also highly possible that the presence of additional substances increased the risk of explosion.

A complete breakdown of ammonium nitrate gives rise to gases that are not dangerous for human inhalation: Nitrogen, oxygen, and water vapor (2NH4NO3 → 2N2 + O2 + 4H2O). However, complete breakdown is very rare, especially in variable conditions and in the presence of large quantities of substances. One incomplete reaction product is nitrous oxide (N2O), known as laughing gas. Nitrogen dioxide (NO2) is another gas product; it is toxic in large concentrations and the red smoke that rose from the explosion site could be an indication of its presence.

Because of the risks associated with ammonium nitrate, many countries have set stringent rules for fertilizer storage, which include limiting the quantity that is allowed to be stored at a single site; the types of materials allowed to be stored in close proximity; the composition of the packaging materials; the storage conditions, such as ventilation and dryness; and warehouse safety regulations. Put together, this highlights the fact that the cause for most of the disasters involving this material was human error: Negligence, disregard of the rules, and poor understanding of the danger. It seems that these factors are to blame for the tragedy in Beirut as well.