How Does an Air Conditioner Work?

It can save us from the heat on a hot summer day, but an air conditioner does not work magic - it just transfers the hot and humid air to a different place, using the principles of thermodynamics

We owe our ability to sit in an air conditioned room on a hot summer day, albeit indirectly, to the printing revolution that began with the invention of the printing press by Johannes Gutenberg in the middle of the 15th century. What is the connection? Nearly 120 years ago, the Brooklyn based Sackett-Wilhelms Lithographing and Publishing Company faced a serious threat to its reputation of a high-quality color printing publisher: the intense heat and high humidity of the New York summer wreaked havoc on the printing house’s paper sheets, causing them to expand and shrink and preventing the colored ink, in which the firm specialized, from properly attaching to the paper.

Salvation came in the form of a 25-year-old engineer, Willis Carrier, who came up with a brilliant idea - to reduce air humidity by blowing air over steam coils filled with cold water. As the excessive moisture in the air condensed on the coils, air humidity in the room decreased and, as a welcome side effect, so did the temperature. Thus, the need to reduce air humidity in order to save the paper sheets significantly improved working conditions for the printing house workers, who now had the privilege to comfortably work in a less humid and cooler environment, even at the height of summer.

An improved version of Carrier’s machine came into widespread use in theaters and cinema halls in the early 1920s, but it was only after World War II that the first air conditioners became available as a common household appliance in the United States and elsewhere in the world. As highlighted by the title of an extensive 1945 article in Life Magazine: “It’s Cool Inside: Advertising Air Conditioning to Postwar Suburbia”.

Although air conditioners were invented no earlier than the beginning of the 20th century, the physical principles that enable their operation were studied and substantiated as early as the mid-19th century, and are related to the foundations of the branch of physical chemistry termed thermodynamics. 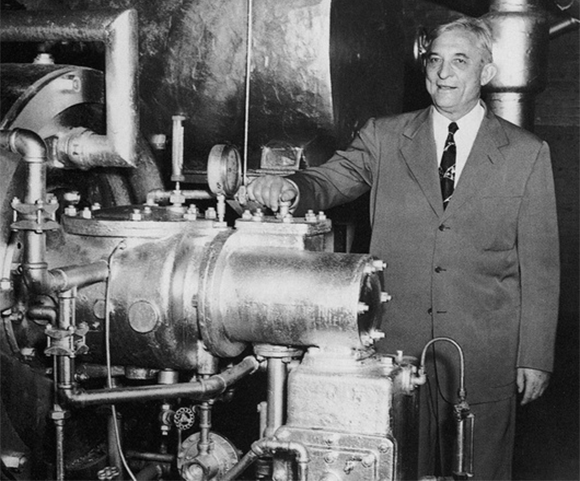 How Does an Air Conditioner Work?

During hot summer days, the main purpose of an air conditioner is to cool the air in a given space. However, as we know from the first law of thermodynamics, known as the law of conservation of energy, energy of any type, including heat, cannot simply disappear. Indeed, an air conditioner doesn't make the heat disappear miraculously, it rather simply lets it go out.

How does this happen? The main component of an air conditioner is a system of coils that carry coolant. At the first stage, when the coolant comes into contact with the hot air in the room, the liquid heats until it reaches a sufficiently high temperature and turns into gas. The transition of liquids into a gaseous phase requires an investment of heat, although the temperature does not change at this point. The heat invested in the liquid-to-gas transition comes from the hot air in the room, and thus the air in the room “loses” its heat and cools down.

In order to allow the air conditioner to work cyclically, the system of tubes that contains the gas is placed outside of the house. The heat in the gas is released into the open air outside using dedicated metal plates located on the outdoor unit of the air conditioner, also known as the “engine”. To turn the gas back to a liquid, the gas undergoes compression and condensation. The coolant is now transported back into the house, ready for another round of cooling. This process is accelerated with the help of fans that push the hot air in the room towards the tubes containing the coolant, as well as an external fan that accelerates heat dispersion to the outside. 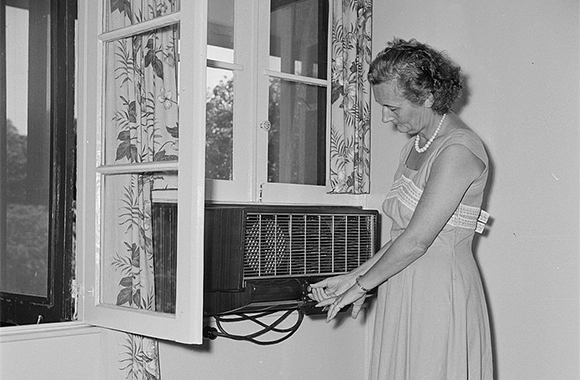 The air conditioner, then, is a machine that operates cyclically. A similar group of machines that work cyclically are engines, commonly known as “Carnot Cycles”, named for the principles developed by the french physicist Nicolas Léonard Sadi Carnot in the mid 19th century. A Carnot Cycle explains how heat can be converted in order to work cyclically, based on the second law of thermodynamics. 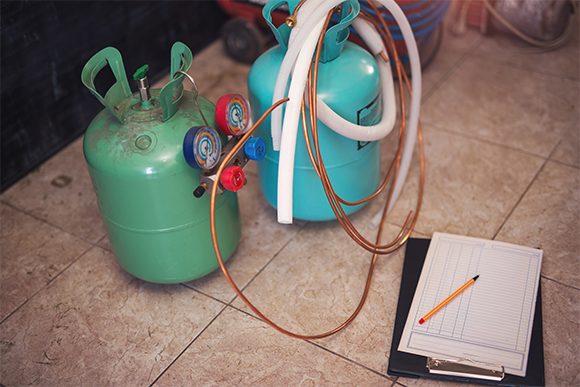 Coolants, sometimes referred to as “refrigerant gas”, form a fundamental part of an air conditioner’s operating mechanism and therefore their physical properties are of great importance. For example, a coolant's evaporation temperature should be low enough to allow for an easy phase transition from a liquid to a gaseous state. Additionally, it is important for coolants to be non-toxic, non-flammable and not to cause significant harm to the environment. In the past, a group of substances that contained atoms of carbon, hydrogen, chlorine and fluorine, generally termed CFC (Chlorofluorocarbons),  was used for this purpose, but since it was found that these substances damage the ozone layer as they leak into the atmosphere, their use has diminished. Today, it is more common to use a mixture of substances that contain atoms of carbon, hydrogen and fluorine (Difluoromethane and Pentafluoroethane), also known as R410, and is sold under several trade names. These substances, which contain neither bromine, nor chlorine, do not harm the ozone layer, and are still suitable for use in terms of their physical properties. A similar principle is used to control the temperature control in refrigerators and freezers.

Nowadays, most air conditioners include options for the control of the  temperature as well as of the force of the fan, returning the cold air from the cooling coils to the room space. At times, central air conditioning systems are planned so that the distance between the tubes that contain the coolant, the air in the room and the outside unit of the air conditioner that releases the heat to the environment, is quite long. For this purpose, a set of tubes for the transport of air from the venue we wish to cool to the coolant-containing coils, is added. However, the previously described operation principle applies to all types of air conditioners, whether large, small, smart or simple.