The combination of heightened physical arousal and calming messages from the brain can create a sense of pleasure and excitement - for example from horror movies and extreme sports.

The heroine slowly pushes the creaking door of the old house. She cautiously enters and examines her surroundings. Cobwebs hang from the ceiling and dust covers the walls, and in the distance, a flickering light catches her eye. Step by step she moves towards the light and her footsteps echo through the abandoned house. Suddenly, a hand lands on her shoulder. Her heart skips a beat and she spins back quickly. We are anticipating the worst.

“There you are! We’ve been looking all over for you”’, says her partner. As our heroine calms down, we calm down with her and even smile. That was scary! And enjoyable! But wait, why did we actually enjoy it?

Fear is a natural and essential response that served our ancestors when they had to survive in nature, for example when encountering predatory animals, and continues to aid us today in the modern world. In response to a stimulus that is perceived as a threat by the brain, the body undergoes a series of changes, intended to improve our chances of survival.

These changes bring our body into a state known as the “fight or flight” response. In this state, the sympathetic nervous system - a group of hormonal and neural commands from the brain to the rest of the body, which enhances our alertness and prepares us to respond quickly to danger, is activated. Among other things, this system increases our heart rate, breathing rate, and energy supply to our muscles. The process starts when the brain instructs certain glands in the body to release hormones, such as adrenaline and cortisone, into the bloodstream. When the hormones reach their target organs, such as the heart and lungs, they bring about the necessary changes in the respective activity of these organs.

A small, almond-shaped structure in the brain called the amygdala is responsible for determining whether a certain situation is indeed dangerous enough to arouse fear in us. The amygdala receives sensory input from the visual and auditory senses and analyzes them for signs of danger or threat. It functions, for example, when we see a human face expressing an emotion, and in the case that the emotion is a negative one, such as anger or fear, the activity of the amygdala increases.

The amygdala is also involved in the way in which fear is encoded into our memories, and experiments on mice have shown that it is essential for establishing the memory of a fear-inducing stimulus, at least under laboratory conditions. Learning to fear harmful factors is a vital survival skill and it occurs throughout our lives. In this way, we are able to learn on our own which stimuli indicate danger and which do not, and to adapt our reactions and behavior accordingly if exposed to them again later in our lives.

In the “fight or flight” response, a group of hormonal and neural commands from the brain are sent to the rest of the body’s organs, enhancing our senses and preparing us to respond quickly to danger. | Illustration: VectorMine, Shutterstock

What happens when we are not in real danger? In the modern world, there is no shortage of real dangers, such as cars rushing past us as we cross the road. However, as a species that shapes its own environment, we possess a unique prerogative that allows us to find ourselves in situations that appear dangerous, but really are not.

There are many such examples. They include horror movies, where we are exposed to scary stimuli projected to us on the screen; roller coasters, which provide the feeling of a dangerous and out-of-control fall; bungee jumps, in which we actually do fall, but are protected by a flexible cable and a secure harness; and many other types of activities. In such situations, the body feels threatened and responds accordingly by activating the sympathetic nervous system, although consciously we know that we are not really fighting for our survival and that we have not lost control.

In addition to the hormones that our body releases to reach an alert state, at the end of the exciting experience our brain secretes another group of hormones called endorphins, which are also released following strenuous physical activity. These substances create a feeling of euphoria, which counteracts the stress we experienced.

During the formation of a memory of a certain fear, the amygdala also releases the neurotransmitter dopamine, which, among other things, is linked to the activation of the reward system that gives us a positive feeling in response to achievements. This combination of heightened physical alertness and the automatic release of hormones into the bloodstream, along with calming messages that are sent from the thinking parts of our brain, which recognize that the danger is not real, can create a pleasant feeling of pleasure and excitement. 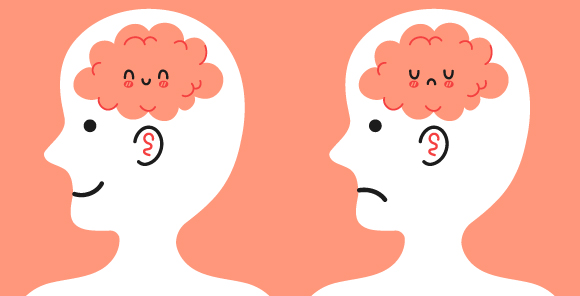 We possess the unique prerogative to find ourselves in situations that appear dangerous but really aren’t. | Illustration: svtdesign, Shutterstock

It Brings Us Together

Human beings have loved to scare each other since the dawn of time. It is possible that originally these frightening stories were intended to warn the younger generation about the dangers lurking outside the protective walls of their tribal community, and to enforce religious and moral values. However, for many years now we have been telling scary stories and watching horror movies for the thrill of it. It is difficult to determine what degree of fear will be enjoyable for each person. The tendency towards feeling thrill and the resistance to frightening stimuli varies greatly from person to person, and each person’s tolerance of fearful experiences is different.

To investigate the relationship between fear and pleasure, researchers from Aarhus University in Denmark followed participants in a haunted house experience. The researchers monitored the participants’ heart rates throughout the experience, recorded their reactions to peak scary moments, and asked them to rate their enjoyment along the course of their experience. When they analyzed the relationship between fear and pleasure, they found that it fit the shape of an inverted letter ‘U’, meaning that the participants’ enjoyment reached a peak when they were scared, but not too scared. To enjoy ourselves according to our tolerance to scary stimuli, we need to find out exactly how much we like to step out of our comfort zone without getting too far from it. It was also found that women reported a greater degree of fear than men, and less pleasure. 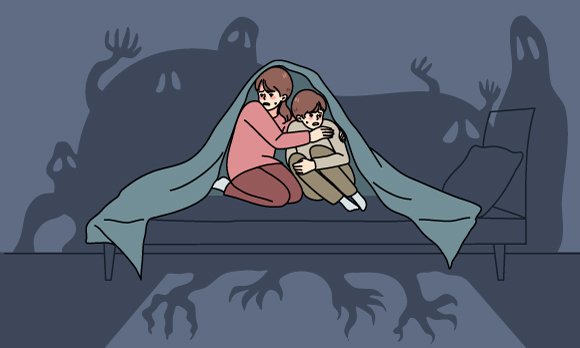 Watching a horror movie and staying in a haunted house are fun experiences to do with friends. | Illustration: Drawlab19, Shutterstock

Fear also has social significance. When people experience fear together, the fear strengthens the consolidating element of the experience, and the bonds that we create in times of fear and excitement tend to be strong and deep. A study found that men who experienced a frightening event in a laboratory experiment tended to be more attracted to the female researcher who conducted the experiment compared to those who had a neutral experience with her.

Watching a horror movie and staying in a haunted house are fun experiences to do with friends. Being close to other people can also reduce the unpleasantness that accompanies extreme situations of fear or stress.

In the modern world, properly controlled fear can be a positive factor that adds excitement and increases social bonding when experienced in the right amount. However, we must remember that the way we experience fear varies from person to person, and too much fear and stress can negatively impact our performance over time. As long as we’re aware of our limits, there is no reason not to grab a bag of popcorn and watch the latest horror movie with friends from the comfort and safety of the couch.