What can you do to reduce your risk of infection? How would you know if you are infected, and what should you do if you find that you are? When will a vaccine be available? Read on for some useful tips

The novel coronavirus, SAR-Cov-2, first appeared in China at the end of 2019, and has since spread throughout the world, to almost every country – including Israel.

COVID-19, the disease caused by SAR-Cov-2, affects the respiratory system (like flu). It is too early to predict its overall mortality rate, but the initial assessment places it at around 2%. However, the mortality rate will probably be significantly higher in high-risk groups, such as elderly people and/or those with preexisting conditions. By comparison, the SARS virus of 2003 had a 9.6% mortality rate, while the mortality rate of the 2012 MERS outbreak was 34%, but fortunately, it was not very contagious.

The incubation period (the time from infection to the appearance of symptoms) for SARS-CoV-2 is quite long, and changes from person to person. Symptoms may emerge within a couple of days in some, or after two weeks in others. The virus appears to be contagious already during some of this incubation period, even before the infected person shows any symptoms. In other respiratory viral diseases the incubation period is usually about two days in the flu, 2-10 days in SARS, and five days in MERS.

The rate of infection, or the speed at which the disease spreads, tells us how many people on average are infected by someone carrying the disease. The infection rate for seasonal flu is 1.3 and for SARS – 2. When infection rate is less than 1, the disease will gradually disappear. In the January 23 briefing, the World Health Organization (WHO) estimated that the infection rate for COVID-19 was 1.4-2.5. Another study found that the rate is far higher, between 2.24-3.58. Either way – it’s considered highly infectious. 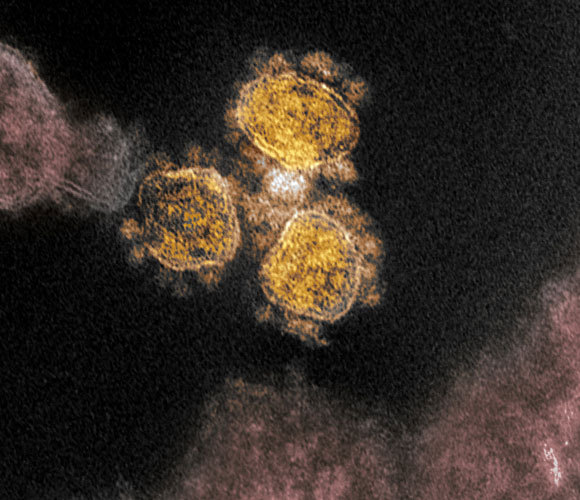 The virus appears to be infectious, even before symptoms appear. The SARS-CoV-2 virus emerging from a cell. Electron microscope photo. Credit NIAID-RML.

How can we protect ourselves?

We’ve put together some practical information that takes into account the relatively long incubation period and the high infection rate, based on the advice from the WHO and the Israeli Health Ministry.

How the virus is transmitted among people is still not entirely clear. We do know that similar viruses are transmitted through saliva droplets and other small particles expelled by the respiratory system when we sneeze or cough, which do not move freely through the air. This means that there are some relatively effective actions each one of us can take in order to reduce the risk of infection.

Hands should be washed thoroughly and very frequently using soap and water, or, at the very least, using alcogel. Sneeze or cough into a tissue, your sleeve, or elbow. Coughing or sneezing into the air will send the virus into the surroundings, and sneezing or coughing into your hands is less advisable, as this would carry the virus onto any surface we then touch with our hands. It’s also important to avoid touching your nose, mouth, or eyes with hands that are not clean, and of course, stay away from people who are infected and avoid touching them.

Make sure you stay up-to-date with the latest developments and follow the Health Ministry’s instructions to protect yourself and others from infection.

How do I know if I’ve been infected?

The most common symptoms are fever, tiredness, and a dry cough. Some people may suffer from muscle ache, a blocked or runny nose, sore throat, and diarrhea. About one in six of those infected will develop a very severe form of the disease, which includes breathing difficulties. Older people, especially if they have a compromised immune system or chronic medical conditions such as high blood pressure, heart problems, or diabetes may also become much more seriously ill. If you are suffering from a fever, a cough, and breathing difficulty and may have come into contact with someone who has the disease, call the emergency services (Magen David Adom in Israel, dial 101), in order to establish the possible exposure risk and whether a home test is possible. Do not go to your doctor’s office or to the emergency room.

Currently, testing for coronavirus is only conducted on individuals who may have been exposed to the virus or have come into contact with someone positively diagnosed, and only once symptoms have appeared. Diagnosis is done in a laboratory, on a sample taken from the respiratory system. The sample is sent for lab testing only with the approval of the Health Ministry’s district doctors. 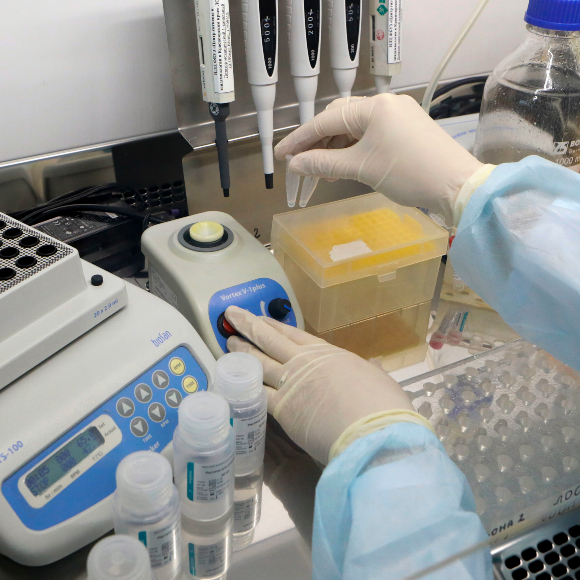 Testing for the disease is done on a sample taken from the respiratory system. Laboratory testing for coronavirus. Photo: Sputnik / Science Photo Librar

The test came back positive – what’s the treatment?

There is no specific treatment for the disease. In severe cases may be given supportive care as their body fights the disease. Most patients (around 80%) will have mild symptoms and recover without the need for special treatment.

At the first stage, patients are classified according to the severity of their symptoms: Mild, moderate, and severe, which includes severe pneumonia (ARDS). During the medical treatment, precautionary measures are required, including strict adherence to hygiene and sterilizing any surfaces touched by the patient; avoiding direct contact with blood, sputum, mucus, or cuts in the patient’s skin; thorough sterilization of medical equipment; and destruction of waste.

Supportive treatment for those in need include oxygen for patients suffering from shortness of breath, close observation, and antibiotics to fight bacteria which may lead to pneumonia or more severe respiratory problems. Lab tests of respiratory system and blood samples to identify pneumonia-causing bacteria and sepsis should be taken every two to four days. Testing will continue until two consecutive negative results are obtained, from tests taken at least one day apart.

Medical staff are required to watch closely for signs of septic shock – a life-threatening condition that develops when blood pressure drops sharply following a severe infection, potentially causing sepsis that can damage the body’s vital systems.

There is currently no specific treatment. Experimental treatments can only be conducted as part of supervised and approved clinical trials.

Supportive care: Oxygen for patients suffering from shortage of breath and antibiotics for pathogenic bacteria.

Laboratory testing: Blood tests and samples from the respiratory system.

Frequency: Every 2-4 days. Close observation to identify possible septic shock. Early identification and immediate treatment of any life-threatening conditions that can lead to a fast deterioration in the vital organs and death.

Specific treatment of the virus: Currently, there is no recommended treatment. Medications that have not been properly tested or experimental treatments must not be used.

What about a vaccine or cure?

Most vaccines work by injecting into the body a weakened or inactivated version of the pathogen of the virus or bacteria. This is how the immune system learns to identify a foreign invader and develops a defense against it. If the body is then exposed to the wild-type pathogen, it will then know how to fight it. Numerous research facilities and pharmaceutical firms throughout the world are currently working to develop a vaccine against SARS-CoV-2 and medications to treat the disease it causes.

As the virus’s genome is already known, sections from it can be used for vaccine development. The American biotech company Moderna has already reported on the development of the first potential vaccine. It was sent for testing by the National Institute of Allergy and Infectious Diseases (NIAID) in the U.S. for clinical trials on humans. If the vaccine is found to be effective and safe, it will then be ready for use in about a year, once a pharmaceutical company is found that can produce the vaccine.

A therapeutic drug called Remdesivir was developed by the American company Gilead, which has already initiated clinical trials in humans in China and the U.S., with results expected in April. In recent days, the company announced that in March, it will begin two more clinical trials involving about 1,000 patients in additional countries.