The ER and Golgi -
The Cell’s Production Line

The cells that make up our bodies are remarkably complex structures capable of performing a wide variety of different functions within a relatively small space. This is made possible by the presence of different organelles within the cell, each of which specializes in certain functions that are unique to it.

An organelle is a structure surrounded by a membrane, which separates its contents from the rest of the cell, an encasing similar in structure to the plasma membrane that surrounds the cell itself. In this manner any organelle can sustain a different environment, different protein composition or acidity level, for example, and this environment allows it to perform its functions.

The cell’s endomembrane (“inside the membrane”) system is in charge of the production of certain proteins and fatty molecules and their distribution throughout the cell and the entire body. The system was discovered in the late 19th century by Italian scientist Camillo Golgi. While studying nerve cells, which he dyed black, Golgi noticed net-like structures within the cells. Only many years later, when visualization methods improved significantly, did it become clear that this network of membranes is composed of separate organelles. Golgi was awarded the 1906 Nobel prize in Physiology of Medicine for his discoveries.

Today it is known that this network is composed of three types of organelles: Golgi bodies, the Endoplasmic Reticulum (ER) and the Lysosomes. While these are separate organelles, they maintain an extensive communication between each other and even share membranes. Here we will focus on two of them: the Endoplasmic Reticulum and the Golgi apparatus. We will understand their functions, structure and how they communicate with each other to enable the cell to perform its different functions. 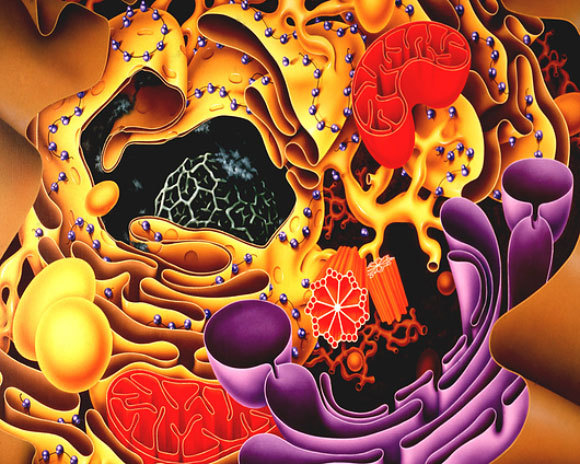 The endomembrane compartment is composed of three types of organelles: The Golgi apparatus, seen in purple in the illustration, the Endoplasmic Reticulum in yellow, and the Lysosomes | Francis Leroy, Biocosmos, Science Photo Library

In 1945, biologists Albert Claude, Keith Porter and Ernst Fullam, were able to visualize the endoplasmic reticulum in detail for the first time. Using an electron microscope, which enables the visualization of intracellular structures at a resolution much higher than the one possible with conventional light microscopy, they observed a lace-like network, which Porter named the endoplasmic reticulum. It was later discovered that this network is present in every cell that contains a nucleus (eukaryotic), but not in cells with no nucleus (prokaryotic), such as bacteria.

The ER consists of a network of hollow tubes with membranous walls.This network has two parts - a rough one and a smooth one. The rough endoplasmic reticulum (rough ER) is so named due to the multiple ribosomes that are attached to its outer surface, endowing it with a rough appearance. Ribosomes are structures that consist of proteins and nucleic acids responsible for producing proteins according to instructions that arrive from the DNA in the cell’s nucleus. The process of protein production is termed translation. 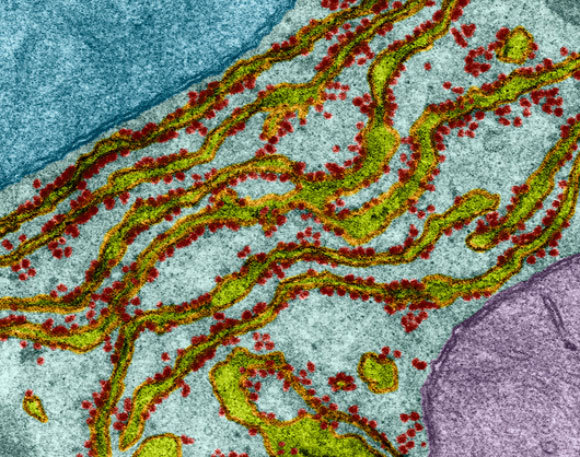 Thus, proteins are produced in the endoplasmic reticulum, but only certain proteins - those that are destined to be present in the cell’s plasma membrane or in a specific organelle, or proteins that are secreted out of the cell. The ribosomes that produce them are attached to the endoplasmic reticulum and thus the newly synthesized proteins enter its inner space upon production. Important steps in the folding of proteins into the three-dimensional conformation required for their function, as well as quality control processes that determine whether these proteins will proceed in the production process or will become degraded, occur within the ER network’s inner space. Proteins destined to function in the cytoplasm of the cell, rather than within its membrane or organelles, are produced by other ribosomes, which are not attached to the endoplasmic reticulum.

The smooth endoplasmic reticulum (smooth ER) has no ribosomes attached, and thus appears smoother when viewed from the outside. Its main role is to produce lipids - fat and other oil-soluble molecules - which are used as building blocks for cellular membranes as well as membranes outside the cell as well. The smooth ER also functions in the breakdown of fats and other potentially harmful substances.

Among the most important products of the smooth endoplasmic reticulum are steroid hormones, including sex hormones, which are secreted from the cells into the bloodstream and play important roles in the body. These hormones are made of fatty molecules, and are thus produced in the smooth ER.

The ratio between the rough and smooth parts of the ER is often dictated by the type of cell in which these are located. For example, pancreatic cells, that mainly function in secretion of proteins such as insulin into the bloodstream as well as in secretion of enzymes into the digestive system, have a multitude of many rough ER organelles. In contrast, in testicular or ovarian cells, that express and secrete many steroid hormones, we will find more of the smooth ER. The same is true regarding liver cells that break down medicines and toxins, using a family of proteins that are mainly located in the smooth endoplasmic reticulum. 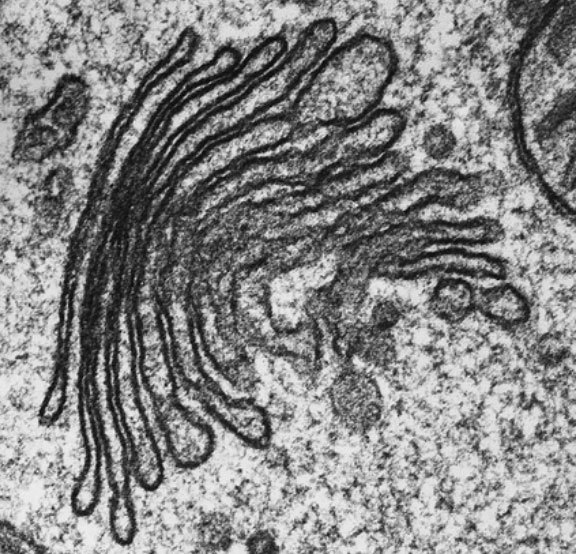 Golgi observed the organelle that now bears his name as early as 1898, but it was not until 1954 that electron microscope observations confirmed its existence as an independent organelle. Transmission electron microscope image of the Golgi apparatus | Biophoto Associates, Science Photo Library

Already back in 1898, Golgi was able to use a light microscope and sophisticated dyeing methods to observe the organelle that currently bears his name, but the debate as to whether it can be considered an independent organelle lasted for many more years. It wasn’t until 1954 that electron microscope observations finally confirmed its existence. It is the only cellular organelle named after a scientist.

When observing Golgi bodies under an electron microscope, they appear as flat pita bread, which are always located adjacent to the rough endoplasmic reticulum. But why specifically there? That is because these organelles are in charge of the sorting and of the final steps in the processing of proteins that are produced by the reticulum as well as in their transport to their final destination.

To clarify, we will follow the journey of a protein the final destination of which is one of the cell’s organelles. The protein is produced in the endoplasmic reticulum and is then transported to the Golgi. Within the Golgi it undergoes a series of modifications, such as the attachment of sugar molecules. These additions are essential to ensure that the proteins reach their destination and not a different location. At the end of the process the protein will reach the part of the Golgi that is farthest from the endoplasmic reticulum and from there it will be dispatched to its target organelle. The same process takes place when the protein is targeted to become exported outside the cell or to undergo integration into the cellular membrane. The amount and size of Golgi bodies in a cell is also dictated by the cell type. For example, B cells of the immune system, which express multiple antibodies, contain many Golgi bodies.

Thus, the endoplasmic reticulum and the Golgi apparatus are two important components in the complex and dynamic organelle system in the cells of living organisms. Taking place within them are the processes of production, regulation, sorting and transport of certain proteins and fat molecules to their final destination. They can in fact be viewed as a sort of factory that produces a wide variety of products and distributes them to their target destinations - the cell's production line.