The Superpowers of the Liver

It can easily break down toxins, store metals and vitamins and even regenerate after injury. Just be careful not to give it grapefruit juice

The liver is the largest gland in our body and can weigh up to 1.2-1.5 kilograms in an adult. Its shape is roughly triangular, and it is located in the abdomen, between the diaphragm and the stomach, on the right side of the body, behind the ribs. The liver serves as a type of a transit station between the digestive system and the bloodstream. While it performs over 500 different functions in our body, its main function is to regulate the levels of substances that reach the blood from the digestive system and to break down the toxic substances within them before they reach other organs. That is why about one-eighth of our blood volume is found in the liver at any given moment.

In addition to its role as an important transit station and a border control checkpoint, the liver also serves as a storage compartment, releasing different substances into the bloodstream when the need arises. These include metals such as copper or iron - which are essential for the production of new blood cells, as well as some types of vitamins such as vitamin A, vitamin D and vitamin B12. In addition, the liver is responsible for the production of bile, which is needed for the breakdown of fat and for the removal of waste from the body. The liver is also responsible for the production of cholesterol, the conversion of excess sugars into fat and for the breakdown of a variety of organic molecules, including drugs and toxins.

The Sophistication of Simplicity

Given its multiple functions, the structure of the liver is relatively simple: it is grossly divided into two main lobes, right and left. The lobes are usually divided into quarters, which are composed of many lobules (secondary lobes). A lobule is a tissue of liver cells, hexagonal in shape and 1-2.5 millimeters in size. Each vertex of such a hexagon contains an artery, a vein and a bile duct.

All of the organs in our body receive blood supply from the heart through the arteries and return the blood back to the heart through the veins, but the liver is exceptional in this sense, since it receives blood supply both from an artery and a vein, returning blood back to the heart via an additional vein. While the hepatic artery is used for transport of oxygen-rich blood from the heart to the liver, similar to the functions of arteries that serve other organs, the portal vein is no ordinary vein. Unlike most veins in our body, it does not carry blood back to the heart, but transports oxygen-poor blood from the intestines, rich in nutrients and possibly toxins, for processing in the liver. Only after its purification in the liver does this blood continue on its way to the heart, from which it is carried to the rest of the body.

In most organs, the more functions an organ fulfills - the more cell types it contains. In the circulatory system, for example, red blood cells carry oxigen, white blood cells are in charge of immune defense and platelets are responsible for blood clotting. In contrast to this, the liver, in spite of its multiple and diverse roles, is composed of a single cell type - liver cells, also known as Hepatocytes. 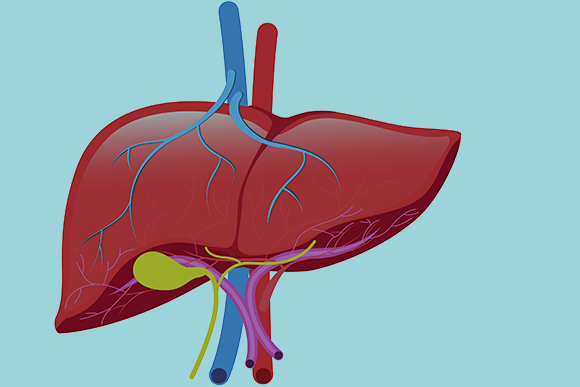 The liver is supplied by blood from both an artery and a vein, returning blood back to the heart through an additional vein. Image: OHishiapply Shutterstock

The liver has another extraordinary ability - it can regenerate. This ability was known already back in ancient Greece and is mentioned in the famous story of Prometheus. In Greek mythology it is said that the head of the gods, Zeus, sought to punish Prometheus for giving the gift of fire to humans. His punishment was that every day a vulture would devour his liver, but by the next day his liver would grow back, to be eaten again by the vulture.

Although this story has a kernel of truth in it, which is that the liver can indeed re-grow, the liver cannot regenerate perfectly. A perfect process of restorative regeneration of tissues, entails dedifferentiation of cells to a stem cell state, which enables reformation of the original tissue - as in the case lizard tail regeneration. In contrast, when part of the liver is lost, up to about half of its volume, due to injury or liver transplantation, existing liver cells divide into new cells, enabling the liver to reach its original volume. However, this type of regeneration is reparative - the unique configuration of the original tissue is not restored and blood vessels do not return to their original location. For this very reason it is also impossible to take liver tissue for transplantation from an area from which liver tissue has already been removed in the past.

The regeneration capacity of the liver has its drawbacks. Following repeated damage, in cases of alcoholism, consumption of certain medications, drug abuse, obesity or poisoning, the liver’s regeneration mechanism may become imbalanced. In this condition, termed liver cirrhosis, the regeneration mechanism becomes overactive and may result in replacement of healthy tissue with collagen-containing fibrous tissue. This process causes irreversible damage to liver functions, and thus, paradoxically, it is the liver’s regeneration capacity that prevents it from healing.

Without proper treatment, liver cirrhosis can develop into a severe and chronic illness and can even lead to death. One of its symptoms is jaundice, which in itself is not a disease, but a phenomenon caused by liver damage. Yellowing of the skin occurs when the liver stops processing the protein bilirubin, which accumulates in different tissues and confers yellowish pigmentation. 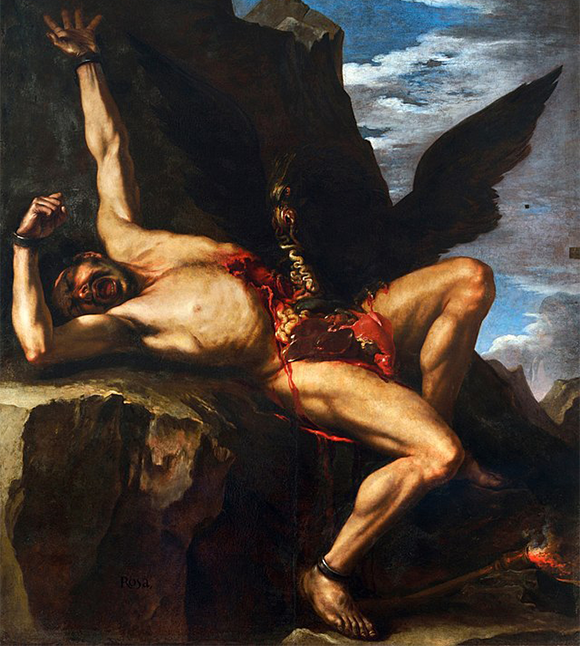 The liver has an exceptional ability - it can regenerate. Painting: The Torture of Prometheus (Salvator Rosa).

Medications and the Liver

An important activity of the liver is the breakdown and processing of toxins and drugs. Some drugs and toxins are removed by the liver by their attachment to proteins that eventually end up in the urine or feces and are thus removed from the body. Other drugs undergo activation following processing by the liver, as in the case of morphine, which is used as a strong painkiller, and is administered in an inactive form, to becomes active only upon processing within the liver.

This liver function is performed mainly by a family of enzymes (proteins that are able to perform cellular functions), which are called Cytochromes P450. The cytochrome p450 family metabolizes (breaks down) 95 percent of drugs in clinical use. The human genome sequencing project led to the identification of 57 genes that hold instructions for the production of such enzymes, which differ significantly in their levels of expression in different people.

These differences in expression levels constitute one of the main reasons for the differential effects of drugs on people: In people with high levels of liver enzymes a given drug will undergo faster breakdown, compared to its metabolism in people with lower levels of these enzymes. This situation has a substantial effect on the effective dosage of different drugs, as well as their safety, to the extent that people with low liver enzyme levels may suffer from toxicity even from drugs administered at moderate dosages.

Following repeated damage, the regeneration mechanisms of the liver may become unbalanced and result in liver cirrhosis. Image: eranicle Shutterstock

Liver enzymes have a surprising weakness - grapefruit juice. The juice can disable one of the most important conformations of liver enzymes and inactivate them completely, due to the presence of substances called furanocumarins. These substances also exist in other citrus fruit and some additional plant families, but their levels in grapefruit are especially high.

Grapefruit juice can block the action of intestinal CYP3A4, so instead of being metabolized, more of the drug enters the blood and stays in the body longer. The result: too much drug in your body.

When furanocoumarins reach the liver, they undergo breakdown and one of the resulting products gets lodged within the enzyme's processing mechanism, disabling its function. The inhibition of such an enzyme can delay the processing of many drugs by the liver, thus significantly elevating their effective toxicity. Thus, when taking certain types of medicines it is recommended to avoid grapefruit juice, in order to avoid overdosing. And thus, this magnificent biological machine, which saves us from toxins and enables us to make use of a variety of nourishing substances has an Achilles Heel - grapefruit juice. 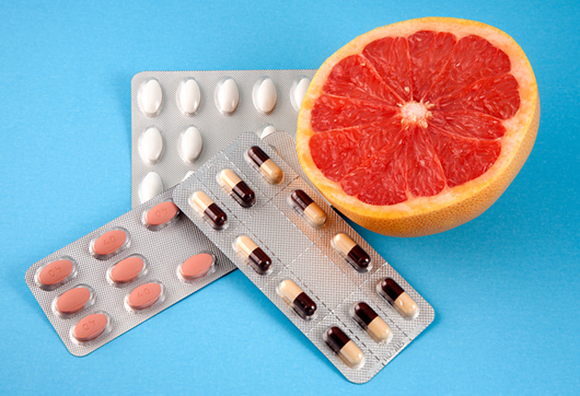