Parkinson’s Disease -
What Do We Know?

Although it is not yet clear what causes the degenerative process in dopamine-producing cells, which leads to Parkinson's Disease, our understanding of the course of this neurodegenerative condition is continuously advancing – as are the tools for treating it

The steady rise in the standard of living in developed countries, and especially, the dramatic advances that have taken place in medical knowledge in the last century, is also reflected in a significant increase in life expectancy. This positive trend also has an unfortunate side effect: the older people get, the greater the risk of developing diseases that are not common in younger populations, creating a growing problem that needs to be addressed.

A prominent example of this are neurodegenerative diseases - degenerative diseases of the nervous system. With the exception of certain areas of the brain, the nerve cells in our brain do not usually undergo regeneration. If these cells die, or if their function is impaired due to an illness, it is likely to lead to a decrease in brain function over time, that will lead to the appearance of symptoms that may very well impair daily life. This group of diseases includes, among others, Alzheimer’s disease, known mainly for the memory impairment it causes, ALS, a muscular dystrophy disease, and Parkinson’s disease (PD).

Parkinson’s disease is usually associated with old age, and its prevalence does increase with age. It affects about one percent of over 60s, and is five times more common than that above the age of 85. However, it sometimes occurs at a young age, and about ten percent of patients are diagnosed during the third or fourth decade of life. This type of Parkinson’s is called young-onset Parkinson's disease. 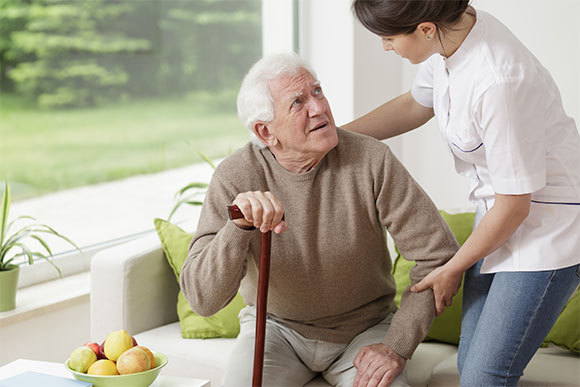 Parkinson’s disease is usually associated with old age, but sometimes afflicts young people. A woman assisting an elderly person in getting up | Source: Shutterstock, ESB Professional

The most well-known feature of Parkinson’s disease is muscular tremor. Other associated symptoms are slow movement, muscle stiffness and speech difficulties. Over time, Parkinson’s patients may also suffer from difficulties in sleeping or swallowing, depression, and, at more advanced stages, may also suffer from a deterioration in cognitive skills.

The cause of these symptoms is the death of nerve cells in an area of the brain termed the “substantia nigra”, Latin for “black substance”. These cells are responsible for the production of dopamine – one of the most common neurotransmitters in the brain, a molecule that enables nerve cells to communicate with one another. Dopamine is distributed by cells of the substantia nigra cells to other parts of the central nervous system.

Dopamine is central in many different brain functions, including the processing of experiences of pleasure, reward, addiction, movement and thought. The neural mechanism that is particularly affected by Parkinson’s disease is the one responsible for motor function.

It is hypothesized that the motor symptoms of Parkinson’s disease are due to the fact that shortage of dopamine disrupts the routine function of nerve cells in a region of the brain called the basal ganglia. These nuclei are clusters of nerve cells located deep in the brain and that communicate dynamically. This communication, in turn, is important for many different brain functions, such as short-term memory, decision making, motivation and movement.

It is further hypothesized that the shortage of dopamine created in this area in Parkinson’s patients, impedes the function of the Thalamus, another area of the brain that works as a kind of switchboard, regulating the flow of information between the different regions of the brain. Among other things, the thalamus relays sensory and motor information to parts of the cerebral cortex that control movement and send signals to the muscles as to when these should contract. When this communication is impaired, so is movement itself. 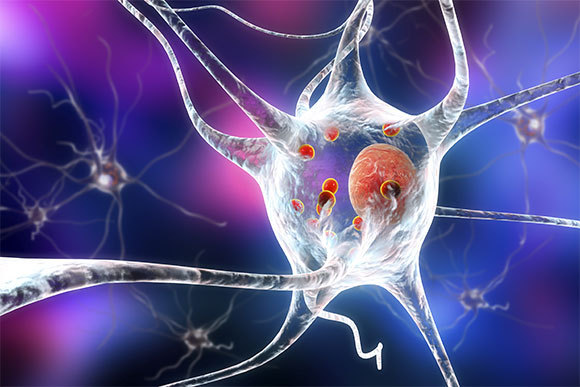 The disease is characterized by the formation of misfolded protein aggregates. “Lewy bodies” (red balls) inside a nerve cell | Illustrations: Kateryna Kon, Shutterstock

In the advanced stages of the disease, many patients will also suffer from deterioration of cognitive skills, even to the point of dementia. This phenomenon in Parkinson’s patients is associated with the formation of protein aggregates inside brain nerve cells, which form inclusion bodies called “Lewy bodies”. Lewy bodies consist of misfolded proteins, mainly the α-synuclein protein, which usually assists neural communication, and even affects the production and release of dopamine. Dementia caused under these circumstances may also be accompanied by hallucinations.

The factors responsible for the degeneration of nerve cells within the substantia nigra have not yet been completely elucidated. Parkinson’s disease is known to be slightly more prevalent in men than in women. The disease is also known to have a genetic component, which is especially noticeable in patients with early onset of the disease. About 15 percent of Parkinson’s patients have a familial affinity to another patient, probably due to common mutations in certain genes. One of these is the SNCA gene, which encodes the α-synuclein protein. Since this protein is known to be associated with the formation of Lewy bodies, it is reasonable to speculate that a defect in its function (due to a mutation in the gene encoding it) could be linked to Parkinson’s disease, and this hypothesis is indeed supported by research studies.

Although we currently have no way to cure the disease, many existing treatments help Parkinson’s patients to function well by reducing the extent of their motor symptoms. Medication treatments are based on different ways of compensating for the shortage of dopamine in the brain. The most common medications are those based on Levodopa or L-dopa molecules, that convert into dopamine in the brain. Other drugs mimic the action of dopamine in the brain (Dopamine agonists), or inhibit the natural breakdown of existing dopamine, thereby prolonging its duration of action (MAO-B inhibitors). These medications can have unpleasant side effects such as nausea, behavioral changes and even hallucinations. 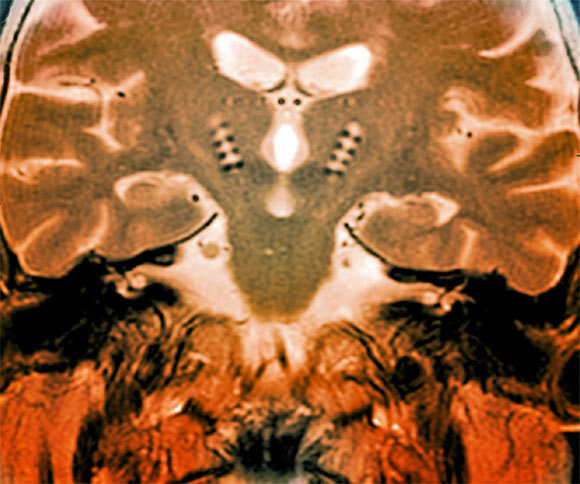 Direct electrical stimulation of the brain can reduce some of the disease’s symptoms. Electrodes in a Parkinson’s patient’s brain | Source: Zephyr / Science Photo Library

In severe cases of Parkinson’s, or in cases where medications cannot successfully stabilize the patient’s condition or cause serious side effects, deep brain stimulation may be considered. This treatment involves brain implantation of an electrode that stimulates areas of the brain functioning abnormally. This invasive treatment is effective in reducing the motor symptoms characteristic of the disease, but the underlying mechanism is still not entirely clear. The electrical stimulus seems to suppress the activity of certain nerve cells in the area in which it is implanted and probably also stimulates the activity of other nerve cells.

Beyond the pharmacological treatments, it is recommended that patients with Parkinson’s engage in strenuous physical activity and daily exercise.  Studies show that such activity is associated with suspension of the progression of the disease and with reduction in the extent of its motor symptoms. In general, physical activity contributes by improving mood, which is also important for Parkinson’s patients, who may suffer from mental distress due to their condition. The physical activity should be carefully selected and planned according to the individual characteristics of each patient.

In addition to the treatments available for those already suffering from Parkinson’s disease, considerable efforts are being made to develop a vaccine for Parkinson’s disease that could serve as a treatment for patients, and perhaps even altogether prevent its onset. Such a vaccine, which is currently already in preliminary clinical trials, is designed to train the body to cope with α-synuclein inclusion bodies.

The vaccine mechanism is supposed to teach the body to form antibodies that will recognize such aggregates and aid the brain in clearing them before they can impair its function. This is a relatively new approach, and there is no certainty that it will mature into a practical treatment. However, if this vaccine safely succeeds in overcoming all the obstacles, we may, for the first time, have a vaccine for a neurodegenerative brain disease.

Our understanding of Parkinson’s disease, its characteristics and circumstances of development, keeps improving with time, thanks to extensive research carried out in this field. New treatments improve patients’ lives and new experimental treatments are constantly being developed. Given the increase in life expectancy, it is more important than ever to keep exploring this disease in depth. With the advance of technology and medicine, researchers continue to assess new approaches, such as vaccines. Hopefully, the future will bring further improvements, and we will be able to better predict disease onset, treat it, and possibly even cure it.