Disposable plastic utensils or reusable products? Surprisingly, it is difficult to assess which of the two exerts a higher environmental toll. One thing is certain - using existing products is better than manufacturing new ones.

New taxes on disposable plastic tableware and bans on single-use cutlery have recently been imposed in various countries around the globe and most recently in Israel. The aim of reducing the consumption and usage of polluting plastic products and encouraging the use of reusable products seems obvious. But are reusables necessarily more environmentally friendly?

Many researchers have tried to calculate the amount of natural resources required for the production of specific products, with the goal of assessing which products are more environmentally friendly. The environmental cost can be calculated in several ways. One of these is by calculating a product’s ecological footprint (EF), defined as the environmental effect of the manufacturing process of a product as well as of its consequent usage and disposal. In short, it is a measure of the human impact on the environment. The calculation takes into account the raw materials from which a product is made, as well as the additional materials and resources required for its delivery to the consumer. The resulting index can be compared to the amount of natural resources available, so as to estimate the extent of its impact on the environment. 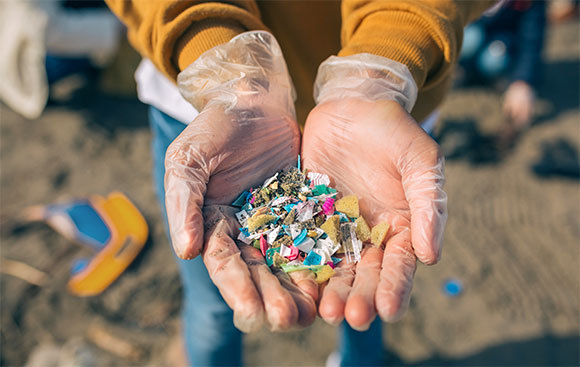 The Harm Caused by Plastic

Most of the plastic produced in the world is used for making disposable products, such as packaging or single-use cutlery. The starting raw material is usually crude oil (petroleum) that has undergone a process of polymerization, in which long chains, consisting of repeating units of the same molecule, are formed. Petroleum has many uses other than the production of plastics, which account for only 4-6% of the global petroleum consumption. However, crude oil is a natural resource with such a low rate of regeneration, that it is safe to say, from a practical point of view, that it is virtually non-renewable. At the current rate of utilization, the known global oil reserves will become depleted within a few decades.

What happens after the plastic produced has already been used? During the process of plastic production, other substances, such as phthalates and bisphenols, are usually added, creating new molecules or mixtures that possess qualities desirable to manufacturers. The big problem with plastic is that once the product is discarded, there are hardly any natural means or processes capable of degrading the synthetic polymer chains. In other words, plastic is basically not biodegradable. Even the bacteria that are capable of degrading plastic require very special conditions and a very long period of time. The natural decomposition process of plastic can last centuries.

In the meantime, plastic physically degrades into smaller fragments and particles called microplastics, which pollute and harm ecosystems and water sources around the world. It is therefore crucial to find solutions for the enormous amounts of cumulative plastic waste piling up. One known method to deal with plastic is by recycling, but this process also entails an environmental toll, as it requires infrastructure that consumes oil as well as other fuels and causes emission of more pollutants. The extent to which this process is environmentally beneficial is therefore unclear. Non-recyclable types of plastic are generally either sent to landfills or to incineration, or eventually wind up in the natural environment. All of these outcomes entail various degrees of environmental damage. 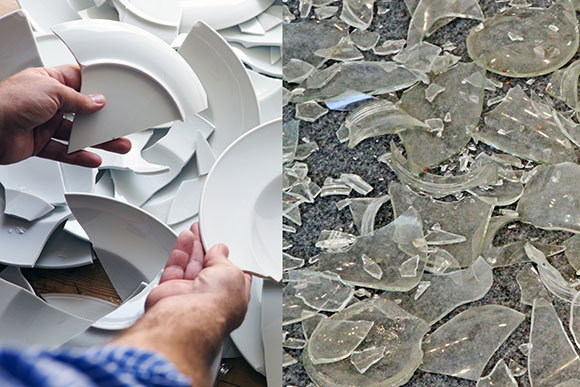 The manufacture of recycled glass is cheaper than production of new glass, since the melting temperature required for the recycling is much lower than that required to melt raw sand | Photo: wernimages and Shutterstock ChiccoDodiFC

Glass is primarily made of sand. For the production of glass, sand is mixed with sodium carbonate and calcium oxide (lime) and is heated at an extremely high temperature. Sand is the world’s most consumed raw material after water – it is used for building houses and infrastructure and even for the manufacture of electronic components and devices. However, the relative role of glass in the exploitation of the world’s sand resources is quite marginal.

Perhaps surprisingly, sand is also a limited resource and today we are experiencing a global shortage of sand. Most of the sand available for use in the world comes from rivers and coastal areas. Its mining incurs widespread environmental consequences, as it affects groundwater levels and water currents in rivers and along beaches, leads to the erosion of riverbanks and the deepening of river beds, destroys the ocean floor or river floor habitats, affecting their biodiversity, harms plants and animals and cuts away at the habitats of endangered species.

On the bright side, glass is one of the only materials that can be recycled over and over again without loss in quality. Another consideration is that production of recycled glass is cheaper than the manufacture of new glass, since the melting temperature required for the recycling process is much lower than that required to melt raw sand into glass.

What really happens to the plastic you throw away? | Ted Ed Emma Bryce

While the raw material a product is made of is a crucial component in the calculation of the product’s environmental cost, it is by far not the only factor to be considered. An additional parameter that must be taken into account is the fact that after we eat using reusable plates and cutlery, we wash them using soap and water, or, if we use a dishwasher, its power consumption should also be considered. By contrast, after eating with disposable food utensils, we discard these into the trash bin, implying thus that we consume many more utensils as well as slightly increase the consumption of garbage bags.

An additional important consideration is the effectiveness of a product. When a product we have purchased happens to be faulty or unsuitable for our needs, we will likely use it only a few times before discarding it, such as in the case of a leaky drinking bottle. A product that was purchased with the intent of reusing it, but was in fact only used a few times, could be much more polluting than similar disposable products that will be used for the same purposes.

That is where the durability of a product also comes into play. For example, the lifespan of delicate and fragile glassware can be much shorter than might generally be expected from a reusable product, same as reusable bags that get torn after having been used too many times. We also have to consider the amounts of disposable products that do not reach the trash bin but are forgotten at a picnic and get blown away by the wind, ending up in places in which they harm the ecosystem. It is difficult to formulate a method that will take into account all the aforementioned factors and calculate the preferable solution. 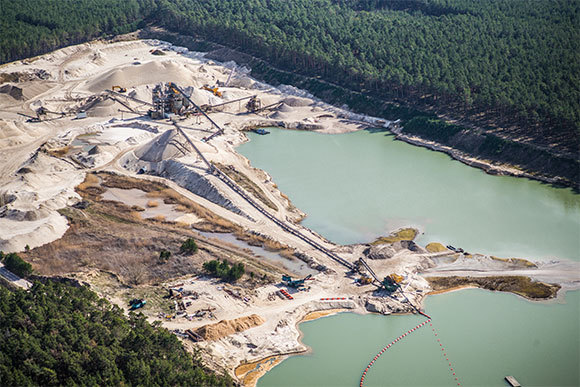 Most of the sand available for use today comes from rivers and coastal regions. Sand mining has environmental ramifications | Photo: Mario Hagen Shutterstock

In an interview to the Davidson Institute of Science Education website, Dr. Hagit Ulanovsky, an expert on environmental health and risk management at SP-Interface, an Israeli initiative aimed at linking science and policy, explained that an additional level of complexity in calculating the environmental toll is the fact that it is expected to vary from place to place around the world. In Israel, for example, most domestic wastewater, including the water used for dishwashing, undergoes purifying treatment and is sent for reuse in agriculture. In contrast, in countries in which sewage undergoes only partial treatment, there is greater concern that polluting cleaning agents could reach the natural environment.

Another example are regions suffering from shortage of drinking water. Since water is more difficult to transport compared to consumer goods, in places such as these disposable tableware may offer a more effective solution than reusable plates and cutlery that require daily washing. Another confounding factor in calculating the environmental toll is the global economy, since the main damage to the environment often occurs in a place different from the one in which the product is consumed. 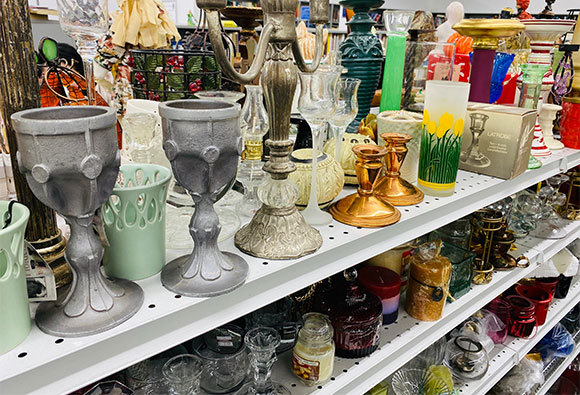 The most environmentally-friendly products are ones that already exist somewhere in the world | Photo: ZikG Shutterstock

So Which is Preferable?

Trying to calculate the amount of resources needed to manufacture a product is a complicated task, requiring many assumptions and speculation. It is therefore not clear whether a reliable and realistic answer can be given to the question “Which pollutes more?”, as it is almost impossible to determine unequivocally whether disposable or reusable utensils are preferable.