Rain and Love are in the Air

The season’s first rainfall breathes life into nature, dispelling the long dryness of summer. Plants regain their green color, snails interpret the first rain as the cue for finding a mate, and ants spread their wings on their nuptial flight – the first and only time they will meet their mates

In some of the world’s regions, there is no dry season; no national anxiety over draught or the possibility of it; nor do people get excited over raindrops. But for the residents of Israel, the first rainfall of the season is a special event. The early rains bring with them a slew of promises: Soon, the seeds sown last year will germinate and tubers will sprout leaves, the landscape will be covered in green, the autumn-flowering bulbs will bloom, and we begin another short yet vital winter. But in addition to the long-term processes put into motion by the first rain, some creatures respond to it almost immediately.

The first showers of the season come down on vistas of mostly dead and dry plants. Theoretically, there is no reason for dead organisms to respond to rain (or to anything else for that matter), but there are a few exceptions. The True Rose of Jericho, an annual plant that grows in the Israeli Negev, passes the summer with its branches tightly curled inwards. This enables the plant to protect the fruits, which are located at the tips of the branches, from hungry birds and rodents. The rainwater is absorbed by the dead plant’s branches, accumulating in the plant’s tissues and generating a pressure that forces the branches to uncurl and separate. Within an hour, the branches are fully spread out, enabling the raindrops to scatter the seeds, just in time for germination.

This phenomenon is not restricted to desert plants. The annual clary sage, for example, grows in northern and central Israel. During the summer, closed calyces containing its ripe fruit line the dry stalks. Minutes after the first raindrops moisten the plant, the clary sticks out its calyces so that they are perpendicular to the stalk. In this position, the calyces open and the seeds within are ready for dispersal.

Some plants go even further and really “rise from the dead.” During the dry season, different moss plants dry up almost completely, allowing their metabolism and other vital processes to slow down to a minimum – and the mosses barely show any signs of life. However, within minutes of becoming drenched, these tiny plants are revived and resume their activity at the point in which it stopped last spring. Other plants are also capable of pulling off this trick: The fern called rustyback, common in mountainous regions, appears to be completely dry during the summer. The fern’s leaves are rolled up, presenting their bottom side, which is covered in scales that protect the slumbering plant from the effects of the weather. When the rustyback gets wet, the leaves fill with water, straighten and show their green side again, and once again look alive and fresh. This is how mosses and the rustyback fern utilize short periods of wetness in habitats that tend to dry up quickly.

True Rose of Jericho before and after getting wet. Igor Armiach Steinpress 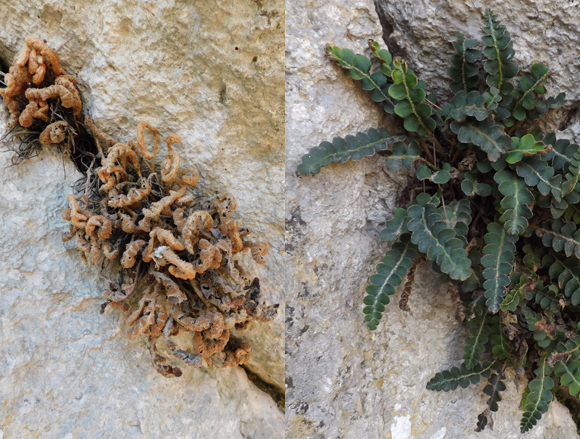 A Time to Love

Many animals also increase their activity after the first rain. Ladybugs and terrestrial crabs wander out to the damp earth, and the first puddles feature numerous tiny arthropods called springtails, which appear as blue or purple powder on the water’s surface. But perhaps most impressive is the phenomenon of creatures that take advantage of this special occasion to coordinate the creation of the next generation.

Prominent among these are the land snails, coming out of their estivation by the tens of thousands. One of the largest and most common of the land snails is the Helix engaddensis (or field snail). Unlike its smaller kin, which spend the summer on plants and fences, the field snail goes underground. Once the earth is wet, the snails come up into the open air and quickly turn to courting and mating.

The snails of this species are hermaphrodites: Each individual has both male and female reproductive organs, but cannot fertilize itself and thus seeks a mating partner. Courting lasts hours, during which the snails physically interact, touching each other with their tentacles and pressing their muscular ventral feet (their “underbellies” on which they move) together. During this phase, the pair may assume a vertical position.

In the final stage of courtship and before mating, the snails “stab” one another using sharp calcareous darts termed “love darts,” which are formed by the reproductive system in sexually mature animals. The love darts are coated by mucus enriched with hormone-like molecules, which render the stabbed snail less hostile towards its partner’s sperm. Several hours after the season’s first rainfall, pairs of snails dot the open field, but typically they are seen in clusters of many individuals, making it difficult to figure out just who is mating with whom. After the mating ceremony is over, the snails lay their eggs in the ground, and just like that, their parental duties are over. 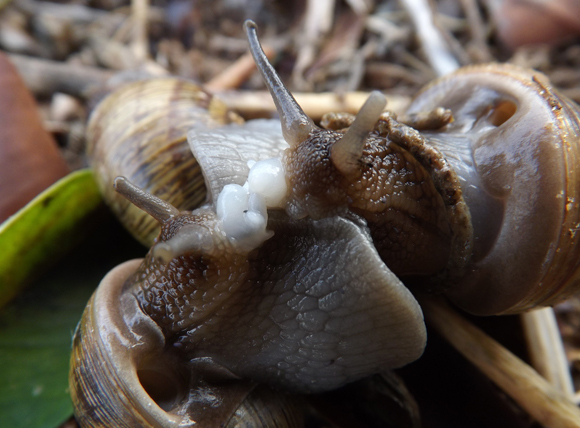 Another impressive phenomenon triggered by the first rainfall is the nuptial flight. Two species, which are not closely related but have a similar lifestyle, exhibit this behavior: Termites and ants. Just wait until the clouds disperse after the first downpour to see them in the air: Swarms of beautiful insects flying clumsily in the sunlight. These are the reproducing individuals; the ‘princes’ and ‘princesses’ and the only ones in the colony who possess wings. Since the reproducing individuals emerge once or twice a year, it is crucial that the nuptial flight is ‘coordinated’ with other colonies of the same species, to ensure a mate can be found.

Not all ant and termite species coordinate their nuptial flight with the first rain, but those who do include several remarkable representatives, such as the Messor ant. These commonly found ants establish colonies of up to tens of thousands of worker ants. For most of the year, only the wingless worker ants are seen, entering and leaving the colony. But several hours after the first rain, the extensive exposed ground area surrounding each colony becomes an airstrip for thousands of reproducing individuals. They board the airstrip all at once, before embarking on their nuptial flight, their fluttering wings tinting the colony’s surroundings silver. Ants are not good fliers and do not have the opportunity to practice their flight skills, as they only fly a few times, and in some cases, only once, throughout their lives. They thus prefer to take off from a high point and during their flight, land on other tall objects, such as people. Once the winged female has flown far enough from the colony, she will look for a gathering of ants from different colonies, and there she will mate with several males. Promptly after the mating, the male, having fulfilled his duty, dies, and the female sheds her wings (sometimes pulling them off herself) and turns to search for a location for a new colony where she will be queen.

Of the swarm of winged ants that flew out of the colony, only a few females, sometimes even only one, survive the first few days out on their own. An ant that made it to mating will never leave the colony again, dedicating the rest of her life to egg-laying. All the workers and all ‘princes’ and ‘princesses’ who will leave the new colony will be the offspring of the males that the female mated with during her nuptial flight. 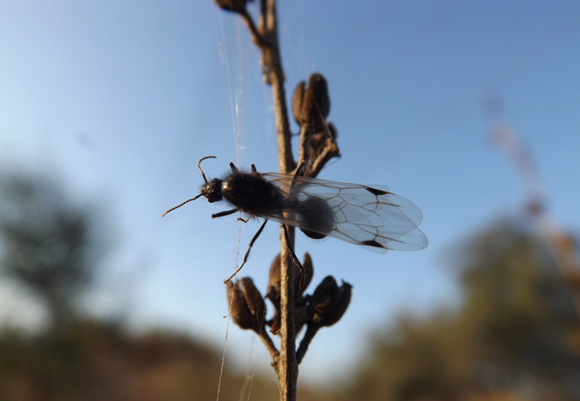 All these processes will unfold throughout the early rainy days of the fall, in parallel to the beginning of plants’ germination and flowering in the fields. Slowly, with the drop in temperatures and increase in rain intensity, fall activity will be replaced by winter activity. Soon, the young snails will hatch from the eggs their parents had laid and emerge from the damp earth. Young queen ants will raise their first generation of offspring. Growth and development will replace the reawakening and the mating. All of these remind us that the many changes in nature brought on by the first rain are just the beginning of the rainy season.