The Amazing Math
of Potato Chips

We all like playing with our food - especially when it’s Pringles. Let’s discuss the mathematical properties of the snack

Remember how in school, preparing for a field trip, you would wander the aisles of a supermarket in search of the perfect snack, and would eventually end up choosing a hyperbolic paraboloid? Or in other words, Pringles potato chips? 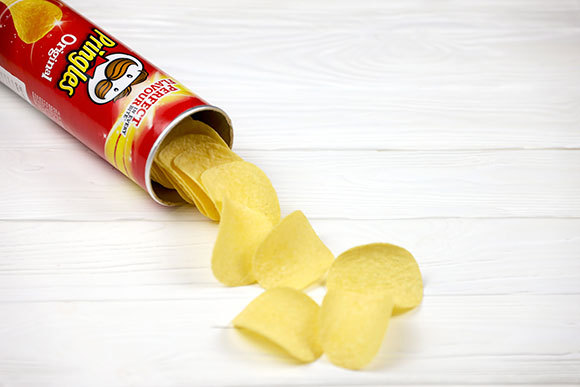 Which snack would you like? How about a hyperbolic paraboloid? Pringles potato chips | Shutterstock, Mehaniq

The very particular shape of this snack has some interesting, carefully chosen features. Among other things, these features allow the snack to pass through an opening that at a first glance seems too narrow, as demonstrated by the popular science educator Kyle Hill on her Twitter account:

As can be seen in the video, the piece of chips, with curves that endow it with a clear three dimensional appearance, somehow manages to pass through an opening that is about as thick as the piece of chips when flattened. 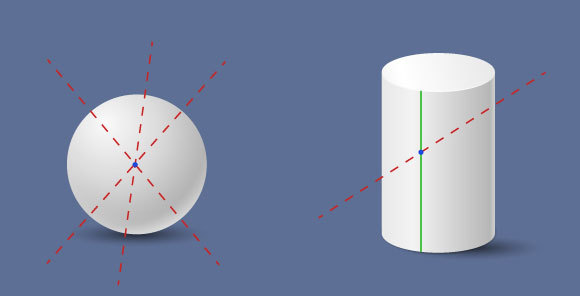 What is special about a ruled surface? You can draw multiple straight lines through the blue dot depicted on the surface of the cylinder. Most of the lines we draw will not lie on the cylinder’s surface, such as the red line. But since the cylinder is a ruled surface, we will be able to draw at least one line at any point on its surface, such that it will lie on the cylinder’s surface, depicted by the green line in the image. In contrast, we will not be able to find any such line on the sphere. | Artishok, Shutterstock, Aleksandr Semenov, Maria Gorohovsky

The property of a ruled surface is also characteristic of more complex forms, for example a flat Möbius strip - a strip created from a long and flat strip of paper, in which one end is turned by 180 degrees and attached to its counterpart. Returning to the example with which we started, a hyperbolic paraboloid is also a ruled surface. A hyperbolic paraboloid is a geometric surface reminiscent of a horse's saddle, and the potato chip is shaped as a segment of it. 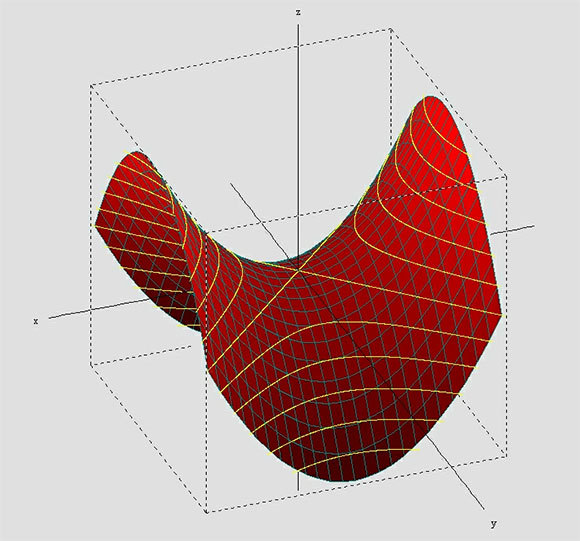 Since the potato chip, the hyperbolic paraboloid, is a ruled surface, it is possible to draw a straight line at any point on it, such that the line will lie on its surface (in fact, a hyperbolic paraboloid is a double ruled surface, which implies that two different lines can fulfill the condition at each point - one, however, is sufficient for our purpose). As a result we can start sliding the chip into the narrow opening while turning, such that each time there is a straight line on the chip that is oriented towards the opening. Any line of points on the chip that passes through the opening is a straight line.

In this video we can see how by drawing only straight lines, in three dimensions, we can create a hyperbolic paraboloid:

Why Hyperbolic Paraboloids Do Not Crumble?

The shape of the potato chip was not chosen so as to be entertaining as well as counterintuitive to pass it through narrow slits. It has other useful qualities.

As stated, the potato chip is a hyperbolic paraboloid, a type of paraboloid. A paraboloid is a geometrical surface in which each cross section is a parabola, an equation where the variable changes at a power of two (such as: y = a + bx + cx^2).

A hyperbolic paraboloid is defined by three variables: x, y and z, according to the equation: z = {{{y^2}\over b} – {{x^2} \over a}}, where a and b are positive numbers. The three variables represent the three dimensions of a space: the length, the height and the width. While a hyperbolic paraboloid is a two dimensional surface, it “requires” a three dimensional space to curve through, according to the equation. To identify the parabolas that hide within the surface, all we have to notice is that for y=0 we get (z=-{{x^2} \over a}\), that is to say a “frowning” arc-shaped parabola, while for x=0 we get (z={{y^2} \over b}\), a “smiling” U-shaped parabola. Both of these parabolas are two-dimensional and are commonly known forms of quadratic equations.

The two parabolas, which are oriented in opposite directions, endow the hyperbolic paraboloid with its saddle shape. 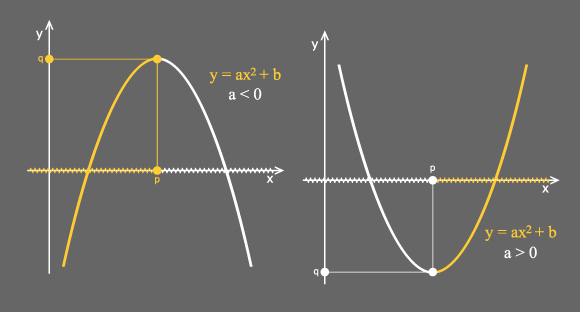 Two parabolas opposite in directions, hide within the surface of a hyperbolic paraboloid | Shutterstock, matma

The saddle shape creates a saddle point at the center of the snack. To demonstrate this point, if we take an imaginary Pringles chip and look along its length, we will see a minimum point at the center of the U-shaped convex line. However, if we look along the width of the chip, we will see that that same point is the maximum point of the arc-shaped concave width line.

A saddle point is a stable point at which the slope reaches zero, although it is not the minimum or the maximum point of the surface. Different factors can affect a shape’s fragility, including its geometry. A saddle point is one of the factors that make an object less fragile: it makes it harder for cracks and fractures to form. No one wants a snack that crumbles easily. Besides, this shape is convenient for compact packaging, since the individual chips fit tightly on top of one another.

Who would have thought that snack design is a job for mathematicians?