An Explosion
of Life

About half a billion years ago life on Earth changed dramatically within a relatively short period of time with the appearance of an enormous number of new species. How did the Cambrian explosion occur, why did it come to an end, and how much does it affect life today?

During the Cambrian Period, which began about 541 million years ago and ended about 485 million years ago, a sudden wave of rapid increase in the diversity of biological species took place in Earth’s ancient oceans. This event, known as the Cambrian Explosion, is considered so significant that it is sometimes referred to it as the Biological Big Bang.

A myriad of particularly diverse fossils of marine organisms from this period have been discovered, including the ancient ancestors of many groups, such as the chordates, which also includes us humans. During this “explosion” various anatomical innovations, some of which exist in modern biological systems, appeared for the first time. For example, the appearance of arthropods, with compound legs and eyes, or worms with gills.

This extraordinarily wide diversity also led to the appearance of the first predatory species, since up until this point in time we know only of gatherers, not hunters, which fed on unicellular algae and bacteria. These predators had jaws and teeth - an innovation that had not been observed previously - and they exhibited a well-developed swimming ability, which allowed them to hunt and prey.

The geological period that preceded the Cambrian and began about 635 million years ago is called the Ediacaran. During this period the amount of free oxygen on Earth increased significantly, probably due to rising temperatures that led to the retreat of ice caps and glaciers. The newly developed conditions allowed unicellular algae to thrive, and the algae, in turn, performed photosynthesis - a process during which they absorb carbon dioxide and water from the environment and use the sun’s energy to produce sugars. The byproduct of this process is oxygen, which is released into the atmosphere.

Fossilized remains of multicellular organisms that resemble jellyfish, worms and sponges have been found in geological layers from the Ediacaran Period. Such fossils have been found on all continents except Antarctica. Researchers hypothesized that these organisms disappeared from the world after the Ediacaran, and they were considered an evolutionary failure. Nevertheless, Cambrian fossils that were found in southern Australia included multicellular organisms identical to those from the Ediacaran Period.

But the fact that species from the Ediacaran Period continued to exist later on is insufficient to prove that they are the evolutionary origin of organisms characteristic of the Cambrian explosion.  In a study published in 2018 in Science, researchers from Australia, in collaboration with colleagues from Russia and Germany, demonstrated the presence of animals in the Ediacaran Period from whom additional organisms evolved during the Cambrian Period. The researchers characterized the organic molecules from a well-preserved fossil of Dickinsonia, a round, flat, multicellular organism; one of these molecules turned out to be cholesterol - a hallmark of modern organisms. This represents strong evidence indicating that organisms from the Cambrian, and their modern descendents, are a direct evolutionary continuation of earlier organisms from the Ediacaran Period.

In fact, there are documented findings of sponge-like fossils from as far back as 760 million years ago, the Cryogenian Period, which preceded the Ediacaran Period. This period preceded the global warming that facilitated the increase in oxygen concentration, but researchers have yet been unable to  prove that these fossils were in fact animals.

This is how they proved that Dicksonia is an animal - a video from the Australian National University:

The “Fuse” that Led to the Explosion

Researchers believe that the Earth was formed about 4.6 billion years ago, but until about 600 million years ago evolution progressed at a slow pace, and the only living organisms were bacteria, plankton and unicellular algae. During the Cambrian explosion the trend suddenly changed, leading to the greatest and most significant evolution of organismal diversity and complexity on Earth.

It’s hard to put a finger on the specific factors that led to the explosion, but many researchers believe that the main reason for it was the increase in the levels of atmospheric oxygen during this period. In a study conducted by an international team led by researchers from the University of Tasmania in Australia, researchers measured the presence of trace elements in nearly two thousand rocks of pyrite, a mineral known as “fool’s gold”. These measurements enabled them to estimate how much oxygen and nutrients were on Earth in its distant past. Some of these elements, such as selenium (Se), are very sensitive to oxygen and tend to react with it, such that changes in the level of oxygen lead to the formation of other compounds that become preserved in sedimentary pyrite for billions of years. Thus, analysis of sedimentary pyrite composition makes it possible to estimate the levels of atmospheric oxygen at the time of formation of the pyrite sediment.

The increase in oxygen concentration may have been caused by the movement of tectonic plates, which led to widespread volcanic activity and earthquakes that mixed the sea water and enriched it with oxygen. Moreover, the earthquakes and volcanic activity likely produced a harsh living environment, which encouraged biological adaptations, thus increasing the ability of certain organisms to survive.

Biological processes can occur even in the absence of oxygen, for example, they can use carbon dioxide, sulfurous molecules or ferrous minerals (minerals containing iron), but oxygen has an advantage - it allows the cell to produce much more energy and is therefore important for the operation of complex systems that consume large amounts of energy.

The increase in oxygen likely stemmed from increased activity of unicellular algae. These algae thrived, as mentioned, due to the rising temperatures during this period that led to melting of ice caps and glaciers. The melting ice caps released many nutrients into the water, which, in combination with the agreeable temperature, likely contributed to the significant growth of the algae.

Today too, oxygen-depleted regions in modern seas around the globe can teach us about the ecology that prevailed here in ancient times. In a study published in 2013, researchers from Harvard University in the U.S. examined the link between oxygen levels and animal evolution by analyzing information gathered on polychaete worms in oxygen minimum zones found in the seabed. They found that in places where the oxygen levels remain below 0.5% of average global sea surface concentrations, the main species are tiny worms that feed directly on unicellular organisms. In places where sea-floor concentrations of oxygen are between 0.5-3% of its sea surface levels, a greater diversity of species can be found, but their food web remains simple and is based primarily on unicellular organisms. Only at higher oxygen levels can carnivorous predators be found, with the food web branching out and increasing in complexity. 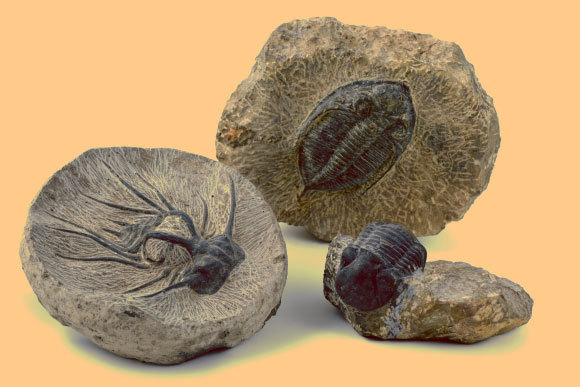 Life in the Cambrian Period

The best known animals from the Cambrian Period are the trilobites, arthropods with a hard shell, head and legs. Over 20 thousand species of trilobites are known today. Some of them had eyes, some were carnivorous predators and others fed on decaying matter or unicellular algae.

A particularly interesting animal identified with the Cambrian Period is  the Anomalocaris. Many researchers believe that it was the apex predator of its time. It was nearly one meter in length, which may not sound like much, but it was enough to make it the largest animal we know from the Cambrian Period. The shape of Anomalocaris resembled a shrimp, with a long tail, two spiny front legs and a square mouth full of teeth. It had highly developed compound eyes that resemble those of modern-day arthropods. 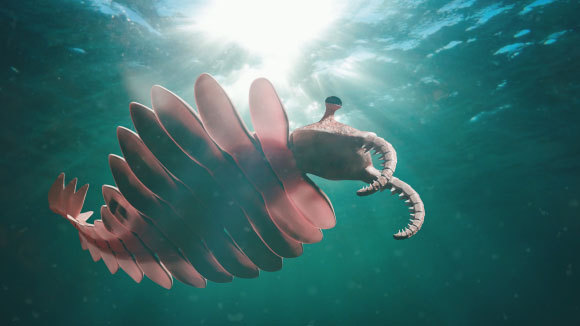 The Cambrian explosion also brought the diverse phylum, Echinodermata, to the world; this phylum includes starfish, sea cucumbers, and sea urchins. The most ancient fossil from this group is Helicocystis, which comes from the Cambrian. Researchers determined that it is an animal belonging to Echinodermata, due to its pentaradial symmetry, in other words, it comprises five main segments and skeletal plates, similar to those that characterize animals from this phylum. The fossil that was discovered resembles a sea urchin, but it’s different from its relatives, the starfish, since the five segments comprising it are joined to each other

The name Helicocystis comes from the word ‘helix’, which means ‘spiral’, since its five plates are arranged in a spiral fashion. Its appearance was not particularly impressive: its length did not exceed 5 cm and it was attached to the seabed by a small stalk, but its resemblance to modern-day echinoderms make it an important piece of the evolutionary puzzle.

Finally, Pikaia gracilens, which lived 505 million years ago, at the peak of the Cambrian Period, is the most ancient vertebrate known to man. Many researchers believe that it was preceded by other vertebrates, but since vertebrates have a soft, armorless body they are not particularly well preserved in fossils. To date, Pikaia fossils have been found only in Canada, and as long as no older fossil is found, Pikaia is considered the earliest ancestor of vertebrates, which include birds, reptiles, bony fish and mammals, including humans. 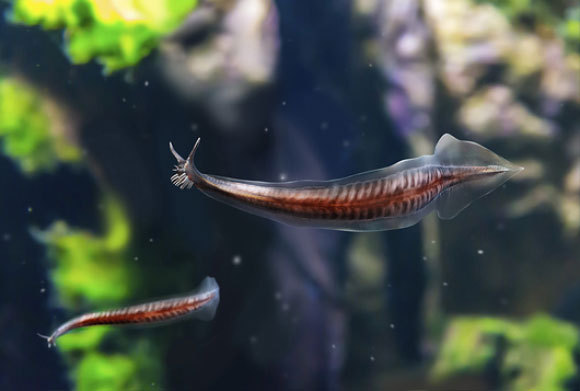 The End of the Party

The Cambrian Period likely ended with a sudden mass extinction event that led to the disappearance of many species of trilobites. Researchers believe that the reason for the sudden extinction was a decline in oxygen and the formation of toxic sulfur containing compounds (sulfides).

In 2011, researchers from the U.S. reported that in rocks from the Late Cambrian Period they had found characteristics similar to those of modern-day oxygen-poor marine environments, such as the Black Sea. This finding is based on rock samples gathered from locations that are very isolated from one another, which may indicate a global phenomenon during that period. The reason for the sharp decline in atmospheric oxygen concentrations is unknown and it is a question that continues to intrigue the scientific world. The animals that survived the mass extinction are the forebears of all of the biological systems known to us today. 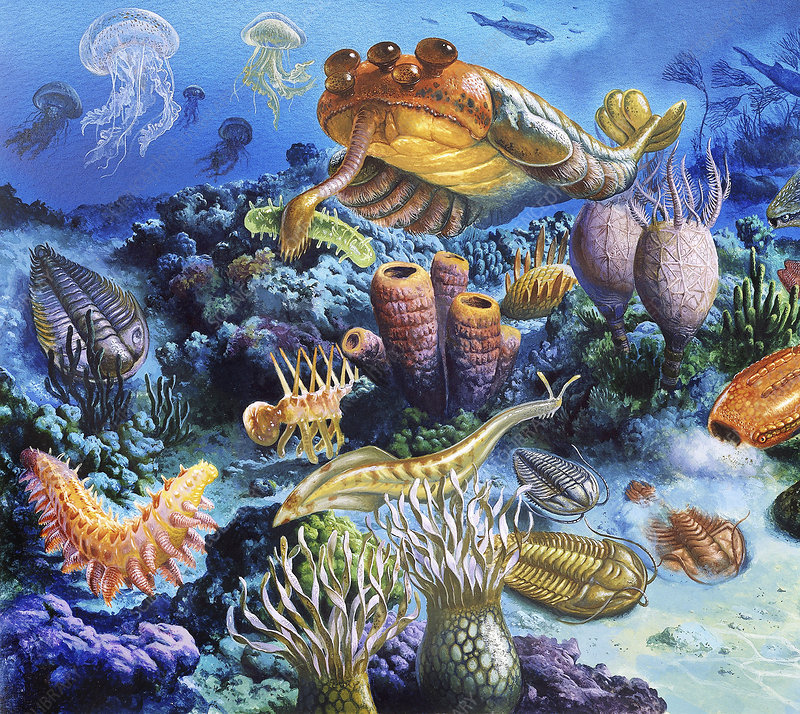 In the Cambrian Period there was an explosion of life on a scale never observed before or after on Earth. From a biologically poor world, which consisted mainly of unicellular organisms and simple animals that fed on them, a complex biological and ecological system including hundreds of thousands of species evolved.

We can only guess what was the composition of the marine population in those days, what these organisms looked like, what they ate and what caused the mass extinction of most of them, but we will probably never know exactly what happened. Our hypotheses are based mainly on indirect information, which may be affected by many variables. There may have been many species of armorless invertebrates before the Cambrian explosion, but they left no geological imprint, since soft biological organs are preserved far less well than hard shells and carapaces.

If so, perhaps the Cambrian explosion was simply a period during which hard carapaces evolved. Since we depend on information collected from fossil remains, we may erroneously believe that this period represented a Biological Big Bang. However, special conditions such as ancient mudslides have managed to preserve soft biological tissues and forms, and these can be used to learn a lot about the soft organisms of the ancient world, but even so, these findings are rare. Thus, with the scientific tools available to us today, we can at least gain a limited glimpse of that same dynamic, primordial period that was, put simply, an “explosion” of life.