Why is Australia Burning?

A combination of dryness, extreme heat, and cyclic natural phenomena in the Indian Ocean has coincided with global climate change to cause an unprecedented wave of wildfires

Since August, huge wildfires have been raging across southeastern Australia with unprecedented ferocity. So far, the fires ravaged more than 63 thousand square kilometers – an area greater than the entire State of Israel.

The fires have occurred mostly close to the coastal strip of the states of Queensland and New South Wales, mountainous regions renowned for their dense eucalyptus forests. Aside from bushland, hundreds of houses have also gone up in flames, at least 24 people killed and some estimates put the number of animals lost in the hundreds of millions, including many found nowhere else but Australia. Some are so great that firefighters are helpless to contain them, and all they can do is wait for the first rainfall, expected only at the end of January.

Dry-season fires are common in Australia, but the size of the area burned this year is over ten times than the average in the fire season. In 1974, a similar area was affected, but it consisted mostly of plains of weeds growing in the west of New South Wales at the end of a particularly rainy year. 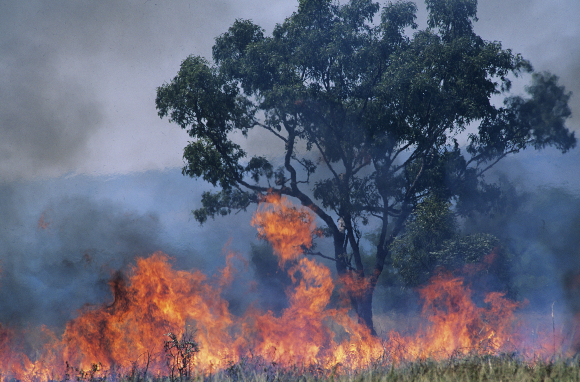 Exacerbated by high temperatures and strong winds, the fires have created difficult conditions for the firefighters. A eucalyptus tree burning. Photography: Shutterstock.

Australia, a naturally dry and hot land in most of its territory, has faced, over the last few years, significant climate change-related phenomena, manifested in increased temperatures and a decrease in the amount of annual precipitation. December 18, 2019 was the hottest day ever recorded in Australia, with average temperatures across the continent spiking to 41.9 degrees Celsius. The dry conditions have led to a relatively low water content in the natural vegetation, which therefore burns easily.

The climate change affecting Australia partially stems from natural factors. One of them is the Indian Ocean Dipole, a large-scale climate fluctuation which involves an irregular oscillation of sea-surface temperatures that occurs every ten years. It is characterized by lower sea-surface temperatures in the Ocean’s eastern region, relative to the western region, a cooling which leads to dropping levels of humidity and precipitation over the south-eastern region of Australia. A second phenomenon supplementing the extreme dryness is a northward migration of the belt of western winds that encircle the Antarctic continent – preventing the penetration of humid air from the ocean into the land. This shift in the winds stems from the atmospheric warming over Antarctica.

But global climate change looms over these natural factors. The scientific community has reached an almost full consensus that humans are much to blame for the global climate change, and it is the cause of some of the recent extreme weather phenomena in various parts of the world. 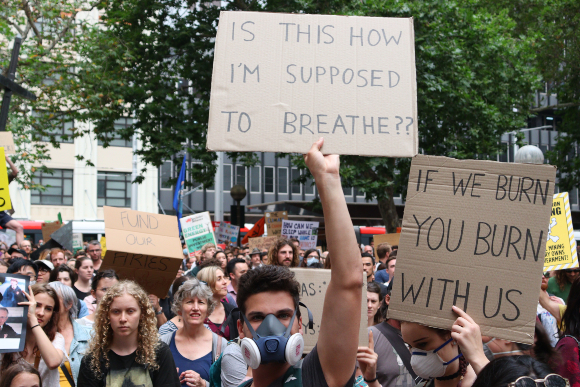 Protests against the Australian government’s inactivity in dealing with the fires in Sidney. Photography: Shutterstock.

The issue is at the center of a fierce debate in Australian politics and media, after Prime Minister Scott Morrison said in November that there is no scientific basis for the claim that cutting carbon emissions would reduce the number of bushfires. Morrison also took credit for the fact that Australia is responsible for only 1.3 percent of the global total of man-made carbon emissions, and added that an additional reduction of this amount would be negligible and without significant effect on such wide-scale phenomena.

The prime minister’s critics claim that according to the carbon emission per capita index, relative to the size of its population, Australia if a far greater polluter than other countries such as Japan, India, and even China. Many Australians feel that the fires are, to some extent, a disaster they have brought upon themselves, by not doing enough to cut carbon emissions from their homes, and failing to serve as an example to the rest of the world.

The current fire season has already emitted into the atmosphere an amount of carbon equal to half of Australia’s entire yearly emission, and the fires continue to rage. The highest air pollution ever was recorded in the Sidney metropolitan area, where some five million people live, manifested in thick smoke that has enveloped the city.

A thick blanket of smoke covered the city. Sidney choked by smoke due to the fires. Photography: Shutterstock.

Bushfires are a natural and common occurrence in Australia, and many species of plants and animals have adapted to survive in fire-prone habitats, some – phyrophile plants – even coming to rely on fires. Several species of plants, such as the eucalyptus, the Banksia, and the Spider flower, which is also prevalent in gardens around Israel, release their seeds only after a fire, thus assuring their offspring a wealth of nutrients in the ground and less competition for sunlight.

But even the strongest and tallest of trees struggle to withstand the intensity of the recent fires, and they pose a significant threat to many animals as well. Vast forested areas, among them the famous Blue Mountains National Park, have been completely consumed by the fires and will require decades before they can be restored to their former glory.