Show Me the Phoenician Money

An Israeli study reveals the Phoenician trade routes of 3,000 years ago, using a chemical analysis of their treasures

In the eighth century B.C., the Phoenician empire was commercially prosperous. The empire extended from the original Phoenician cities in present-day Lebanon and Northern Israel to settlements around the Aegean Sea, on the shores of North Africa and on the Iberian Peninsula. Commercial relations with the Mediterranean inhabitants enabled the Phoenicians to disseminate their innovative knowledge and technology – from the production of a purple dye from sea snails to the Phoenician alphabet, which served as the foundation for the development of both Hebrew and Greek scripts. In addition, they also processed and sold silver, and spread the secret of producing silver from its ores.

The first evidence for Phoenician settlement in the Western Mediterranean appeared towards the end of the ninth century B.C. But what happened before that and what motivated the Phoenicians to embark on their journeys? Some researchers suggest the existence of a "pre-colonization" period, during which Phoenicians travelled to distant regions of the Mediterranean shore and traded goods with their inhabitants before settling there. One hint for this can be found in a verse from the bible: "For the king had at sea a navy of Tarshish with the navy of Hiram; once every three years came the navy of Tarshish, bringing gold, and silver, ivory, and apes, and peacocks." (1 Kings 10:22). This chapter describes the rule of King Solomon, dating back to the tenth century B.C., and refers to Hiram, the king of Tyre in Lebanon, which was a Phoenician city. The verse describes Hiram's naval journeys and trading of precious metals and other goods, and also mentions Tarshish, which some researchers claim is the contemporary Spanish city of Tartessus. Nevertheless, it does not provide conclusive evidence for Phoenician trade during that period. 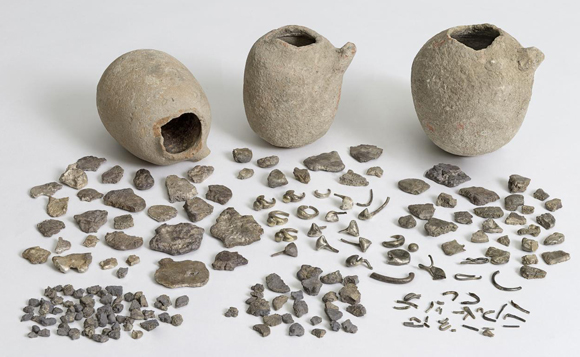 In a recent study, researchers from the University of Haifa and The Hebrew University traced the beginning of the Phoenician trade expeditions using the hidden treasures they had left behind. These treasures are pieces of pottery filled with silver and other trade metals, which people buried in temples and residential quarters. "Over 30 treasures were found in Israel, dating back 2,500 years, up until the sixth century B.C., when the coin was invented", Tzilla Eshel told Davidson Online. Eshel led the study, which was overseen by three advisors: Archeologist Prof. Ayelet Gilboa from the Department of Archeology at the University of Haifa, geologist Prof. Yigal Erel from the Institute of Earth Sciences at The Hebrew University of Jerusalem, and metallurgist Dr. Naama Yahalom-Mack from the Institute of Archaeology at The Hebrew University of Jerusalem.

An especially large silver treasure, weighing 8.5 kg, was found on Dor Beach in 1995. This is how Prof. Gilboa and her colleagues, who have been studying the site for many years, discovered that the Phoenicians settled not only in the cities along the Lebanese shore, like Tyre and Sidon, but also on the northern part of the Israeli coast. They settled there as early as the eleventh century B.C., even before they spread westwards. Smaller Phoenician treasures were also found in Acre and Ein Hofez near Yokne'am. The Israel Antiquities Authority and the Israel Museum borrowed parts of them for research.

The treasures mainly contained pieces of silver bullion. These pieces served as trade currency: Before standardized coins were invented, commerce was conducted by weighing precious metals, chiefly silver. Many of the treasures found were most likely the house owners' savings, hidden along with silver jewelry in a buried piece of pottery. At Ein Hofez, the treasure was found under the dirt floor, and Eshel says that hiding money under the floor in this manner was common practice. 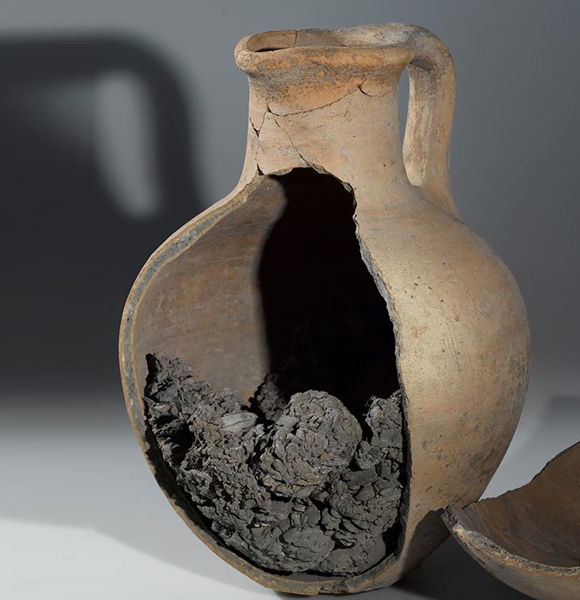 The silver reveals the trade secrets and history of the Phoenicians. The treasure from Dor Beach | Photograph: Ardon Bar-Hama, Israel Museum

The tests indicated that the Dor Beach treasure, dating to the tenth century B.C., as well as the treasure from Acre, whose dating is not as conclusive – either the ninth or tenth century B.C., contain silver originating from Anatolia, Turkey, together with silver from Sardinia. "In Anatolia, silver was produced very early on, as early as the fourth century B.C., but we did not know when the Phoenicians began trading with it," says Eshel. "The fact that Anatolia was the Phoenicians’ first source for silver, before Sardinia and Spain, was not known until now. The findings show, for the first time, that there was significant Phoenician interest in what was happening in Anatolia."

But the biggest surprise was Sardinia, since Phoenician settlement on the island had only been dated back to the eighth century B.C., and until now, silver production at such an early period was not known. The researchers suggest that the Phoenicians were the ones to bring silver production technology to the island, much earlier than was previously thought.

The treasure from Ein Hofez dates back to the ninth century – a little later than the Dor treasure. According to the tests, most of the silver came from Spain. The silver ores in Spain are low on lead, and producing silver from them is difficult – in order to do so, the development of a new method was needed, in which the silver ores had to be supplemented with lead produced elsewhere. The isotope testing clearly shows that the silver found at Ein Hofez was thus produced. If so, the Spanish silver came to the Phoenician cities in Israel as early as the ninth century B.C., before the Phoenicians settled in the Iberian Peninsula. Therefore, the researchers suggest that the precious metal was the first and foremost reason that drove the Phoenicians west, and additional reasons, such as the need for agricultural lands, came in its wake.

The cooperation between geologists, archeologists, and metallurgists, says Eshel, enabled the team to study the Phoenician treasures from every direction, understand their historical significance, and find the details hiding within the isotypes of the lead atoms. Investigating silver pieces hidden under the floor led the researchers to discover the trade routes of the ancient sailors.