Jaw of Contention:
Who Was Nesher Ramla Homo?

Six months ago, researchers from Tel-Aviv University reported the finding of two fossils, which they believed to represent a new type of ancient human, hitherto unknown to science. Now, a response published by other Israeli researchers, challenges the finding, claiming that it is merely a Neanderthal, belonging to a well-known population

An exceptional discovery was published in June this year: fossils of an ancient human were found in excavations which were carried out on the grounds of the “Nesher” cement factory near the city of Ramla. These included a part of a skull and a part of a lower jaw (mandible), with a single tooth in place. Alongside these findings, many flint tools, as well as animal bones with cut marks, were found. The findings were dated to around 120,000 years before our time.

Professor Israel Hershkovitz, Dr. Hila May and Dr. Rachel Sarig, from the Dan David Center for Human Evolution and the Shmunis Family Anthropology Institute at Tel-Aviv University, led the research on the fossils. In collaboration with colleagues from Israel and around the world, they carried out three-dimensional scans of the skull and jaw fragments, and compared them to human fossils belonging to our species, Homo sapiens, as well as to other species such as the Neanderthals (Homo neanderthalensis) and the Homo erectus. Based on this analysis, they concluded that the Nesher-Ramla Homo did not belong to either of the groups since some of its features were Neanderthal, but some were more characteristic of our species, or of other hominid groups.

The researchers propose that these fossils belong to a new ancient hominin population that appeared 400,000 years ago and lived in the Middle East and in southern Europe. They also suggested that possibly, the Neanderthals, our distant ‘cousins’ who lived in Europe and Asia up until about 40,000 years ago, originated from this population. They did not however, classify the fossil as a separate species within the Homo genus, and rather called it the “Nesher-Ramla morphological type” or “Nesher-Ramla Homo”. 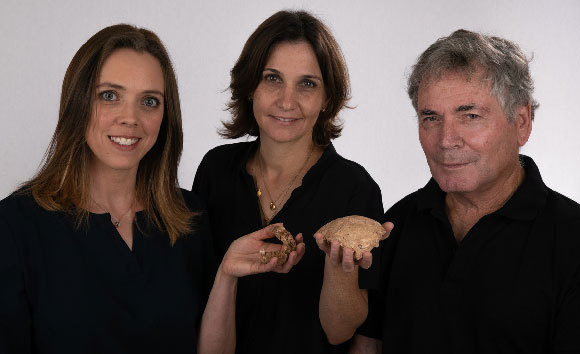 The researchers concluded that the Nesher-Ramla Homo had characteristics of a Neanderthal as well as of other groups. Left to right: Sarig, May and Hershkovitz, holding the fragments of the skull and the lower jaw (mandible) found at the site. Image | Ilan Theiler and Avi Levin, Tel-Aviv University School of Medicine

A New Type of Homo or an Old Neanderthal?

As often happens in science, the researchers’ conclusions were not accepted by all in the scientific community, upon publication of the discovery. Palaeoanthropologist Philip Rightmire said to Nature magazine that the skull appears to belong to an “early, rather archaic-appearing, Neanderthal”, meaning it has properties characteristic of more ancient Neanderthals, but still a Neanderthal. Others have argued that the uncovered fossils are too recent to represent a source population for Neanderthals and that it is far more likely that the mix of archaic and Neanderthal traits in the fossils may reflect regional variations between Neanderthal groups.

A far more detailed form of criticism, which comes from very close to home, appeared earlier this month, in a Science article authored by Prof. Yoel Rak, of the Department of Anatomy and Anthropology at the Sackler School of Medicine, Tel-Aviv University, and Dr. Assaf Marom of the Department of Anatomy at the Technion’s School of Medicine. The researchers presented a different analysis of the fossils, which led them to the conclusion that the ‘Nesher-Ramla Homo’ is nothing but a plain Neanderthal and should be simply classified as such.

Rak and Marom focused on the mandible, and compared it to twenty Neanderthal bones, 141 Homo sapiens bones, and to one bone from Homo erectus, an earlier species in the Homo genus. They summed up their article by stating “our analyses provide the evidence that the Nesher-Ramla fossil should be classified simply as a plain Neanderthal.

“The Neanderthals are quite unique, if I find a tooth, I know that it’s Neanderthal,” Rak added in an interview for Haaretz newspaper. “The chewing system that they found in Ramla is very typical, and that can easily be demonstrated with several measurements [...] but it’s a Neanderthal and only Neanderthal”. 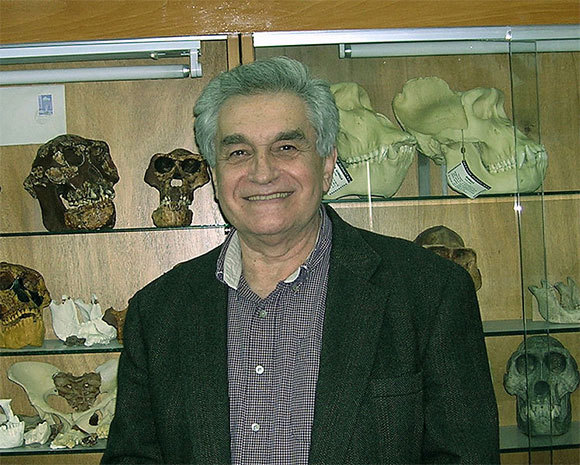 “The Neanderthals are quite unique, if I find a tooth, I know that it’s Neanderthal”. Professor Yoel Rak | Wikipedia, Tzachi Lerner

Hershkovitz and his colleagues did not leave the claims unanswered. They published their response in the same issue of Science, stating that the analysis by Rak and Marom is faulty and detailing its flaws, as perceived by them. Some of these flaws included focusing solely on the lower jaw (mandible), whilst almost completely ignoring the skull fragment found alongside it, as well as using a much smaller number of anatomical traits of the mandible as the basis for comparison - only six compared the 47 traits used for comparison in the original article, and an additional number of flaws. The main claim of Hershkovitz and his colleagues is however, that Rak and Marom are observing the findings from a binary point of view, in which a fossil can belong either to the Neanderthals or to our species. “Their world is dichotomous: there are Homo sapiens and there are Neanderthals [...]. Our study has a much higher resolution,” Hershkovitz told Haaretz, allowing for the possibility of the existence of populations that do not belong to any known group.

The researchers write in their response, that there is no doubt that the Nesher-Ramla Homo was morphologically and phylogenetically related to the Neanderthals, and thus shared some of their traits. They say however, that Rak and Marom “interpreted their results in a conservative way, without taking into account the wealth of available data and especially the complexity of human history”.

So who exactly was this Nesher-Ramla Homo? Which population did he belong to, and how close was he to the Neanderthals? We do not have the tools to answer these questions. As with other scientific disputes, the scientific community will ultimately judge, based either on further discoveries from the area, or on additional analyses of the existing findings.