First Test at
Planetary Defense
Against an Asteroid

A sunny day sometime in the future. All of a sudden warning lights come on at NASA’s Mission Control Center. A telescope scanning the motion of near-Earth objects has recognized that an asteroid a few kilometers across is on a collision course with Earth. Calculation of its orbit around the sun determines that the impact is due to occur within a few decades and to wreak devastating destruction worldwide. Humanity is facing a real threat to its existence. What do we do? Are we doomed or do we have a chance to prevent the apocalypse? 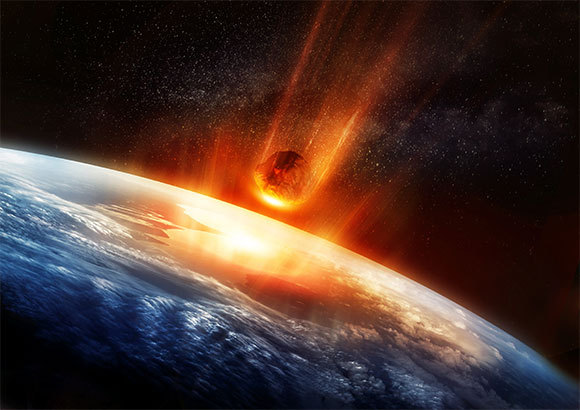 An impact that could cause immense destruction. An asteroid on a collision course with Earth | Imaging: solarseven, Shutterstock

Today, no known large asteroids in the solar system pose danger to Earth or parts of it. However, many more asteroids which we know nothing about and which could potentially endanger us, are found relatively close to us in space. Throughout history, planet Earth has experienced it’s fair share of destructive impacts and more collisions will inevitably occur in the future - unless we succeed at preventing them. Plenty of evidence for these occurrences can be seen in the scarred face of the moon, in the impact craters here on Earth, as well as in the large asteroid impact presumed to have played a major role in the famous mass extinction event that led to the disappearance of the dinosaurs.

Earth is bombarded daily from space by more than one hundred tons of particles smaller than a grain of sand, which burn up in the atmosphere. About once a year, an asteroid the size of a car reaches Earth, leaving an impressive fireball as it burns up traversing the atmosphere. Larger asteroids collide with the Earth less frequently. An asteroid the size of a football field can cause considerable and widespread damage, but reaches Earth every few thousand years on average, while a collision with an asteroid a few kilometers in diameter, such as the one presumed to have caused the extinction of the dinosaurs, is a very rare event occurring only once every several million years. According to the late physicist Steven Hawking, an asteroid impact is one of the greatest threats to the future of intelligent life in our world.

The planned asteroid defense system is designed to work similarly to the way missile defense systems such as the Iron Dome function. The Iron Dome utilizes radars to detect the launch of a rocket and then calculates its trajectory and determines whether it poses a threat to a populated area or to a site housing vital facilities. In the case that the launched rocket poses a threat, the system launches an intercepting missile towards the rocket, which explodes nearby, destroying the rocket.

Similarly, the planetary defense system uses telescopes to detect asteroids, calculates their size and their orbit around the sun and determines the extent to which they could endanger Earth. Asteroids larger than 150 meters in diameter passing close to Earth are being continuously monitored, in the case that another planet’s gravitational pull should deflect them out of orbit onto a collision course with us. The impact of such an asteroid while hitting the ground will release an amount of energy at least one thousand times greater than the energy released by the first atomic bomb, dropped on the city of Hiroshima, Japan. 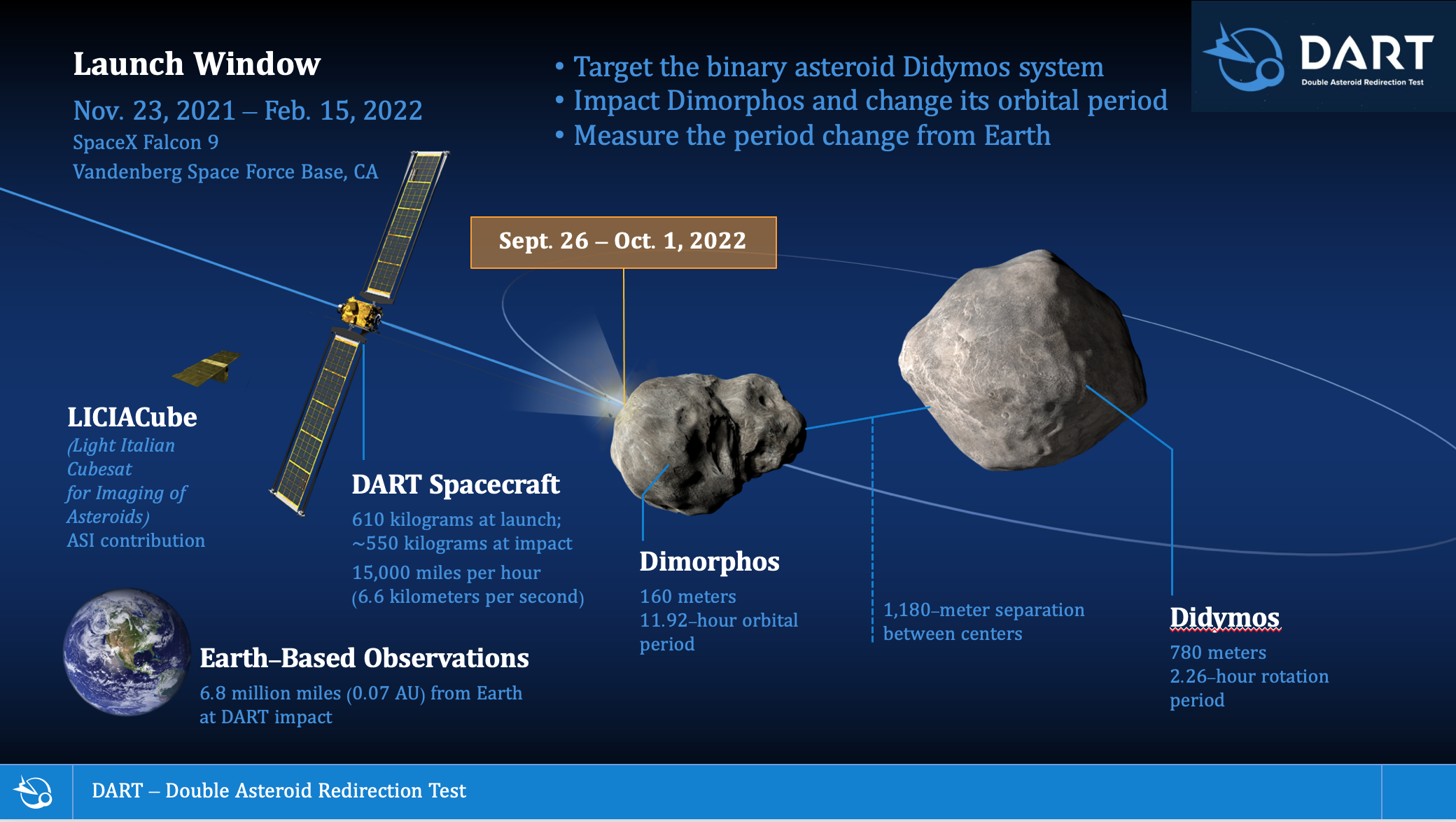 As opposed to the Iron Dome missile defense system or to Hollywood movies such as “Armageddon”, in which the threatening asteroid is detonated, the more realistic objective is to slow down the asteroid or deflect it slightly from its orbit, causing it to miss planet Earth. For the first time, NASA will be carrying out such an experiment, using a first-of-its-kind spacecraft, named DART (Double Asteroid Redirection Test). About a year after its launch, the spacecraft is expected to intentionally collide with its target - the asteroid Dimorphos. Dimorphos is about 160 meters in diameter and it closely orbits a larger asteroid of about 780 meters in diameter, named Didymos.

The DART spacecraft will play the role of the intercepting missile, with the goal of causing a slight shift in the trajectory of Dimorphos, and examining how a similar future technology may allow us to deflect dangerous asteroids from their orbits. Similar to the intercepting missiles of the Iron Dome system, the DART spaceship will be programmed to detect the asteroid and autonomously maneuver towards it, using new technologies to be tested in space for the first time. This will allow it to operate at great distances from Earth, where real-time control of the spacecraft will not be possible due to the limitations imposed by the speed of light.

The spacecraft will send images to Earth right up to the moment of impact. In addition, a small camera, carried by a secondary spacecraft that will detach from DART prior to the impact, will capture the moment of collision from a distance, documenting the particles flying off the asteroid and the crater that will form in it and transmitting the data directly to Earth.

Following the impact, astronomers will meticulously measure the change in the trajectory of the asteroid, and the European Space Agency will launch a specialized probe for a detailed post-impact survey. Investigating the impact will enable examination of the asteroid’s structure and will help improve the complex models of a spacecraft-asteroid collision. This way we will be able to improve our preparedness in case we have to divert a dangerous asteroid off a collision course with Earth.

Video: a simulation of the DART mission:

On this mission, the collision is not supposed to change the asteroid’s orbit around the Sun but merely to cause an orbital shift in its trajectory around the larger asteroid, without causing a deflection in their combined trajectory. “This double asteroid system was chosen since the larger asteroid, Didymos, allows us to easily measure the changes in the trajectory of the smaller asteroid, Dimorphos”, explains Dr. David Polishook, an astrophysicist at the Weizmann Institute of Science and a member of the mission’s scientific team.“The fact that this asteroid orbits a larger asteroid about twice a day will allow us to continue monitoring the changes in it’s trajectory more accurately. The changes can be calculated from the rate at which sunlight reflected from the main asteroid it masked by the smaller asteroid, similarly to how planets outside the solar system mask part of the light coming from the star around which they are in orbit”.

The Israeli team will be one of the few in the world to see the collision in real time. “It will occur at a time when most of the large telescopes in the world will be in daylight, but it will be nighttime in Israel. Therefore, the observations made in Israel are of great importance, in order to identify the amount and properties of material that will be emitted from the asteroid during the collision”, adds Polishook. “The effect of this impact on the asteroid will teach us how much of the collision energy was used to push the asteroid, and how much of it was wasted, or rather absorbed by the asteroid itself during its shape change –  the size of the crater formed in it and the amount of material dispersed from it into space following the impact. This type of information is also important for larger asteroids, of the kind that could cause global damage”.

A video by Johns Hopkins University about the DART mission: