The Fat that Awakes Cancer

Melanoma – skin cancer – develops from pigment-containing cells called melanocytes. It is relatively easy to discover and diagnose, as it is found on the skin. Unlike other cancer types, melanoma does not interfere with other organs and thus isn’t dangerous of itself. Melanoma tumors are relatively easy to remove by surgery; therefore, these kinds of tumors have a low mortality rate and more than 98 percent survive at least five years after diagnosis. However, sometimes the tumor becomes aggressive and sends metastases to vital organs throughout the body. In these cases, patient survival chances are very low – only 22 percent will survive five years or more. Until this very day, it wasn’t clear what caused melanoma cells to become aggressive and metastatic.

A new study, led by Prof. Carmit Levi and Dr. Tamar Golan from Tel Aviv University, discovered that fat cells in the skin are responsible for creating the melanoma cells’ shift to an aggressive phase. The study was published in the scientific journal Science Signaling, and was also featured on the journal’s cover. The research is a collaboration between investigators from Sheba, Wolfson, and Ichilov medical centers, Bar-Ilan University, the Weizmann Institute, and research institutes in France and the United States.

Cancers develop from cells that begin replicating rapidly and without regulation. However, over the last two decades, is has emerged that the development of the cancerous tumor depends not only on the cancerous cells themselves, but also on the cancer cell’s micro-environment. Lymph and blood vessel cells, for example, aid the tumor by creating blood vessels that transport oxygen and nutrients to it and assist in removing waste from it. Immune cells help by removing dead cells; connective tissue or nerve cells secrete hormones and growth factors; and fat cells provide available energy. Even the bacterial population can support the development of the tumor, or it may inhibit it. 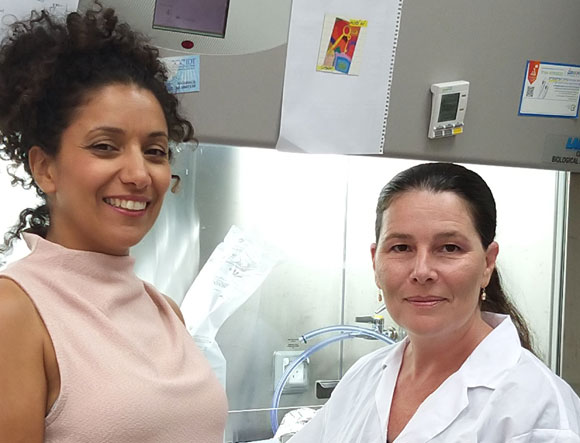 “We asked what fat cells were doing there and we started to research”. Prof. Carmit Levi (left) and Dr. Tamar Golan. Photo: Tel Aviv University

Another assay showed a change in the expression of around 24 genes which are responsible for short RNA sequences (micro RNAs). Chief among them was a gene called miR-211, whose expression decreased upon exposure to the fat cells’ cytokines. Micro RNA molecules play an important role in the regulation of protein production in the cell, and one of miR-211’s roles is to regulate the expression of a receptor for a protein called TGF beta. When this protein’s regulation is decreased, tumor cells produce more of it. “Consequently, the tumor begins to bind a higher concentration of TGF beta, and this protein is responsible for activating the melanoma cells and making them become aggressive,” says Levi. Trials in mice have shown that cancer cells with increased miR-211 expression were less aggressive and didn’t form metastasis at all. 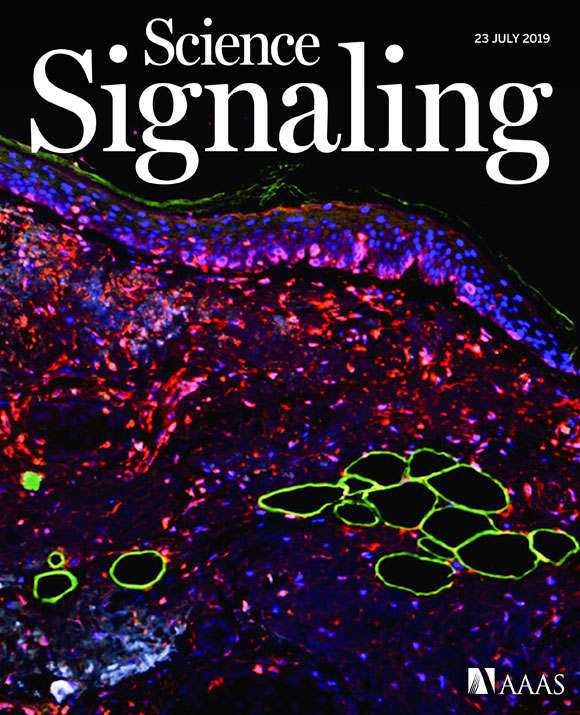 Melanocytes in the study, stained with a fluorescent dye, on the cover of the Science Signaling issue. Photo: Levi Lab, Tel Aviv University

The path ahead is still a long one

These findings led the researchers to test whether drugs that inhibit the activity of TGF beta would also inhibit the melanoma metastasis. They tested a compound (dubbed SB431542), which disrupts the activity of the TGF beta receptor, and found that in a cell culture in the lab, the compound stopped the metastatic shift in the melanoma cells and changed them back into the pre-metastatic state. This was in line with results from other studies, which applied the compound to metastatic bladder cancer cells and metastatic lung cancer cells.

The findings of this study show a connection between fat cells and the aggressiveness of melanoma cells. According to the researchers, obesity causes changes in the sub-cutaneous layer of fat and an increase in cytokine levels in the blood, and it is possible that the combination of obesity and excessive proximity to the sub-cutaneous fat cells increases the chances of metastatic melanoma. They suggest that further study of this subject would be illuminating.

Despite the successful experiment, the path to developing a medical treatment is still long, and requires animal trials then clinical trials on humans in order to test whether the tested compound can turn into a safe and efficient drug. Levi has announced that she “is looking for collaborations with pharmaceutical companies in order to develop a new drug to prevent melanoma, based on their research.” But it will still require years of testing to determine whether this therapeutic approach – disrupting the activity of TGF beta – indeed offers new hope for patients with metastatic melanoma.