During the small hours of the night, under the cloak of darkness, vampires leave their homes to forage. They move alone, almost completely silent, seeking a suitable victim. Upon finding it, they carefully approach the warm, sleeping body, cut into its skin using their sharp fangs and fill their mouths with fresh blood.

Then they meetup for a meal in the company of a friend or two who happen to be the vicinity. Vampires, after all, are friendly creatures by nature.

Unlike monsters and other imaginary creatures that fill up horror books and horror films, vampires definitely exist, and they feed on blood. Three species of vampire bats live in Central and South America, and they feed on the blood of various mammals and birds. In contrast to the legendary creature they are named after, they are not drawn to the jugular vein or carotid artery, and mostly do not kill their victims either. They prefer to bite them in their legs or backs, licking the blood and moving on their way, having used components found in their saliva to prolong the bleeding, but leaving behind a wound that heals quickly on most occasions. 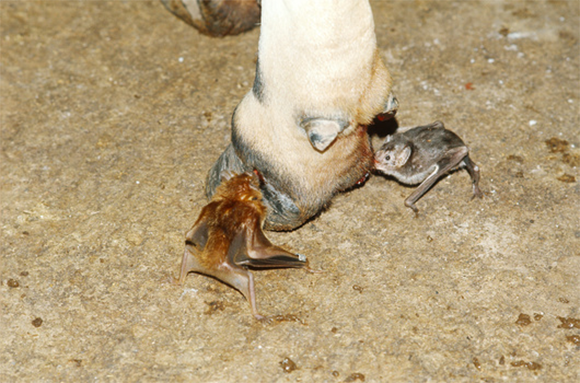 The wound that is left after the meal will heal quickly in most cases. Common vampire bats feed on a cow's leg | Image: Rexford Lord / Science Photo Library

Vampire bats are known for the friendships they form. To them, friendship could be a matter of life and death, as vampires have almost no nutritional reserves in their body. Being unable to find an animal to feed on for two or three nights in a row might mean starvation and death for a vampire bat. In order to deal with this lack of nutritional security, vampires have developed a kind of social safety net: when a vampire bat that has not fed during the night returns to the cave at dusk, it can ask a friend who had a successful hunt to share some of its meal. This “blood donation” is performed mouth to mouth, when the fully fed bat disgorges the blood into the mouth of its hungry friend. It may not sound particularly appetizing to us, but for them it is a life-saving gift.

Many studies that followed these vampire food sharing practices, have demonstrated that these donations were not random - bats prefer to donate blood to their relatives as well as to friends, who have donated blood to them in the past. Their friendships are formed gradually, and are maintained for long time periods. Recently, researchers from the USA and Panama have found that vampire bat friends also meet while foraging, and eat together, side by side.

Set Out Alone, Eat Together

The researchers followed fifty female common vampire bats (Desmodus rotundus) from a single colony in Panama. Small sensors fitted to their backs documented the bats’ locations and the presence of similar devices in their vicinity - thus monitoring the presence of the other females. They found that the vampires had left the hollow tree in which their colony roosts individually, but in many cases two of them met during the night. 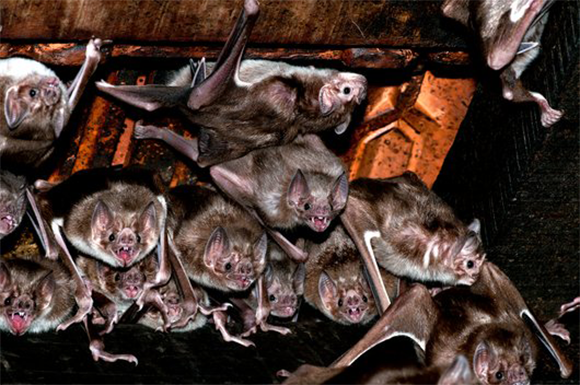 “This was not what we initially expected,” said Simon Ripperger, a bat researcher at the Smithsonian Tropical Research Institute who led the research, to the Science Magazine website. “I thought that if they did social foraging, they would go on a trip together and maybe come back together”. The bats, it appears, preferred to set out foraging on their own, but did not have an issue with sharing a food source - such as a sleeping cow - after having found it. Or at least, they had no problem sharing with their friends. The study found that the female vampires were more likely to meet with relatives and friends, with whom they also spent time with during the day, in the hollow tree where they roost, and to whom they also gave - as well as receives - “blood donations” at a time of need.

It is possible that vampires do not only agree to feed together, but actually call each other to join the meal. In addition to the documentation from the sensors, the researchers filmed some of the vampires, using an infra-red camera, while they were drinking a cow’s blood. Attached to the camera was a microphone that recorded the high pitch sounds produced by the bats, which are beyond the human hearing range. “I could see the bat’s mouth opening and closing,” Ripperger said in an interview to the Smithsonian website. The recordings confirmed that the bats produced sounds, including a call that the researchers have not heard before, and that was produced only during the hunt. The calls attracted more and more bats, but these were not always warmly welcomed: at times the first bat would drive them away and prevent them from reaching the wound. In other cases, however, they licked the blood side by side. “I could tell there was a lot of communication going on while feeding.” Ripperger concluded.

Vampires feed together on a cow

An Unfamiliar Aspect of the Vampire's Life

Social feeding can have its benefits, especially for the bat that arrives second: if the first bat has already wounded the animal, the second bat can draw blood from the same wound and save time and effort. What is then the benefit for the first bat? It is possible that, as in the case of blood donations to a hungry bat, it is about friendship and “quid pro quo” relations. Today I found a food source and called you, and tomorrow you might be the first to find juicy prey and call me.

This is the first study that looked into social interactions of vampire bats outside of their cave or the hollow tree that serves as their home. Gerald Carter, a behavioral ecologist at Ohio State University and Ripperger’s research partner, told Science that such studies will allow to observe relations not only between bats from the same colony, but also between subjects from neighbouring colonies. “I see this as laying the groundwork for a whole other aspect of [vampire bats’] social lives which we’ve basically been ignoring up until now,” he says. “We’re just scratching the surface.”