The Climate Crisis: Harder and Clearer Than Ever Before

A new report by The Intergovernmental Panel on Climate Change points to a tight correlation between greenhouse gas emissions and global warming, and calls for measures to be taken before it is too late

This summer has reminded us how devastating climate change can be. Extreme heat waves hit North America, severe floods swept through China and Europe, and massive fires reached as far as the North Pole. A new report summarizes current human knowledge in the field, and warns that unless we act quickly enough, the repercussions will be far more devastating.

On August 9th 2021, the Intergovernmental Panel on Climate Change (IPCC) published the first part of its sixth assessment report, summarizing the most up-to-date scientific understanding of the climate system and of global climate change. According to the IPCC, the current report is not only the most updated, but also the most comprehensive and high quality report on the subject. It makes use of the many scientific advances achieved during the last decade, which greatly improved our understanding and predictive capability on the subject of global warming.  The authors of the report analyze past global climate changes and predict future global climate shifts, taking into account different emission scenarios, detailing a wide array of global and local effects.

IPCC scientists have worked hard to produce a professional report, acceptable by all countries and free of politics. Hundreds of scientists from 65 countries have participated in the process, having reviewed over 14,000 scientific papers, referenced in the report. Following this, the report was peer reviewed by global experts and government agencies from all over the world, with over 78,000 comments being submitted. The hundreds of composing scientists addressed these comments, incorporating the conclusions into the final report, which spans some 4,000 pages.

The rise in measured Earth surface temperatures until 2015 and the expected future rise, according to the different greenhouse gas emission scenarios of reduction (shades of blue), maintenance of the current volume of emission (yellow), or increased emissions (shades of red) | source: IPCC report

The Climate Crisis is Already Here

The report reinforces past findings, indicatng with almost complete certainty that the world is growing warmer. Rapid and large-scale changes have taken place in the air, land and sea, with the main driving force for these changes being greenhouse gasses originating from human activity. According to the report, a rise of 1.1 degrees Celsius in world surface temperature, relative to the perennial average in the early days of the Industrial Revolution (1850-1900), has already occurred. The last decade has been about 0.2 degrees warmer compared to the preceding decade, and the concentration of carbon dioxide in the air has reached about 410 parts per million (ppm). The rise in temperatures in mainland areas is more significant, constituting about 1.6 degrees Celsius since industrial times.

The report authors point out that global atmospheric carbon dioxide concentrations are the highest they have been in the last two million years, and that the rates of sea level rise,  global ice coverage decrease and glacial retreat are the most severe in the last millenia. The ocean has also grown warmer, and has become more acidic and poorer in oxygen than it has been within the last 26,000 years. Additionally, extreme cilmatic events such as heat waves and floods, as well as droughts and fires in various regions, have become stronger and more frequent. The report strengthens the correlation between extreme local climate events and human-driven global warming, and indicates that every place on Earth has already experienced extreme climatic events of one kind or other.

Predicted temperature rise, according to the different scenarios detailed in the report. The top two scenarios are based on a substantial reduction in greenhouse gas emissions, the middle scenario represents maintaining the current emission volume, while the bottom two reflect an increase in emission levels | from the IPCC report

Last Chance to Comply With the Paris Agreement

According to the report, as temperatures continue to rise, the consequences  will become more disastrous and their extent will become greater. Only highly ambitious and immediate actions will allow us to meet the commitments of the Paris Climate Agreement, in which the goal of limiting global warming to 1.5 degrees Celsius, compared to pre-industrial levels, was set. To meet these goals, it would be necessary to reduce all emissions of carbon and methane by mankind to zero by 2050 - a goal no longer attainable with a slow and gradual reduction in emissions. The IPCC report predicts that should humanity fail to reduce greenhouse gas emissions, we will surpass the two degrees threshold by the middle of the century if not sooner. Such warming will resuly in severe damage to our natural systems as well as to agricultural produce, infrastructure and more.

The authors specify that so far the oceans and lands have absorbed nearly 59 percent of all carbon dioxide emitted by mankind, having moderated thus the extent of global warming. The more greenhouse gasses we emit, the less will the natural environment be capable of absorbing them, and thus the greater the part of the emitted carbon that will remain in the atmosphere by the end of the century, making climate changes more rapid and acute. Should we continue to increase our emission levels, the world is expected to grow warmer by three to five degrees by the end of the century. 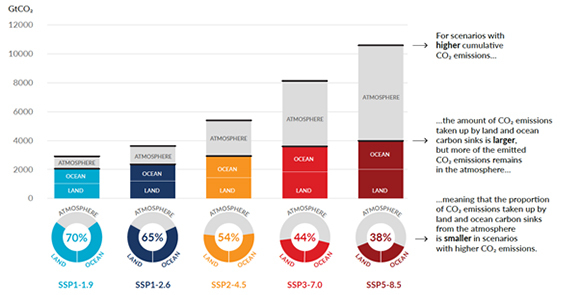 In the optimistic scenarios (left), only a third of the carbon dioxide we emit accumulates in the atmosphere (marked in gray in each column). In the more pessimistic scenarios, the oceans and land absorb only about 40 percent of greenhouse gasses | Source: IPCC Report.

Scientific progress and improved modelling enable better understanding of how different world regions are expected to become affected by climate change. A global atlas launched alongside the report makes it possible to examine the changes occurring in the different parts of the world, as well as to make local forecasts. For example, while vast parts of Africa are expected to endure excessive rainfall by the end of the century, a concomitant reduction of up to 25% in precipitation levels is expected in different parts of the Mediterranean.

While many of the effects of climate change occur gradually, some are expected to be sudden and irreversible. The authors of the report note that although many world systems react slowly to temperature changes, the changes in them are expected to be rapid and irreversible once a certain threshold is crossed. We may thus lose the Gulf Stream that warms Europe, all of the world’s glaciers, or cause permafrost thawing to release excessive amounts of greenhouse gasses. While noting that the probability of most of these scenarios within the current century is low, the authors indicate that they may occur in the more distant future due to the slow response of the relevant world systems to climate change. Increased greenhouse gas emissions will increase the risk of these dramatic changes occuring, with real concern of losing the Amazon Rainforests in the coming century.

Follow-up reports by the IPCC, expected to be published in the coming year, will discuss the implications of climate change and the ways to deal with them and to prepare for the expected changes. Although there seems to be no escape from the disastrous consequences of the climate crisis, the authors of the report emphasize that “every tonne of carbon matters”. Decision makers, businesses and individuals can bring to an immediate reduction in emissions that will reduce the severity of this crisis. Thus, IPCC scientists express hope that this report will lead to the formulation of ambitious emission reduction goals at the UN Climate Change Conference, scheduled to take place in Scotland in November.